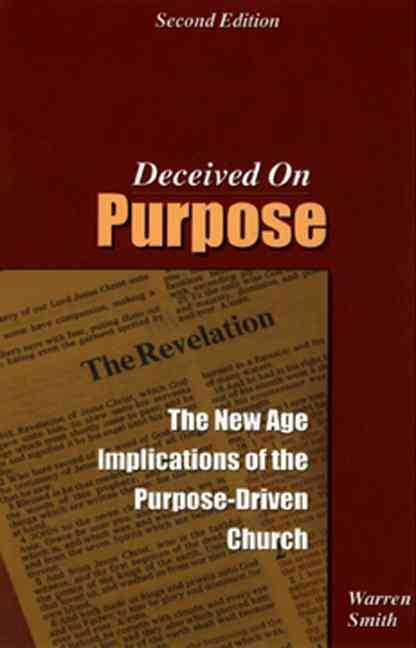 Deceived On Purpose is probably the most important contribution in the ongoing discussion about Rick Warren’s The Purpose Driven Life and all things Purpose Driven. It is one of only a couple of book-length treatments of the subject and the one that brings the most to the table. The author, Warren Smith, is a former New Ager who, after being saved, researched and has written extensively on the topic of spiritual deception. Having been immersed in the New Age movement for many years, he is sensitive to the inroads of New Age beliefs into Christianity. He says “Because of my New Age background, I have written this book Deceived on Purpose to specifically address some of the New Age implications of these purposes [for the church].” His discussion of the New Age implications of The Purpose Driven Life merits consideration by all concerned believers.

The author is clear from the beginning that this book is not a mix of positives and negatives. He believes that Rick Warren is leading the church astray and will mince no words in defending the Body of Christ. Leafing through the book, the reader might be surprised to see how much of the book is dedicated to a discussion of Robert Schuller. As a matter of fact, I suspect the book has more references to Schuller than to Warren. Why this apparently misplaced emphasis? Smith contends that many of Warren’s ideas and beliefs were shaped by Schuller. Hence to learn about Schuller is to learn about Warren.

Smith leaves no stone unturned in exposing Robert Schuller as a major player in the New Age movement. Schuller has often invited New Age teachers to appear on his show and preach from his pulpit. New Age courses have been taught on the campus of his church, New Age materials are sold in the bookstore and he often declares his affection for the teaching of New Age gurus. It seems his New Age beliefs are common knowledge amongst New Agers as they consider him a leader who may be able to bridge the increasingly blurry gap between the New Age and Christianity.

Ironically and alarmingly, Schuller is also a major player in the Christian church. Having spent great attention on exposing Schuller as a false teacher, the author then shows the connection between Schuller and Rick Warren. Warren trained extensively under Schuller and acknowledges him as one of his primary influences. Many of the concepts and even sentences from The Purpose Driven Life are taken directly or almost directly from Schuller’s writings, and these were in turn culled from New Age material. The author provides many examples of this, but I will contain myself to one. In this brief section Warren quotes from the New Century Translation:

The Purpose Driven Life by Rick Warren – “The Bible says, ‘He rules everything and is everywhere and is in everything.'”

Prescriptions for Living by Bernie Siegel – “God is in everyone and everything.”

There are many similar (and even more clear) examples where Warren has borrowed or even plagarized the writings of Schuller. The conclusion we must draw if that Schuller is as corrupt as Smith portrays him, we must necessarily be suspect of Warren and any others who have trained under Schuller. While they are not covered in great detail, the author dedicates a small amount of time to exposing The Message and the writings of Bruce Wilkinson as having a similar New Age bent. Wilkinson was another man who was profoundly influence by Schuller, and thus by the New Age.

It is no great surprise that this book has been published by a small publishing company (Mountain Streams Press). While it is well-written, well-researched and convincing, it deals with a subject matter most publishers will want to avoid. Despite being confined to small distribution channels, I was glad to see that it is in its second edition and that a third is underway. I believe it has many important things to say and that Christians need to evaluate the teachings of Warren to see if they are consistent with the Scriptures. “In these times of heightened danger and treacherous deception, we must always go to the Lord for truth and direction. Christians following deceived leaders will only end up deceived themselves. We must always measure everything by the true Word of God. Seek the truth and you will find it. Knock and the door will be opened. Ask God in sincerity and in true faith, and He will give you the wisdom you need…May we always have a love of the truth. May God give us wisdom and spiritual discernment as we seek to contend for the faith.” (Page 180)

Warren has written a book that is alarming, but not apocalyptic – a book that shows a love for the church and a godly concern for her welfare. I highly recommend this one.