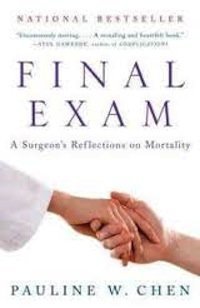 Buy from Amazon
I assume that Pauline Chen’s experience is quite typical of doctors. She began medical school dreaming of being a hero and of saving lives but had little idea of just how big a role death would play in her chosen profession. It did not take long for her to learn that death would be a regular occurrence and one for which she was largely unprepared. She found that her vocation, which is premised on caring for those who are ill, also systematically depersonalizes dying. Final Exam: A Surgeon’s Reflections on Mortality, another book I found on the New York Times list of bestsellers, represents her attempt to come to terms with this brutal truth of the medical profession.

In a profession made attractive by the power to cure, it is rare to find the young medical student who dreams of caring for terminal patients. But in a society where more than 90 percent of us will die for a prolonged illness, physicians have become the final guardians of life, charged with shepherding the terminally ill and their families through the intricacies of the end. Most patients and their families fully expect physicians to be able to comfort and provide that support. For doctors, this care at the end of life is, as this book’s title implies, our final exam.

Chen’s next words are revealing. “Unfortunately, few doctors are up to the task.” The problem is that most doctors quickly learn to suspend or suppress any shared human feeling for dying patients, as if this is the key to being a successful physician. Chen found that these lessons in denial and depersonalization began as early as her first encounter with death in the gross anatomy dissection lab where she spent weeks dissecting a cadaver, and that they continued through her residency and practice.

The structure of the book is such that it is divided into three sections. The first, “Principles,” focuses on the early lessons she learned about death while a medical student. She discusses the early terrifying experiences of dissecting a corpse, of seeing death up close for the first time, and of emotionally distancing herself from what she was doing and seeing. The second part, “Practice,” goes to the heart of clinical work, revealing how “professional responses not only manifest but perpetuate themselves.” The final section, “Reappraisal,” briefly explores how change is possible and how there have been some hopeful transformations in end-of-life care.

The real heart of the book is the section dealing with “Practice.” It is here that the author wrestles with difficult issues and shows how most doctors are unable to cope with end-of-life care. She shows that they will often avoid being fully honest with their patients and their patients’ families. They will even do what seems inhumane and even cruel–avoiding difficult conversations with their patients or increasing treatment and providing hope even when the situation is hopeless. While fear of litigation certainly provides some impetus (more than a few doctors have been sued for suggesting there is no hope and then being proven wrong), the most common driving force is fear. Doctors are simply fearful and unequipped to help their patients face death with dignity. On one hand doctors need to distance themselves from their patients lest they become too emotionally involved and become paralyzed or traumatized. And yet when they distance themselves they are apt to view patients as something less than fully human and worthy of human dignity.

Because the book is written from a secular perspective it stops well short of a biblical position and solution. And yet the author’s reflections on mortality are fascinating and gave me much food for thought. In an age where medicine has the ability to prolong life far beyond what would sometimes seem natural, Christians have many issues to wrestle with when it comes to end-of-life or palliative care. We need to affirm the value and dignity of life and cannot stoop to arguments used by those who promote agendas of euthanasia. But in our fight to preserve life it seems we could also err in irrationally prolonging life when all hope is gone; we could err in telling less than the truth and in promoting difficult and painful treatments that are known to be useless. We must not be people who fear death, but instead we must be people who trust in God’s sovereignty.

Death has always been an important issue to Christians, but is likely to move to the forefront of critical issues in the coming years. Not only are medical abilities increasing so people can be kept alive for longer, but society’s morals are crumbling and more people believe in the right of patients to take their own lives. Issues surrounding how we allow people to die, when we allow people to die, and just what constitutes death are ones that Christians can no longer ignore. Final Exam gives a physician’s perspective and numerous examples of the intricacies involved in this discussion. Even if Chen does not wrestle with the ultimate issues, she does provide a valuable perspective and one that can lead into useful, biblical discussion.