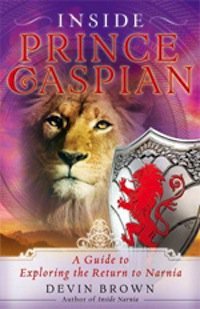 Buy from WTS Bookstore
Inside Narnia was one of the many books published in advance of the most recent movie adaptation of C.S. Lewis’s The Lion, The Witch, and the Wardrobe. The book has proved a success, going through six printings since its release in 2005. In the book Devin Brown, a Lewis scholar and aficionado, offered a detailed look into the world of Narnia, digging far beyond the surface, and exploring this magical world. As I had just read The Lion, The Witch, and the Wardrobe with my children, I decided to read this as a commentary of sorts, to see what I had missed and what I would want to look for the next time I read the book. I learned more than I would have thought possible. Reading Inside Narnia greatly enhanced my understanding of C.S. Lewis, of the stories he wrote, and of the worlds he created. Because I so enjoyed Brown’s first book, I was thrilled to see that he written a second book in anticipation of the imminent release of Prince Caspian, the second film in the Narnia series.

The book begins with an explanation of how Prince Caspian came to be. It will surprise many readers to know that Lewis first began another story that was intended to stand as the second in the series. But this book led to a false start and a story that was left unfinished. After wrestling for some time, Lewis experienced a burst of creativity and, in eighteen months, completed four new works, one of which was Prince Caspian. After providing the book’s background, Brown looks to the film of The Lion, the Witch, and the Wardrobe. He lists three areas where he felt the movie improved upon the book and then several ways in which it falls short. He does this hoping that some of the oversights will be corrected in the film for Prince Caspian. Then, as he did in the first book, he turns to whether or not the Narnia books are meant to be understood as allegory. He is careful to point out, as do most Lewis scholars, that Lewis did not intend for there to be a one-to-one relationship between elements of Christian theology and his stories. So, for example, we should not understand that there is a direct relationship between Aslan and Jesus, the cross and the Stone Table. This is crucial to a right understanding of the stories, the characters, and to what Lewis intended to convey through them. Brown also suggests, even if not dogmatically, that the books are best read in the order of publication rather than in the revised chronological order. This would make Prince Caspian the second in the series rather than the fourth. This is, of course, the order the films will follow.

Inside Prince Caspian then follows the pattern Brown established in his first book. He dedicates one chapter to each of the chapters of Prince Caspian and provides ongoing literary analysis. Because Inside Prince Caspian is primarily a literary analysis, it does not focus primarily on the story’s religious elements (though there are many other books that do this). Devin focuses instead on language, on consistencies and inconsistencies in this story and Lewis’s other writings, on symbolism and hidden meanings, and on the life experiences that stand behind the story. He interprets Prince Caspian through the wide lens of Lewis’s vast body of writing.

As an author and writer, this book revealed to me all kinds of good opportunities to look to Lewis for examples or for illustrations. As a reader it revealed to me just how much I missed in reading the book. As a Christian it revealed the depth of spiritual insight Lewis managed to relay even in what seem to be such simple stories.

Literary analysis may sound terribly dull and disinteresting; I found it anything but. I enjoyed both Inside Narnia and Inside Prince Caspian and commend both to you. If you have read The Lion, the Witch, and the Wardrobe and Prince Caspian you owe it to yourself to read these books as well. Read the stories, read the literary analysis, and then watch the movies. I am sure this will enhance your enjoyment and understanding of it all. Just trust me on this one.