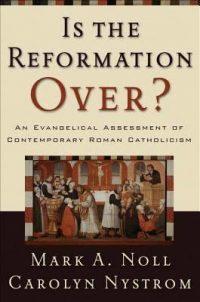 Yesterday I provided the first part of a critical review of Is The Reformation Over? by Mark Noll and Carolyn Nystrom (read it here. I wrote a summary of each chapter, allowing the reader to understand the author’s arguments as they reached the conclusion that the Reformation is, indeed, over. Noll and Nystrom feel that the most important differences between Catholic and Protestant theology are no longer based on issues of soteriology (how people can be saved) but now primarily concern issues of ecclesiology (the nature of the church). Today I would like to provide some analysis of the book and the author’s arguments.

I would like to preface my analysis by expressing that the authors displayed a clear bias throughout the book. Mark Noll is an evangelical, and I believe Carolyn Nystrom is as well, and in this book they spend a great deal of time expressing harsh criticism of evangelicalism. While I am Protestant and am perhaps being sensitive, it seems that they did not return the harsh rhetoric towards the Roman Catholic Church. We can see this bias displayed in the chapter discussing conversion from one tradition to another. In this section the authors provided several examples of evangelicals who converted to Catholicism, but no examples of conversion from Catholicism to Protestantism. This type of conversion is, in my experience, far more common and my church stands as an example. It is probably safe to say that our church is primarily composed of former Roman Catholics who left their church and then became believers. The bias is also clear in the chapter discussing ecumenical dialogues. The authors blame evangelicals for expressing anti-Catholic beliefs, but they provide no similar evidence for anti-Protestantism. They also provide no historical framework of persecution and Inquisition to show why Protestants expressed such distrust of the Catholic Church. Thus the reader needs to understand that this book expresses harsh attitudes towards Protestantism without corresponding harshness towards Roman Catholicism.

Throughout the book the reader will note that the authors continually minimize theological considerations. Their overarching argument, as I expressed in the introduction to this review, is that the core disagreement between evangelicals and Roman Catholics is ecclesiology. This allows Noll and Nystrom to minimize theological disagreements as being of secondary importance. The authors’ main strategy is not to thoroughly examine each point of doctrine where evangelicals disagree with Catholics (and sometimes vice versa), but to prove that issues over which Protestants often express concern are merely minor considerations in the larger area of the nature of the church. “In sum,” they say, “the central difference that continues to seperate evangelicals and Catholics is not Scripture, justification by faith, the pope, Mary, the sacraments or clerical celibacy – though the central difference is reflected in differences on these matters – but the nature of the church” (page 237). If the reader does not agree with that premise, he will likely not agree with most of the author’s major conclusions.

It is clear that in a book of this size the authors cannot address every theological issue that seperates Protestant from Catholic. Yet there were at least two major disagreements that received no attention. The first of these is purgatory. The Catechism, which the authors often quote favorably, has this to say about purgatory: “All who die in God’s grace and friendship, but still imperfectly purified, are indeed assured of their eternal salvation; but after death they undergo purification, so as to achieve the holiness necessary to enter the joy of heaven.” Needless to say, purgatory is a view that cannot be supported by a Protestant, biblical understanding of salvation. Purgatory calls into question the sufficiency of Jesus’ suffering, for how effective was Christ’s death if it needs to be supplemented by our own suffering? Did not Jesus die so that we did not need to suffer this type of torment?

A second issue, and one that is perhaps even more important, has to do with the Eucharist. The authors deal in some depth with transubstatiation in which the bread and wine become the real presence of Christ. Yet this is not the most significant concern posed by the mass. Of far more importance is the understanding of the mass being a propitiation for sin. Protestants, having searched the Scriptures, believe that Christ’s sacrifice was made once and had perfect, total efficacy. It does not need to be further supplemented or repeated in any way. Yet the Roman Catholic Church teaches that each celebration of the mass is a new, propitiatory sacrifice of Jesus Christ.

These two issues are of critical importance, for they call into question the efficacy of Christ’s sacrifice. Despite this, the authors overlook them altogether.

There are several places in the book where the authors examine these issues in general, and justification in particular, and declare that there is no longer any critical difference between the Catholic and Protestant understandings of these pivotal issues. “If it is true, as once was repeated frequently by Protestants conscious of their anchorage in Martin Luther or John Calvin that iustificatio articulus stantis vel cadentis ecclesiae (justification is the article on which the church stands or falls), then the Reformation is over” (page 232). Time and space fail me to provide a detailed apologetic for the Protestant understanding of justification, but suffice it to say that the authors do nothing – absolutely nothing – to prove that an informed understanding of the biblical view of justification is now shared between Protestant and Catholic. In fact, the discerning reader will wonder whether the authors even truly understand the Protestant view of justification. Clever wording and ambiguous statements in ecumenical dialogue does not constitute change within the Catholic Church. Perhaps a repeal of the anathemas of the Council of Trent, anathemas which were affirmed at Vatican II, would prove that change had occured. But as it stands in official Roman Catholic statements of theology, the crucial differences remain.

Conspicuous by its absence is any real examination of Catholic or Protestant theology in light of the Scripture. There are very few quotes from the Bible and certainly very few attempts to examine either system of doctrine through the Bible. Page 248 finds the authors defending Catholicism by showing that the traditional complaints against Catholicism now exist in Protestantism. But what of Scripture, our guide? Writing, as they are, for a Protestant audience, it seems that proving all things from Scripture would advance their argument. Yet, it appears, they are unable to do so. We see this also in the discussion of justification. “The Roman Catholic Church now [post-Vatican II] articulates positions on salvation – even on justification by faith – that are closer to the main teachings of the sixteenth-century Protestant Reformation than are the beliefs of many Protestants, indeed, of many evangelical Protestants. Strange as it may seem to put it this way, the ECT documents present what can only be called a classically orthodox depiction of Christian salvation, primarily because they empahsize and build upon these official Catholic teachings” (page 180). But again, what of Scripture? Should we not allow Scripture to be our guide as we examine these issues?

The endorsements for this book would lead the reader to believe that it represents a high level of scholarship. J.I. Packer says, “Here is superb thelogical journalism.” David Wells writes that “This book offers a superbly researched, documented and engagingly argued case…” While the book does represent interesting research, I found the argumentation unconvincing. At the beginning of the fifth chapter the authors write, “Comments such as the following are heard frequently when evangelical Protestants talk about Catholicism” (page 115). They go on to list six comments, including “There is much I admire about the Catholic faith. But Catholics think Mary is a god, and the pope is their dictator – and then there is the whole question of celibacy;” “The people in my Baptist Sunday school class think that the Catholic Church is a cult. Should I argue about that?;” “Do Catholics believe they Bible? Are they allowed to read it?;” “I wish Catholics believed in grace. How can you be a Christian if you don’t believe in salvation by grace through faith?” It seems to me that people who ask such basic, uneducated questions may be convinced by this book. Protestants who have created a mere caricature of Roman Catholic theology and practice may well be convinced. But those who have researched the issues and know the heart of the disagreement will remain unswayed.

Is the Reformation Over?

In the final analysis, the authors have failed to understand the core disagreement between Protestants and the Roman Catholic Church. There are clearly important disagreements about ecclesiology, and these are disagreements that are unlikely to be reconciled until Protestants are willing to accept the papacy. But there is a far deeper disagreement. At the heart of the Reformation was the gospel, which, incidentally, is a word and concept the authors use only rarely. The gospel message of justification by grace alone through faith alone, despite the authors’ insistence to the contrary, is not present in official Roman Catholic doctrine. I have little doubt that there are some, perhaps many, within the Church who are truly saved. But Roman doctrine is as opposed to biblical theology today as it was during the Reformation.

Is the Reformation Over? proves that Protestants and Catholics can, indeed, enjoy unity. But this unity must be at the expense of the gospel. We can embrace Roman Catholicism as a faithful expression of biblical faith, and enjoy ecumenical unity, but it will cost us the very thing Jesus Christ entrusted to us – the Good News that we are justified by grace alone and through faith alone. It is left to the reader to decide if the benefits outweigh the cost.

Whether or not you are interested in reading Is the Reformation Over?, I would highly recommend reading R.C. Sproul’s Getting the Gospel Right

, a thorough examination of the issues surrounding the gospel and ecumenism.