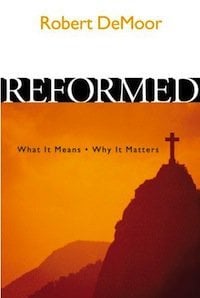 Reformed: What it Means, Why it Matters is a concise, entry-level introduction to the distinctives of Reformed Christianity. It is intended to be a guide for inquirers who are seeking direction for which church to attend, for new Christians who are surveying the different traditions within Christianity and anyone else who has questions about the Reformed faith. In just four chapters and 71 pages, Robert De Moor seeks to introduce these Reformed distinctives.

Unfortunately, the book takes a misstep right from the outset. On page 7, only the third page of the first chapter, the author writes, “We’re part of a family that includes Orthodox, Roman Catholic, Anglican, Evangelical, and a host of other churches that confess and practice the Christian faith.” The book’s ecumenical leanings are further revealed later in the text where we read, “And to the best of our ability we’ll need to work … right along with our Roman Catholic, Pentecostal and Baptist sisters and brothers” (page 17). Later still he writes, “We preach the same gospel of Jesus Christ [as Catholics] and him crucified and risen. We share in the same Spirit and celebrate two of the same sacraments. … So we know that we’re called to work together even if we can’t always worship together. And we long, pray and work for the wonderful day when we can do that too” (page 57). It becomes clear that the author is sympathetic towards Catholicism and regards Rome and Protestantism as holding to the same gospel. At the same time he correctly affirms that we do not currently have enough unity to worship together and affirms that the Reformation, from which Reformed Christianity was birthed, was necessary. It is a strange mix, wherein he seems to understand the truth, but not the falsehood. It makes me wonder how fully he understands the Gospel if he is willing to say that the Reformed and Roman Catholic Gospel are the same.

Finally, the author makes a serious error in his discussion of baptism where he writes about grieving parents who wanted their child, who had just died, to be baptized so the parents could have assurance that he would go to heaven. “But baptism would not have washed away the sin of their child. Only Jesus Christ, who died on the cross two thousand years ago, could do that. Through Jesus’ death God saved their child. And through their faith God applied the cleansing merit of Christ’s death to their baby” (page 37). This smacks of the “covenantal regeneration” that dwells primarily within the Dutch Reformed Church tradition.

These three concerns impact only a small area of the book, the rest of which is quite solid. The author does a good job of introducing Reformed doctrine in an accessible way, often turning to acronyms or alliteration. For example, he teaches that Reformed Christianity understands God to do five things for us: Control, Communicate, Confirm, Cleanse and Claim. He shows, and proves, that the teachings Reformed types hold dear “are nothing more and nothing less than the key teachings of the Bible itself” (page 21).

Throughout the book are sidebars which contain factoids, word definitions, fast forwards (if you wish to skip over a section), “so what’s” and so on. These are often helpful tidbits that do not fit the flow of the main text.

De Moor concludes with a parting thought where he writes, “Undoubtedly I’ve left a lot of material out. I’ve oversimplified and even misrepresented. But that’s inevitable when we try to reduce into print the riches and variability of a living, breathing, growing, dynamic tradition” (page 62). I am less concerned with his oversimplifications than with his misrepresentations. This book has several that are serious enough that I cannot recommend it, at least as a book to give to the target audience. Rather than providing a glance into the Reformed tradition, it seems instead to provide an alarming glance into one particular denomination (The Christian Reformed Church) – one that does not accurately represent “Reformed.”