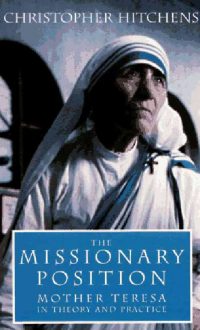 “If there is a hell, Hitchens is going there for this book.” So said the New York Press in respose to The Missionary Position, subtitled Mother Teresa in Theory and Practice. Written in 1995, during the height of Mother Teresa’s popularity, this book was Hitchens’ attempt to debunk the myth that was, and remains, Mother Teresa.

Written from the perspective of one who clearly is not a Christian, this book has been likened to a cruise missle. It is narrow in scope, yet devastatingly effective, for it strikes right to the heart of the matter. How are we to reconcile Mother Teresa, who cares for the sick and destitute, and Mother Teresa who holds hands and laughs with the wife of a brutal and notorious dictator? How are we to reconcile her desire to live out Christianity when she accepts million-dollar donations from the likes of Charles Keating?

The most significant chapter in this book is one which displays Mother Teresa’s overwhelming hypocrisy. The author reproduces a letter that was sent from Mother Teresa to Judge Lance Ito, seeking clemency on his behalf. She suggests that while she knows nothing of his business dealings (in which he defrauded people of $250,000,000) what is more important is the service he has rendered to the poor. She asks that the judge to do what Jesus would do, which she evidently believes would be to let him free. Los Angeles deputy D.A., Paul Turley wrote a response to Mother Teresa, suggested that she should return the $1.25 million dollars given to her by Keating, promising he would return it to the rightful owner. He received no response.

Many others have written about Mother Teresa and have chastised her for this type of hypocrisy. Many have validated the claims that her care for the poor was more in providing a comfortable place for people to die than in seeking to heal them. Many have shown that she hoarded tens or hundreds of millions of dollars for no apparent purpose when these funds could have gone to build the finest hospitals and orphanages in India. And many Christian writers have shown that her faith bore only a passing resemblance to Christianity. But, as far as I know, this is the most significant (and only book-length treatment) of the subject, though at a mere 98 pages it reads more like an essay than a book.

As one who reads primarily books written by professed Christians, I was taken aback by Hitchens’ prevailing attitude. “Given how much this Church allows the fanatic Mother Teresa to preach, it might be added that the call to go forth and multiply, and to take no thought for the morrow, sounds grotesque when uttered by an elderly virgin whose chief claim to reverence is that she ministers to the inevitable losers in this very lottery” (page 59). He is cynical, angry, hateful and sarcastic all at once. He despises the hypocrisy he sees in Mother Teresa and seems happy to extend his disillusionment to religion in general. He attacks not only Mother Teresa, but also Roman Catholic doctrine and practice, and even further, extends his attacks to Christianity and the Bible, especially Christian teaching on the sanctity of human life. And throughout, he uses only four footnotes, providing little evidence to support his claims. Despite all that, he argues effectively and some may even say, devastatingly.

In some ways this subject hardly seems to matter anymore, now that Mother Teresa has long since died. Yet her legacy lives on. Mother Teresa is still lauded as a hero by Catholics, Protestants and people of every other creed. It seems amply clear to those who are willing to look that her legacy is largely ficticious.