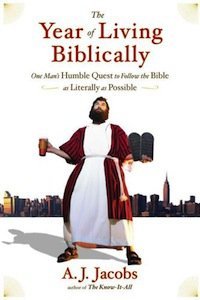 Buy from Amazon
A.J. Jacobs, an editor at Esquire, must have a lot of time on his hands. Several years ago he decided to read Encyclopedia Brittanica from cover to cover, apparently in a quest to become the smartest person in the world (though a subsequent attempt to prove his knowledge on “Who Wants To Be a Millionaire?” showed that he had a long way to go (he missed the $32,000 question). He documented his year-long journey through the Encyclopedia in a bestselling book titled The Know-It-All. In his second book, The Year of Living Biblically, he dedicates a year to attempting to follow every rule and law in the Bible. Like its predecessor, this book has sold very well, quickly making its way onto the lists of bestsellers.

Jacobs is Jewish by birth but grew up in a family that did not practice the faith, or not seriously at any rate. After the birth of his son, though, Jacobs began to wonder if teaching his son about religion would scar him or make him a better person. He set out on this quest to determine how religion could impact a life. To that end he decided to study the Bible and seek to understand its every rule. For the first eight months he focused exclusively on the Old Testament, looking through the Bible to find even the most obscure laws. He implemented as many of them as he could. And in the last four months of the year he turned to the New Testament. He simply overs a chronological records of his year, providing a journal entry every two or three days.

While the book claims that Jacobs lived “biblically,” the reader will soon note that he often relied in large part on Jewish extra-biblical interpretation of the Old Testament laws. Hence his practice of many of these rules was based not on a plain reading of the Bible but on age-old interpretations, many of which are almost unbelievably obscure and strangely mystical. We’ll have to use the word “biblically” quite loosely.

Jacobs is at his best in this book when seeking the heart of the biblical commandments, when rather than just blindly following the commands he is seeking the reason God gave them and attempting to obey not the letter but the spirit. He is at his worst when he is being deliberately Pharisaical, seeking to adhere to the letter rather than the spirit. Hence he finds himself in a park tossing tiny pebbles at adulterers so he can fulfill the law to stone those who commit adultery. Or maybe he is at his worst when he is searching out the most radically liberal Christians to teach him not what the Bible teaches but what he wants to hear. Thus he attends a Bible study for homosexuals where he is taught that the Bible does not forbid homosexuality but merely homosexual rape. This appeals to him as a self-professed liberal but veers far from the broad stream of Christian interpretation. There are several occasions where he essentially admits that he is finding interpretations that appeal to him even if they are not strictly accurate.

In the end of it all, Jacobs seems to be little better off than when he began. He remains agnostic but somehow feels he can and should pray (to whom? to what end?). He has discovered some cultural Jewish roots but does not seem to have found any true faith. He has discovered the value of the sacred, but continues to forsake God.

The Year of Living Biblically has many poignant moments and many that are quite funny. There are even a few laugh out loud moments. But there are plenty of others that are no doubt supposed to be funny but which fall strangely flat. This is bound to happen in a book that stretches to almost 350 pages, perhaps a hundred more than it ought to have been. Yet it is by no means all bad. It was quite an enjoyable read, even if it did drag near the end. Still, as much as he seems to attempt to make this a book the reader will take seriously, Jacobs cannot escape it seeming more like a gimmick. This experiment is really a strange form of exhibitionism where he invites the readers into his life as he deliberately makes a fool of himself. It is more entertainment than of any serious value. It is for good reason, I suppose, that you will find the book filed under the heading of “Humor.” It is a year of living loosely biblical and a year of gathering information that will lead to a bestselling book. The reader will have to decide which of those motives was foremost in the author’s mind. Personally, I suspect the latter.