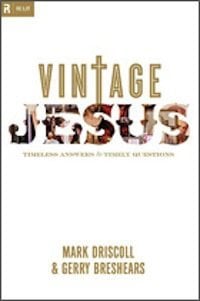 Vintage Jesus is the first book published under the banner of Resurgence Literature (Re:Lit) which is a ministry of Resurgence (which is, in turn supported by Mars Hill Church). This is also the first title in a series called “Vintage Jesus” that will build on the themes and doctrines introduced in this book. It is one of six(!) new books we’ll see this year from the pen of Mark Driscoll. The book is a collaborative project between friends—Mark Driscoll and Gary Breshears. Describing how this collaboration unfolded, Driscoll writes, “In the chapters of this book you will hear my voice since I crafted the words onto pages, but many of the concepts were shaped and formed by my good friend. I sent the manuscript to him for his insights and suggestions, and he also wrote the answers to common questions found at the end of each chapter.” Their hope is that “this book will be readable, practical, and biblical so that everyone from seminary professors and pastors to non-Christians would benefit from our work.”

Those expecting another Radical Reformission or Confessions of a Reformission Rev will not find it here. This book, though still written by Mark Driscoll and still laced with the humor and unique writing style we’ve come to expect from him, is in a whole different category. The bulk of the book is simply straightforward, biblical teaching about the person and work of Jesus Christ. It also engages in some light apologetics, defending Jesus against the countless caricatures of Him that have arisen through the history of the church. The book offers “timeless answers to timely questions” and in that way is meant to speak to some of the strange and unorthodox teaching that we see in the church and outside it today. As Bruce Ware says in his endorsement, “Vintage Jesus offers a fresh, engaging, and insightful discussion of some of the oldest and most crucial truths about Jesus Christ that constitute the very core of the gospel itself.”

As Driscoll covers this ground, you’ll find some things that are funny, some that are profound, and some that are, in my opinion, in poor taste. I will provide a few brief examples of each.

There are some portions of the book that have the Driscoll flair that so many people have come to love. Some may just leave you laughing out loud.

Like many who will read this book, I appreciate how Driscoll is able to communicate real truth in a way that is accessible and funny. He is able to poke fun at the way people think about Jesus and do so in a way that makes those beliefs seem so utterly ridiculous. He has his finger on the pulse of this culture and is able to speak to it.

But sometimes this humor gets a little out of hand. There are some portions of the book that I felt went beyond good humor and crossed the line into what is inappropriate. This is a common critique of what Driscoll says and writes and, I suppose, some were hoping that his transition from publishing with Zondervan to publishing with Crossway would signal the end of such statements. Somehow, while these statements may not seem so out of place in a Zondervan book, I had hoped for better from Crossway. I can’t help but feel that certain words and phrases must mark a kind of low point for Crossway. Perhaps the editorial staff weeded out more and worse. But I think you’d be hard pressed to find any other Crossway title with this kind of language. I hope it is the last.

For example, when looking at the humanity of Jesus, Driscoll chooses to say that Jesus told the Pharisees “that their moms had shagged the Devil.” Though what the Lord said may have such connotations, that particular phrase seems out-of-place and unnecessary. It’s flippant and it makes light of serious subject matter. Similarly, a heading in the chapter entitled “Why did Jesus’ Mom Need to Be a Virgin” reads, “Scripture does not teach that Mary knocked boots with God.” While it is true that the Bible does not indicate that there was some kind of sexual relationship between Mary and God, using this particular term seems beyond good taste. The same phrase (and a passing supposedly-humorous reference to incest) appears on the book’s first page:

It is interesting to compare how D.A. Carson handled the Pharisee’s talk in his commentary on the book of John. He writes, “It is not at all impossible that the Jews are alluding to the irregularities connected with Jesus’ birth. From their perspective, he displays considerable cheek to talk about paternity: they were not born of fornication (wink, wink). If this is a correct reading, then it is a further instance of Johannine irony…” The point is the same, but Carson preserves a kind of dignity absent in Driscoll’s description. This is not just anyone we are talking about here, but our Lord and Savior—the Son of God. Surely we ought to treat His conception and birth with more respect and dignity than this.

What bothers me is not just the use of these phrases, but the utter non-necessity of doing so. They are designed to illicit laughs and perhaps show people how edgy Driscoll is. But they are, in my estimation, completely unnecessary, especially since Driscoll is perfectly capable of being humorous without being dirty. The book would not suffer at all without them. It is easy to gain laughs through such words and phrases, but just because we are able do so, I don’t think we necessarily should. Thankfully such examples are rare (though one could argue that their rarity proves how unnecessary they are). There is so much more to Driscoll than his sense of humor and his edginess. I hope that sooner or later he becomes known for what he does that pleases God rather than what he does that shocks the masses. In some cases I’m convinced they are not the same thing.

Of course there are also many portions of the book that gave me a lot to think about and showed some very good depth of insight. Here are just a few examples:

Statements like these, combined with the book’s biblical foundation and the addition of several poignant descriptions of moments from Driscoll’s ministry, make it a valuable read. Those who read it are likely to learn from each of the chapters. The teaching is powerful, biblical and weighty. This is solid food.

But would I recommend you read it? That is a tough question for me to answer. And no matter what I say, someone is going to disagree with me (and quite strenuously too, no doubt). To be honest, there are some people to whom I’d definitely hesitate to recommend it. I would certainly not be happy if Driscoll, standing face-to-face with my wife or my children, used some of the words and phrases in this book. Why then would I hand them the book and recommend that they read it? There is certainly much to gain from Vintage Jesus and I’m sure that many will read it and will benefit. But I’m sorry that Driscoll had to cross the line of good taste, even if only occasionally. It does not invalidate the book, but neither does it make it any better. It was so utterly unnecessary.