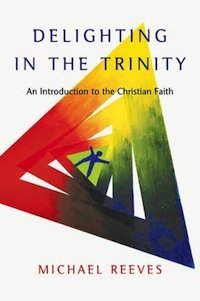 Buy from Amazon Buy from WTS Bookstore
It’s a feeling every reader knows and loves, and perhaps especially the reader of theology. It is the feeling that comes as you read a book and find yourself thinking “This could change everything.” There are some books that go straight to what you think you know, what you are so sure of, what you’ve so carefully constructed, and begin to pull it all apart and to replace it with something that is so much better, so much loftier, so much more worthy of God. Michael Reeves’ Delighting in the Trinity has been one of those books to me. After ten pages I was hooked, after twenty I was reeling and after fifty I knew I would have to go back and read it all again.

I have read several books on the Trinity in the past and have always enjoyed reading them. James White’s The Forgotten Trinity and Bruce Ware’s Father, Son, and Holy Spirit are biblical, systematic and powerful. I’ve read them, benefited from them, and often recommended them. I will continue to do so. The unique angle—and unique beauty—of Delighting in the Trinity is that it looks less at a concept and more at a relationship, less at a doctrine and more at the persons of the godhead. It is, at heart, an introduction to the Christian faith and the Christian life that seeks to show that both must be at all times rooted in the triunity of God. All that God is, all that God does, flows out of his triunity. It is the essential Christian doctrine. Reeves says that his book is

about growing in our enjoyment of God and seeing how God’s triune being makes all his ways beautiful. It is a chance to taste and see that the Lord is good, to have your heart won and yourself refreshed. For it is only when you grasp what it means for God to be a Trinity that you really sense the beauty, the overflowing kindness, the heart-grabbing loveliness of God. If the Trinity were something we could shave off God, we would not be relieving him of some irksome weight; we would be shearing him of precisely what is so delightful about him. For God is triune, and it is as triune that he is so good and desirable.

Like me, you have looked at the diagrams that attempt to display the Trinity and you’ve heard the various comparisons: It’s like the three states of water: liquid, steam and ice; it’s like an egg that has shell, white and yolk and yet is only one egg. But if we aren’t careful, our explanations can make the Trinity seem distant and difficult rather than imminent and delightful. “For all that we may give an orthodox nod of the head to belief in the Trinity, it simply seems too arcane to make any practical difference to our lives.” While we have a theological construct of the Trinity in our hearts and minds and statements of faith, it can make so little difference to our lives that God is a Trinity rather than one (or two, for that). What Reeves seeks to do, and what he does so well, is to introduce the Trinity not as a problem or a technicality, but as “the vital oxygen of Christian life and joy.”

And so he looks at Father, Son and Spirit, he looks at Creation, at salvation, at the Christian life, placing the triunity of God at the very center of it all. Consider this, the triune nature of the cross:

This God makes no third party suffer to achieve atonement. The one who dies is the Lamb of God, the Son. And it means that nobody but God contributes to the work of salvation: the Father, Son and Spirit accomplish it all. Now if God were not triune, if there was no Son, no lamb of God to die in our place, then we would have to atone for our sin ourselves. We would have to provide, for God could not. But—hallelujah!—God has a Son, and in his infinite kindness he dies, paying the wages of sin, for us. It is because God is triune that the cross is such good news.

He says a page later, “The more trinitarian the salvation, the sweeter it is.”

Here’s the rub: If you are to delight in God, you must delight in the God who is, which is to say, the triune God. And if you gaze at this God, you will be filled with delight. And this is exactly what this book does—it draws the heart and mind to the Trinity, the source of all delight.

And so, this book is about delighting in the Trinity not as a theological construct, but as the very essence, the very joy, of the Christian faith. The Trinity is not merely a doctrine that separates Christianity from the other religions of the world, but a doctrine that describes the reality of the God who is. While Reeves deals with one of the most unfathomable of all doctrines—one we can understand only to a limited degree—the book never becomes dense; what’s more, Reeves infuses the book with a droll, cheeky sense of humor. It’s a perfect tone.

I am hard pressed to think of a book I’ve highlighted so heavily, a book that has impacted me so immediately, and a book which I am so eager to read again so quickly. I give this one my absolute highest recommendation.