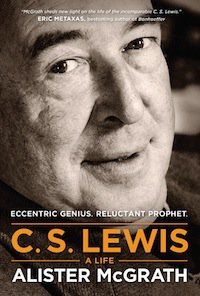 Buy from Amazon
Without a doubt, C.S. Lewis is one of the most interesting, perplexing and polarizing figures in recent Christian history. For some he is a giant of the faith who asked questions few were willing to ask and who answered those questions in compelling ways. For others he is no Christian at all, a fake, a fraud, who revoked his faith at the end of his life. Few men are seen in such contradictory ways. What is undeniable is that Lewis remains a hero to many Christians and that his influence continues to grow even fifty years after his death.

Lewis has been the subject of several full-length biographies but I would suggest none is as fine as Alister McGrath’s new C. S. Lewis – A Life: Eccentric Genius, Reluctant Prophet. Where most of Lewis’ previous biographers were former friends and acquaintances, McGrath never knew C.S. Lewis. He may not write as beautifully as George Sayer (Jack) and he may not be able to offer the warm, personal insights that come from enjoying a personal relationship with his subject, but he has the advantage of a critical distance that was lacking in some of those previous accounts.

The book’s subtitle aptly captures his portrait of C.S. Lewis: an eccentric genius who was also reluctantly prophetic to his generation and to our own. Lewis’ eccentricities were many. McGrath looks deeply into the strange relationship with the mysterious Mrs. Moore, finally saying what biographers have been reluctant to admit: that for many years Lewis was living in a common-law relationship with the mother of one of his dear friends. He looks as well at Lewis’ unexpected marriage to Joy Davidman and tries to discern whether this was a marriage of convenience, whether it was a gold-digging woman taking advantage of a naive man, or whether there really was a spark between the two. He examines Lewis as a friend, a brother, a professor and an unexpected celebrity.

It is in his written works that C.S. Lewis’ eccentricities intersect with his prophetic role. Here McGrath shows Lewis’ reluctance to become a Christian and his slow spiritual surrender to the intellectual awakening to the person and work of Jesus Christ. He grapples with what Lewis really believed about Christ’s atoning work, setting it in the context of his immersion in medieval literature. He looks at Lewis’ later writing, especially A Grief Observed, and answers those who believe this marks Lewis’ descent into agnosticism. He suggests why Lewis continues to be so widely read and admired in our day. Still, I found myself wishing that McGrath would dive just a little bit deeper into what Lewis believed and attempt to reconcile some of those theological conundrums associated with his name and his books. It may be that he will do this in a second, forthcoming work that promises to be more extensive and academic. Or it may be that Lewis is a riddle that cannot be solved.

With all due respect to previous biographers, this work shows how important it is to allow time to elapse between the death of a subject and an account of his life. Both types of biography have their place, but those written very soon after a subject’s death will necessarily be limited. The earlier biographers knew nothing of how Lewis’ fame would continue to increase after his death, even leading to the series of feature films set in the world of Narnia. Biographers have written about Lewis’ declining relationship with J.R.R. Tolkien, but one critical fact became available only in 2012: Even long after their friendship began to decline, Lewis nominated J.R.R. Tolkien for the Nobel Prize in literature, showing his enduring respect. Such facts come to light only slowly and at their own convenience.

Whether you admire the man or despise him, whether you regard him as children’s author or a Christian scholar, C.S. Lewis’ importance to contemporary Christianity is undeniable. He is a fascinating figure and one who is impossible to reconcile to our tidy and convenient categories. McGrath’s account of his life does him justice, capturing him in his eccentricities, in his brilliance, in his strengths, and in all his perplexities.