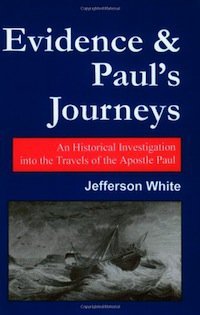 Buy from Amazon
The Bible teaches that it is not historical or archaeological evidence lies at the heart of Christianity, but a childlike faith. Neither is it signs, wonders or miracles. The Scripture tells us that “An evil and adulterous generation seeks for a sign.” A generation that serves the Lord will be content with a faith that God is who He says He is and that He has done what He says He has done. Nevertheless, because Scripture claims it is true, we should believe it to be so and should expect that we would find it to be so. “Faith in Jesus rests upon the truth of the events narrated in the New Testament. Faith in Christ is inseparable from the belief that certain events occurred and that the record of those events is true. The life of Jesus is more than just a spiritual event, it is an event in history. Thus Christians are faced with the problem of evidence.”

In Evidence & Paul’s Journeys, Jefferson White, an independent scholar, tackles this problem head-on, providing an historical investigation into the travels of the Apostle Paul. Structuring the book around Paul’s missionary journeys, he seeks evidence that the people, places and events recounted in Scripture are genuine and historically accurate. “Most books written for the general reader tend to be superficial in their examination of that evidence. Even the best of such studies barely scratch the surface. In part, this is due to an assumption that the evidence is too technical, or too involved, for the average reader to follow. In part it is due to a bias that regards scholarly specialists as being the only people who can properly understand and weigh the evidence. Neither of these propositions is true.”

This book is founded upon two rational assumptions. First, the biblical record is assumed to be true unless it can be shown to be false. Second, if a contradiction is alleged to exist between the biblical record and other historical evidence and there is a reasonable explanation to account for it, the contradiction is not proved. In other words, we can assume that the authors of Scripture were honest, well-intentioned men who, at the very least, believed that they were accurately recording historical events.

On this basis, White launches his investigation into Paul’s journeys. The evidence he presents is compelling, and for one who affirms the inerrancy of Scripture, hardly surprising. He finds that time and again, the record of Scripture can be reconciled with the evidence that has been left behind. While he covers a vast amount of territory, among the pieces of evidence that I found most interesting were those dealing with the sea voyages recounted in the book of Acts. White’s research led him to conclude that, contrary to many skeptics, the information provided by Luke is accurate, both in terms of the route the ships must have taken and in the time the voyages would have taken to complete. In fact, Luke’s scant knowledge of maritime travel makes his descriptions doubly interesting, for he provides a perspective that is naive and unlikely to be exaggerated or fictionalized.

In the end, the reader, as White did, will have to conclude that Scripture is accurate. While the purpose of the Bible is not to communicate history, but rather to communicate the story of God’s purposes in redeeming a people unto Himself, it cannot help but provide history through the larger story. And when it does so, Scripture records it accurately, both providing a fascinating glimpse into life in the first century and testifying to its own inerrancy.