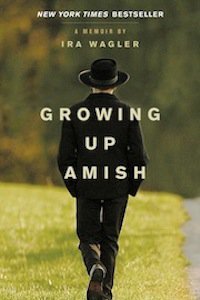 Buy from Amazon
Evangelicalism has a strange obsession with the Amish. The Amish are the theme of countless novels and they also appear in cookbooks, books of moralisms, books on the virtues of the simple life, and on and on. They are held up as models of cultural and theological simplicity, people who can point us to better days. The problem, of course, at least as it pertains to theology, is that this is simply not a true representation.

Ira Wagler grew up Amish, spending his childhood in both Canadian and American communities. He recently released a memoir that has made its way onto the bestseller lists. Growing Up Amish (a title that pretty much says it all) records his memories from childhood all the way to his mid-twenties when he eventually broke free of his family and community.

Wagler is truly a gifted writer which makes this memoir beautifully crafted and wonderfully poignant. He draws the reader into his world as he grapples with his identity, as he leaves the community and returns, leaves and returns again, and as he tries to understand who or what he can be if he forsakes his Amish identity. His experience of truly being converted is the turning point of his life–perhaps an unexpected climax for a man raised in such a moral and religious atmosphere.

Here is a particularly poignant scene where Ira’s youngest brother walks away from his family and his Amish tradition once and for all:

Finally Nathan emerged from his bedroom and walked up to Dad, who was sitting in the living room. “I’m leaving,” he said shortly, abruptly. Dad looked up at him, uncomprehending. Then it slowly dawned on him what Nathan had just told him. “What? No, you should not do that,” he said, his face darkening into a serious frown. Nathan just grunted and walked out, duffel bag in hand, and shut the door behind him. Dad rose from his chair and followed him to the door. He stood there, looking out, unsure of what to say or what to do. And then Nathan approached Mom, working outside the washhouse. From a distance, I watched. I could not hear the words he spoke to her. Her face, at first turned up to him in a smile, suddenly collapsed in sorrow and fear. No, no. She mouthed the words. Spoke them. I drifted nearer. Then Nathan turned and walked away from her. Down the gravel drive, the long half mile to the road. He had gone only a hundred feet or so when she began to call his name, beside herself with horror. Fear. And love.

Even now, many years later, Wagler seems occasionally trapped between revulsion and admiration as he reflects on all the years he lived among the Amish.

As I read this book, there were two observations that stood out above the rest.

The first observation is the extreme, and I really do mean extreme, legalism of the Amish brand of Christianity. As much as we regard the Amish as a group of people who are committed to simplicity, their faith involves an endlessly complex network of laws that, if broken, result in censure or separation from the community. These laws vary widely from community to community, each of which is ruled by a handful of elders or bishops. Here is one of the strange examples of legalism within the community–the mustache: “Not that this issue hasn’t been a cause of much dispute and dissension over the years. Always, it seems, some wild-eyed heretic somewhere is spouting Scripture and publishing bombastic little pamphlets arguing in favor of the mustache. Such arguments, however logical, have always been rejected by the powers that be, with the mighty hand of the church forcing the heretic to either repent or be expelled.”

And he means it. That really would be the consequence for maintaining unorthodox views on the mustache. Part of the reason for such legalism may lie in the way ministers are selected. This involves a strange combination of casting lots and voting; the system makes all men equally valid for the ministry and essentially allows chance to choose the men who are eventually ordained, leaving many men chosen as ministers who have absolutely no desire and no gifting. Wagler recounts one particularly painful instance of a man being utterly crestfallen when the lot fell on him; a man who wanted nothing less, ended up being chosen, leading to a lifetime of rather futile ministry.

I suppose what I learned through this is that legalism is often caused by fear. It is fear of freedom–the kind of freedom the gospel brings us–that keeps people bound by rules. It somehow seems easier to legislate every area of life than to allow people to make their own decisions.

The second observation is the power of the community to keep people from separating from it. With a combination of awful theology (“You will go to hell if you leave the Amish”) and almost unbearable social pressure (“You will be shunned by your family if you leave”) few people muster up the courage to leave for long. So many who do try to leave, are quickly drawn back because they cannot stand the cost. They are quickly welcomed back into community, after performing a few legalistic requirements, even if they show little fruit of repentance. What seems clear is that drawing a person back into the community owes more to a desire to keep people from leaving the community than a desire to ensure that they are truly penitent. In the end, outside appearances are the most important thing. Wagler still grapples with the strange draw of the community and the apparent benefit it brings about.

And therein lies the paradox that would haunt me for almost ten years: the tug-of-war between two worlds. A world of freedom versus a world of stability and family. A world of dreams versus a world of tradition. And wherever I resided at any given moment, trudging through the tough slog of daily life, the world I had left called me back from the one I inhabited. It was a brutal thing in so many ways, and I seemed helpless to combat it. Torn emotionally, moving back and forth, always following the siren’s call to lush and distant fields of peace that seemed so real but, like shimmering mirages in the desert, always faded away when I approached them.

Growing Up Amish is one of several books that have been published in recent years that seeks to bring well-timed correction to what it means to be Amish and to undo many of the romantic misconceptions. Wagler’s memoir is genuinely a joy to read, not only because it takes place in the middle of a foreign and fascinating culture, but also because of his growing hopelessness and, following that, his awakened understanding of grace.