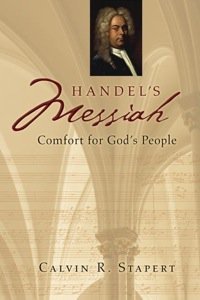 Buy from Amazon Buy from WTS Bookstore
I always feel like a bit of a poser when I say this, but I absolutely love Handel’s Messiah. Though I appreciate small amounts of classical music (to use the term in a broad sense) I am largely a rock ‘n’ roll type. Yet there is something about Messiah that grips me. I find myself listening to it throughout the year, again and again, year after year. I’ve listened to recordings hundreds of times and make it a habit to attend a live performance every Christmas season. I can’t get enough.

I was rather excited to see a new book releasing this fall titled Handel’s Messiah: Comfort for God’s People. Written by Calvin Stapert, professor emeritus of music at Calvin College, the book serves as a guide to Handel’s great masterpiece. As the publisher says in the one-sentence pitch, “If you want to enjoy and appreciate Handel’s beloved Messiah more deeply, this informed yet accessible guide is the book to read.” I’m inclined to agree.

While I love Messiah I have often struggled with the knowledge that I do not really understand it very well. I’ve always known that if I just knew a little bit more about this form of music, if I just understood the context a little bit more, the Baroque style, my appreciation of Messiah would necessarily grow as well. But I am not at all musical. The last time I played an instrument was in primary school and that instrument was a recorder. Any time I’ve sought to learn more, I’ve quickly gotten lost in the technicalities of the musical lexicon.

However, this book has finally helped me see Messiah more clearly. Here is how the author describes what he has sought to accomplish in his work. “The three sections of this book aim to increase understanding from three different perspectives. The first section traces three histories–the history of oratorio up to Messiah; the history of Handel up to Messiah; and the history of Messiah’s inception and reception. Although I think these histories can contribute something toward a greater understanding of the work, I tell them primarily because they reveal a series and confluence of remarkable and unlikely events that led to the making of Messiah and from there to the phenomenon that it has become.”

The second section of the book deals with what Charles Jennens hoped to accomplish in compiling the libretto of Messiah and what purposes Handel had for setting it to music. Here Stapert shows that Messiah acknowledges two masters–the theater and the church, which is to say that it was meant to be entertainment and it was meant to be sacred.

The third section looks to Jennen’s text and the music Handel composed to accompany it. Essentially it provides commentary on the music and the theology of the words. As he does this he largely avoids using technical language that will be meaningful only to those with a background in music or theology. In other words, he seeks to make this an accessible book that will appeal to any reader, whether one well-versed in such music or one who is entirely new to it.

The book weighs in at just under 180 pages. Just about half of the book contains the third part, which means there are about 75 pages of commentary on the music and the words. This is ideal to read through before attending a performance or to read through as you listen to a recording.

Particularly interesting to me was the author’s discussion about the purpose behind Messiah. Debates have raged (in rather closed circles, mind you) about whether Messiah was meant to instruct or whether it was meant to entertain. Stapert looks to the times to show that both were true; they were not mutually-exclusive. “However the relationship was viewed, teaching and delighting were not seen as incompatible, and neither one was seen as detrimental or inimical to art. They belonged together.” Though modern sensibilities may have swayed people to think that moral teaching weakens art, Stapert disagrees. “From the perspective of history, however, the view that art is amoral is the peculiar one. The normal view, taken by most people in most times and places, sees art as being closely related to ethics and morality.”

Centuries after it was composed, Messiah continues to delight. It beautifully combines the words of Scripture–words to teach and inspire–with music that causes the heart to delight in the One who gave us the gift of music. After all these years it continues to offer comfort, joy and peace to God’s people.