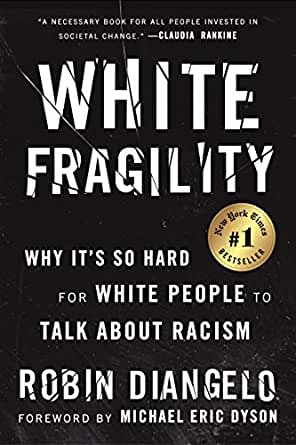 For the past couple of weeks I have been laboring to write the third and final part of my review of Robin DiAngelo’s White Fragility. The first two parts took an unusually long time to prepare, but in the end I was pleased with the results. In the first article my goal was to summarize the contents of the book as a kind of narrative that explains what the world should be like, tells what the world is actually like, prescribes actions we ought to take to improve the world, and describes the future we can imagine when we’ve done so. In the second article I tried to summarize what the Bible says about race and racism by following much the same structure. And then I began to write part three, which was meant to bring the other two together. I wrote a draft and scrapped it. I wrote another draft and scrapped it again. And again. And again. My drafts folder is full of attempts, none of which I’m happy with.

I am not sure why I’ve struggled so much. I’ve reviewed hundreds of books over the years and have rarely had difficulty in summarizing them and explaining their strengths and weaknesses. If I had to guess, I’d say this one is particularly difficult because it draws so deeply from different ideological, political, and philosophical streams, many of which are only somewhat familiar to me. And then maybe I was also too ambitious in my goals. But whatever the reason, the more I wrote, the less comfortable I became with what I had written. So I’ve decided the only way forward is to simplify. The big question I have wanted to address is this: Is White Fragility a helpful resource for Christians? To that question I give a resounding no. This is a bad book and one that is unlikely to serve Christians as we consider issues related to race, racism, and racial reconciliation. In what follows I will simply provide a few reasons I’m convinced it’s an unhelpful and unbiblical book.

It is built upon the rotten foundation of identity politics. It is becoming increasingly clear that identity politics is establishing itself as nothing less than a competing religion, and one that is very good at dividing but very poor at uniting. That alone should be of significant concern to Christians who want to consider DiAngelo’s case, since she is explicit and unapologetic that her book is built upon that very foundation. Jonathan Leeman has offered a helpful critique of identity politics and its religious structure by focusing on three concerns, all of which I share and all of which are on clear display in White Fragility. “1) Its doctrine of creation: It treats both group and the individual as god. Therefore, there is little basis for human unity or dignity. 2) Its doctrine of sin and the fall: It offers a different list of sins than the Bible’s, which creates new injustices. It also overlooks the universality of sin. 3) Its doctrine of redemption: It offers salvation by merit, which yields self-righteousness. And it insists on political agreement, which yields division.” In this way the book is problematic on the most foundational level and unlikely to help Christians pursue unity.

It redefines racism. We have long understood racism along these lines: “prejudice, discrimination, or antagonism directed against a person or people on the basis of their membership of a particular racial or ethnic group.” Christians have generally understood it as the sin of partiality that’s joined with others like hatred, arrogance, or greed, all of which lead to sinful prejudice, discrimination, or antagonism. But in White Fragility DiAngelo radically redefines the term in such a way that a person who has never had a prejudiced thought or taken a discriminatory action is still guilty of racism simply because of his or her identity group. White people are racist because they are white. According to DiAngelo, racism is “a complex, interconnected system” into which all white people are socialized to such a degree that “racism is unavoidable and … it is impossible to completely escape having developed problematic racial assumptions and behaviors.” She alters the definition of a key word so she can apply it to an entire group of people. According to her definition all white people bear the blame and responsibility of being racists simply by virtue of their skin color. They are guilty for a sin they may never have committed (or may have committed but repented of). I hardly need to explain why this is unfair, unjust, and contrary to the Bible’s understanding of sin.

It prescribes the unhelpful solution of antiracism. DiAngelo makes it clear that it is not enough for white people to be not racist. The fact that you may never have had a prejudiced thought against people of color and have never acted in a discriminatory way is neither here nor there. Rather, like many contemporary commentators, she advocates for antiracism, which is admitting that racism is located more in systems and structures than in people and then laboring to dismantle and replace those unjust systems with superior ones. It is a term that demands specific attitudes and courses of action, and is marked by constant antiracism training and diversity seminars that are meant to lead to an elevated racial consciousness. Kat Rosenfield points out that “as antiracist reading lists proliferate and book sales surge, the primary benefit is not to the marginalized communities who suffer most from oppression, but to the finances of the privileged class of professional diversity educators whose guidance is required, forever, to help you do the work. This may partly explain the dearth of solutions in books like White Fragility; after all, an anti-racist training program that actually made people not racist would ultimately render the author, and her entire industry, irrelevant.” Just as DiAngelo defines the problem, she also defines the solution; just as she will not allow anyone to deny the problem, she will not allow anyone to suggest alternate solutions.

It minimizes the voices of people of color. One of the most astounding aspects of White Fragility is the way DiAngelo so boldly speaks on behalf of people of color. As John McWhorter points out, she constantly talks down to black people in the name of antiracism. “In 2020—as opposed to 1920—I neither need nor want anyone to muse on how whiteness privileges them over me. Nor do I need wider society to undergo teachings in how to be exquisitely sensitive about my feelings. I see no connection between DiAngelo’s brand of reeducation and vigorous, constructive activism in the real world on issues of import to the Black community. And I cannot imagine that any Black readers could willingly submit themselves to DiAngelo’s ideas while considering themselves adults of ordinary self-regard and strength. Few books about race have more openly infantilized Black people than this supposedly authoritative tome.” If we are concerned about issues related to race and racism, we would do well to hear of the experiences of people of color and to listen attentively to their concerns. Surely the path to peace and reconciliation lies along the way of listening. But that would mean listening to people of color, not to a white person who is convinced it’s best that she speak on their behalf.

It is ultimately hopeless. DiAngelo’s book ends with a vision for a better world, but it’s actually not much of an improvement. The world she would lead us into would still be defined by race, still be broken by white supremacy, still be scarred by whiteness, still see the deepest divisions between black and white. The only hope she offers is raising the consciousness of white people, but even then she makes it clear that we do not have what it takes to fully eradicate our racism or to adequately atone for it. The solution must come from within ourselves, but we are too selfish to loosen our grip on the structures and institutions that keep us in power. We are the only hope for change, but we will not change. In the end, White Fragility offers no hope and no vision for a world in which whites and people of color experience equality and true unity. The world DiAngelo wants to lead us into is a world that is, at best, only moderately less bleak than the world she describes in the opening pages.

For these reasons, among others, I cannot recommend White Fragility as a useful resource for Christians who wish to think well—which is to say, to think biblically—about issues of race, racism, and racial reconciliation. In fact, it’s hard to imagine a book that would be less helpful or more destructive. It is built upon a rotten foundation, it unfairly redefines terms, it sets a trap, it prescribes and demands unhelpful actions, it minimizes much more helpful voices, and it is ultimately without hope. Those who want to see the end of racism and to experience true reconciliation will find themselves farther from it, not closer to it, if they read and heed DiAngelo.