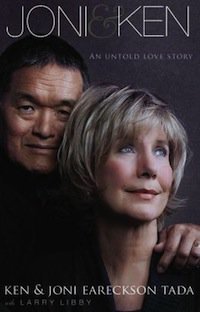 Buy from Amazon
Many years ago my grandmother succumbed to cancer and went to be with Jesus. Among the things she left behind, buried among other personal effects, was a long, handwritten letter from Joni Eareckson Tada. My grandmother had experienced excruciating pain in her life, losing both a daughter and her husband to suicide. As a new Christian she had written to Joni to share her grief, believing that perhaps in Joni there would be someone who might understand and who might give her hope. And she did. In this letter she mourned with one who was mourning and shared hope grounded in the gospel.

Joni is one of those entirely unique Christian personalities and one who is universally loved and admired. Her ministry has continued for decades, and through conferences and radio and music and books and every other media she has been sharing encouragement and hope. I have seen Joni speak a few times and off to the side I’ve always spotted her husband, Ken. So much has been said about her, but so little about him. He is content to love and serve his wife and to allow her to be center-stage. But I’ve wondered who he is and what his role has been in Joni’s life and ministry. Their story is finally being told in Joni & Ken: An Untold Love Story.

This is an honest book that tells the story of what has not always been an easy marriage. Though Ken married Joni after her accident and after she had become a renowned Christian personality, neither of them was prepared for all the challenges that marriage would bring. What started as a great love story soon began to lose some of its lustre. While the love remained, the romance and respect faded. But the Lord was not done with them and sparked a great renewal of love and romance. Their story is not one of unfading, unattainable marital bliss, but one that is so very real, and one that went through difficult valleys. Though it is unique in many of its particulars, in other ways it looks like so many other marriages.

As I read about Joni and Ken I found myself growing in my love for Aileen. Isn’t it funny that reading about another couple’s marriage can do this? Yet their love for one another is contagious, the way they pray and laugh and sing together is admirable, and the way Ken has sacrificed so much for Joni is Ephesians 5:25 in action. I learned about love and sacrifice and deep intimacy from this portrait of their marriage.

While I enjoyed the book, there was at least one element that surprised me. Joni and Ken met at John MacArthur’s Grace Community Church and, to my knowledge, have been members there through their entire marriage [Update: according to this article, they are, or at that time were, members of a local PCA church]. His influence in their lives has been profound. In Joni & Ken we are told that another great influence on Ken’s life has been John Eldredge and his book Wild at Heart. This leads to some strange encounters with Ken finding his real name (Eldredge teaches that a man may be given a name by his father and more names by other people, but only God can give him his real name), hearing God’s voice speaking to him in the wilderness, and other elements of Eldredge’s philosophy/theology of manliness. What Eldredge teaches is in so many ways completely at odds with what MacArthur teaches, but this contradiction is never resolved.

Certain other elements were frustrating. For example, the book asked several questions that it did not answer, perhaps because some of those things would have been too probing or too exposing. Still, why introduce questions that will go unanswered? Additionally, the book’s timeline is at times very difficult to follow, jumping often between past and present.

Joni & Ken truly does tell an untold love story and one that merits being told. The Tadas have had a great and enduring ministry; they are a great gift to the church, and for that reason the book is well worth reading. It allows us to see into their marriage, to learn from their highs and lows, and to praise God for allowing them to work together to his glory. But all the while it feels like a book that is not quite as excellent as the story, and the marriage, deserves.