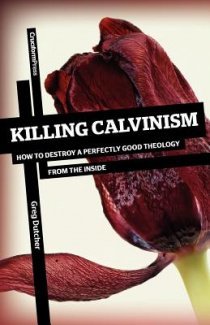 Buy from Amazon Buy from WTS Bookstore
I am often asked to comment on Calvinistic theology and its impact on my life. I was raised in the Reformed tradition and continue to hold fast to the tenets of Calvinism, but always try to distinguish between Calvinism as a kind of theological shorthand, a means of summarizing a lot of theology under a single word, and Calvinism as a banner to rally around. I advocate the former and shy away from the latter.

Greg Dutcher is a Calvinist pastor who is concerned about some of what he sees in today’s New Calvinism. Calvinism is “in” today; this is a cause for joy for those who, like me, believe that Reformed theology is a pure and accurate expression of New Testament theology, but with Calvinism’s trendiness come certain dangers and challenges. Some time back Dutcher approached me to ask if Cruciform Press would be interested in publishing a book that would look at a series of ways that we, today’s Calvinists, might destroy what the Lord appears to be doing. His proposal was intriguing and I passed it to the decision-makers. Cruciform went on to publish Killing Calvinism: How to Destroy a Perfectly Good Theology from the Inside. Though I looked at the initial proposal I deliberately chose not to read it until several months after publication. In fact, I only read it in full yesterday. (A long-delayed flight gave me a lot of time.)

I am glad I waited and even more glad that I finally read it. Killing Calvinism is part confession, part teaching, part exhortation. Dutcher looks first to himself and his own propensity to be a Calvinist first and a Christian second, to be more concerned with a theological system than with the gospel itself. He offers eight different ways that we may just destroy what the Lord is doing.

While it’s unlikely that each of these eight things apply to each one of us, I’m sure we can all see our propensity toward at least a few of them. I know that I sometimes value understanding and systematizing theology over being a disciple of Christ and I know I can sometimes try to tidy up the Bible’s loose ends by downplaying the difficulties presented by certain texts. I know that I can also do just what Dutcher says here: “Some Calvinists seem to think we were saved to proclaim God’s sovereignty rather than God himself.” Guilty as charged. And I could go on.

Among the book’s strengths are its illustrations. For example, Dutcher compares Reformed theology to a windshield of all things. “I am concerned that many Calvinists today do little more than celebrate how wonderfully clear their theological windshield is. But like a windshield, Reformed theology is not an end in itself. It is simply a window to the awe-inspiring universe of God’s truth, filled with glory, beauty, and grace. Do we need something like a metaphorical windshield of clear, biblical truth to look through as we hope to marvel at God’s glory? Absolutely. But we must make sure that we know the difference between staring at a windshield and staring through one.”

Dutcher’s exhortations and rebukes are timely and well-taken. He writes as a concerned Calvinist who wants to see the Lord continue to work in and through his people and he knows that we may prove to be the barrier to that work. John Piper read the book and said “When this kind of critique and warning come from within a movement, it is a sign of health.” I couldn’t agree more. All of us who love Reformed theology would do well to read it and take it to heart.

(Let me again disclose that I am a part-owner of Cruciform Press, the publisher of this book. I have written an honest and voluntary review, but I guess there may be some bias. I haven’t quite figured out how to express enthusiasm for a book I was involved in publishing but truly believe in.)