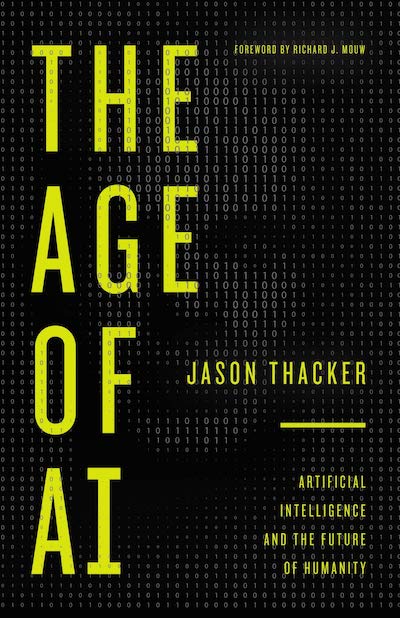 Over the past few years I’ve had many opportunities to speak on the subject of technology—a natural consequence of having written a book called The Next Story: Faith, Friends, Family, and the Digital World. I almost invariably end my speeches with a time of Q&A and one question I can always count on being asked is this: What’s next? I’ve spoken about the rise of digital technologies and the ways they’ve integrated themselves into almost every aspect of our lives, and people are naturally curious to know what the next great technological leap will be. My usual answer is very simple: “AI.”

AI, or Artificial Intelligence, is the subject of Jason Thacker’s new book The Age of AI: Artificial Intelligence and the Future of Humanity. Having read it, I think I can say that it makes a fitting follow-up to my own The Next Story. It would be easy to categorize both books as relevant largely to programmers, scientists, or people otherwise involved in technological fields, but in both cases they are actually written for any and every Christian. They are better categorized as “Christian living.” Where I discussed the dawn of the digital revolution and the fact that we are now constantly surrounded by screens, Thacker takes these devices as his starting point and focuses on what’s behind these technologies. He focuses on the programs, algorithms, and artificial forms of intelligence that are driving them.

When we think of artificial intelligence, the first thing that comes to our minds is probably a humanoid robot that mimics human movement, thought, and speech. And we probably imagine them first serving humanity and then slowly but inevitably overtaking and dominating humanity. But the reality of AI is far more mundane and far more difficult to spot. AI is what provides answers when we speak to Siri and Alexa, what decides the routes we will follow in Waze or Maps, what spits out the answers to our endless Google searches and the ads we will see (and try to ignore) as we browse. Increasingly, it is what makes decisions about what prices we will pay for our Ubers and even about whether or not we qualify for a new credit card. “AI is everywhere, even if you don’t recognize it.” In most of these ways it serves us well, doing what would be far too slow or far too expensive if it had to be done by humans.

But, as with all technology in a sinful world, it comes with both benefits and drawbacks. “For all of its advantages and benefits, AI is also challenging some of the basic principles of life, causing many to wonder about human nature and what really makes us distinct from the rest of creation. AI is doing things like driving cars around our streets and automating countless jobs that were created for humans. AI is changing everything about our world and society. And we aren’t prepared.” Just as all technologies come with benefits and drawbacks, all technologies tend to surge out ahead of us, so we first ask “Can it do this?” while only later asking, “Should it do this?” For a long time we believed AI was a future technology, but then one day we woke up and realized it was today’s technology. And now we are grappling with what it means to the likes of you and me.

Thacker defines AI as “an emerging field of technology defined as nonbiological intelligence, where a machine is programmed to accomplish complex goals by applying knowledge to the task at hand.” He goes on to show that “because it’s nonbiological, AI can be copied and reprogrammed at relatively low cost. In certain forms it is extremely flexible and can be harnessed for great good or for ill.” This theme of great good and great evil is present throughout the book as he attempts to show where AI will help our God-given mission and where it may hinder it. As the book unfolds, he essentially progresses through different aspects of the human experience to show where AI is making its presence known now and will inevitably do so more in the future. He begins with our sense of self, moves to medicine, then to family, work, and war. As he prepares to conclude, he examines how AI is transforming (or eroding) our sense of privacy as it collects and engages with the massive trails of data we leave behind ourselves. A final chapter projects into the future a little to suggest what role AI will have as it continues to mature and dominate. In every chapter, he applies distinctly Christian thought to the subject at hand.

Thacker’s conclusions seem appropriate: “I don’t fear AI or even the moment of singularity. I don’t fear robots, even if one day they do wake up with some level of consciousness. Rather, I fear the people of God buying the lie that we are nothing more than machines and that somehow AI will usher in a utopian age. AI is not a savior.” One of technology’s great tricks is to reinvent us in its image—consider, for example, how we now think of our brains as computers. And one of its great promises is to meet our every need and, in that way, to become a substitute savior. But when we look at it through a Christian lens, as this book does, we see that while AI is another useful tool we can make use of, it is another tool that will fail as well as succeed, and harm as well as help. The Age of AI will help Christians embrace its potential while also being skeptical about its too-grandiose promises. That makes it a book for all of us who are attempting to live well in a fast-changing, AI-driven world.