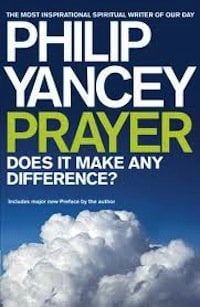 I don’t envy the man who writes a book on prayer, for I can’t think of too many topics that have been written about more extensively than this. There are many spiritual classics dealing with the topic and surely an author must wonder if anything he writes can contribute to the discussion. New to the fray is Prayer: Does It Make Any Difference by Philip Yancey. A guaranteed bestseller, this book, by virtue of the topic and the author, is sure to sell tens or hundreds of thousands of copies. And so it was with some interest that I read this book, interested in learning what so many people would learn from Yancey.

This book arose from Yancey’s determination that many Christians know prayer to be theoretically important but yet practice it very little. “Everywhere, I encountered the gap between prayer in theory and prayer in practice. In theory prayer is the essential human act, a priceless point of contact with the God of the universe. In practice prayer is often confusing and fraught with frustration. My publisher conducted a website poll, and of the 678 respondents only 23 felt satisfied with the time they were spending in prayer. That very discrepancy made me want to write this book.” This book is not a how-to guide. “I have not attempted a guide book that details techniques such as fasting, prayer retreats, and spiritual direction. I investigate the topic or prayer as a pilgrim, strolling about, staring at the monuments, asking questions, mulling things over, testing the waters. I admit to an imbalance, an overreaction to time spent among Christians who promised too much and pondered to little, and as a result I try to err on the side of honesty and not pretense.” He goes on to say, “If prayer stands as the place where God and human beings meet, then I must learn about prayer. Most of my struggles in the Christian life circle around the same two themes: why God doesn’t act the way we want God to, and why I don’t act the way God wants me to. Prayer is the precise point where those themes converge.”

I can’t deny that I was pleasantly surprised by much of the content of Prayer. Yancey is a deep thinker and one who excels at asking difficult but still useful and interesting questions. He has clearly invested a great deal of time and effort in prayer and in wrestling with the deep questions. He says much that is worth thinking about; worth pondering. “In prayer I shift my point of view away from my own selfishness.” “Prayer is the act of seeing reality from God’s point of view.” “The main purpose of prayer is not to make life easier, nor to gain magical powers, but to know God. I need God more than anything I might get from God.” “God is a Person too, and though a person unlike ourselves, One who surely fulfills more of what that word means, not less.” When discussing unanswered prayer he writes, “By answering every possible prayer, God would in effect abdicate, turning the world over to us to run. History shows how we have handled the limited power granted us: we have fought wars, committed genocide, fouled the air and water…” and so on. There is much in this book that will prove valuable, both that which comes from Yancey’s pen and that which he quotes from other authors and theologians. Yet there were several themes found in the book that I found troubling.

Yancey has, in the past, hinted that he adheres to the doctrine of Open Theism and believes in a somewhat less than omnipotent or omniscient God. His clearest affirmations of this were in his book Disappointment with God, a title that is often referred to and quoted in Prayer. While this new book does not contain an explicit affirmation of that doctrine, Yancey again drops hints that he does believe it. Only a few pages into the book he says, “A hundred times a second lightning strikes somewhere on earth, and I for one do not believe that God personally programs each course.” Much later, in the closing chapters, he writes, “I know a missionary whose wife and seven-month-old daughter were killed by a single bullet when the air force in a South American country mistook their plane for that of a drug runner and opened fire. ‘God guided the bullet,’ the surviving husband and father said to the press. We have held long discussions about that quote, because I do not believe the ‘Father of compassion’ guides bullets into the bodies of babies. Jesus himself refuted those who blamed human tragedies on God.” Did this tragedy occur outside of God’s control or knowledge? Yancey seems to take almost a middle position, but certainly does not affirm the truths of Scripture regarding God’s fore-ordaining of all events, no matter how tragic. Somewhere between these two quotes comes a similar one which comes from the mouth of an acquaintance of his. “I was trained as a Calvinist. What do I do with all that has happened to me? I don’t lay the accident at God’s feet–I don’t believe God micromanages the planet. I believe God is present in the midst of our brokenness. I just wish I could feel that presence.” Yancey presents a God that is simply far too human.

This emphasis is consistent with another theme that crops up several times. Yancey often speaks of human freedom and God’s overwhelming desire to protect the free will of the people He has made. But the free will proposed by Yancey is not the “bound freedom” of Luther and Edwards, but the libertarian freedom that is foreign to Scripture–the freedom that says a choice is free only when a person could also have chosen the exact opposite. In this area, as with several others, Yancey’s theology is sloppy. For example, in a couple of places he writes about miracles, but many of the so-called miracles would be better-termed providence. There is a thread of theological imprecision throughout this work that is troubling.

A further disturbing theme in the book is Yancey’s respect for all manner of perceived spiritual authorities. He affirms Mother Teresa and Martin Luther as equal authorities on prayer, even in the same sentence (and I don’t think he quotes anyone with greater respect or frequency than Mother Teresa). He often quotes Jewish rabbis as if their theology of prayer should be taken as equal to those who love Jesus Christ and who have submitted their lives and their beliefs to the New Testament. A vast quantity of the answers Yancey provides are based on the writing of people whose beliefs would not align with historic Protestantism and hence with Scripture. And, while this book is not a “how-to” guide, it does include an appendix that lists a wide variety of recommended resources. Among these are a great number of books that promote mysticism, contemplative prayer, lectio divina, Roman Catholic prayer guides and the like. There is a recommendation to a book that “gives guidance to different personalities, following the Myers-Briggs Type Indicator test” (something Jesus surely overlooked when teaching us to pray). In fact, the good resources are by far outweighed by the dubious or those that are just plain bad. For example, a section dealing with collections of prayers points readers to the Roman Catholic collection Christian Prayer: Liturgy of the Hours (which, as we might expect includes prayers to Mary) while overlooking classics like The Valley of Vision.

At almost 350 pages, Prayer is not a quick read. Still, Yancey is a gifted author and he makes those 350 pages easy and even enjoyable to read. Sadly, much of what he writes is false; dangerous even. The questions he asks are questions any Christian may have asked before him and will continue to ask long after him. Unfortunately, the answers he provides are often less than scriptural. Those who read this book and follow it by investigating the sources he recommends, could find themselves confused indeed. At the very least they will find themselves led further from the objective reality of Scripture and towards experiential and mystical subjectivity. While this book is meant to be an honest account of Yancey’s struggles with prayer, I couldn’t help but feel he was far more honest with his misgivings and his questions than he was with what he feels are the answers and solutions. When it comes to answers, he seems deliberately vague.

With books on prayer crowding the shelves at the bookstores I see no reason to recommend this one above the many alternatives that may not be as interested in asking the tough questions, but are surely far more honest in directing the reader to the Bible where the answers may be found.