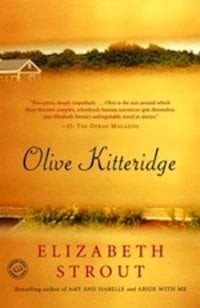 Last week I came to the point (and it happens at least once every year) that I just couldn’t face reading another book. At least I couldn’t face reading another non-fiction book. Usually this means that I take a break from reading for a while–I just find something else to do to bide my time. But this year, to my surprise, I kind of felt like reading a novel. I barely ever read novels–maybe one every two or three years; less, even. And yet here I was, suddenly craving some fiction.

While I keep up with the world of non-fiction, and especially Christian non-fiction, I have not kept up at all with fiction. So I wondered what I should read. I ended up looking up the list of recent winners of the Pulitzer Prize for fiction and figured I’d read some of those. Though they may not be the most popular novels out there, they will at least be good, right? So I grabbed the winners for 2009, 2007 and 2005. And then I read ’em. And now I want to offer just a short review of each, though as I write I find that I really do not even know how to review fiction. Nevertheless, let me give it a shot.

First up was 2009’s winner Olive Kitteredge by Elizabeth Strout. This is actually a collection of 13 short stories that read as if they exist in some nebulous space between short stories and a novel. What binds the stories together is the common setting of a small Maine town and the title character, Olive Kitteredge. Olive appears in each of the stories, sometimes as the protagonist and sometimes as a bit player. She is a complex and fascinating character–an elderly woman who is bitter, blunt and flawed. And yet she’s endearing in her own strange way. The stories follow her and her family and her town through the decades.

There is a bit of a soap opera quality to Olive Kitteredge, I suppose, something strangely voyeuristic. And yet Strout has created such complex and fascinating characters in Olive and the people around her that I could hardly look away. Even when the stories slow down, as they sometimes must, the writing is so good, the prose so wonderfully-written, that the book is a joy to read. “They had fun together these days, they really did. It was as if marriage had been a long, complicated meal, and now there was this lovely dessert.” That’s good stuff!

I suppose the morality of it all is just a little suspect at times. Strout’s characters are very human and yet perhaps just a little bit too complex for their own good. She continually explores love and the way it extends, or does not extend, to old age. She is gut-honest in doing so, sometimes for good and sometimes for ill. One thing she does not find is a character who truly loves and honors his or her spouse through all of life, from the beginning of marriage to the end. In almost every case, the characters have fallen in love and are now on the edge of falling out, or they are in love but each has a skeleton hidden from the other. So perhaps the book’s primary theme is the disappointment life brings. That sounds a little bit depressing and yet, for too many people, that is the reality–that as life passes, it becomes ever more disappointing.

Here is just a short quote that stood out to me:

During Debussy he fell asleep, his arms folded across his chest. Glancing at her husband, Jane felt her heart swell with the music, and with love for him, this man next to her, this old (!) man, who had been followed through life by his own childhood troubles—a mother always, always mad at him. In his face right now she felt she could see the little boy, furtive, forever scared; even as he slept here at this very moment there was a tautness of anxiety on his face. A gift, she thought again, placing her mittened hand lightly on his leg, a gift to be able to know someone for so many years.

The second book I read was The Road by Cormac McCarthy. This is a novel set in a post-apocalyptic world (and yes, the book was recently made into a movie). As such it is very dark and dreary in its writing and in its setting. In fact, McCarthy does a remarkable job of making the prose match the setting. And I mean that as a good thing. As you read you’ll find that the language wonderfully suits the subject matter. And when something is meant to stand out from the dreariness it does so through the vibrancy of its language (which reminded me of the girl in the read coat in the otherwise black-and-white Schindler’s List). Here is the kind of prose he writes:

He walked out in the gray light and stood and he saw for a brief moment the absolute truth of the world. The cold relentless circling of the intestate earth. Darkness implacable. The blind dogs of the sun in their running. The crushing black vacuum of the universe. And somewhere two hunted animals trembling like ground-foxes in their cover. Borrowed time and borrowed world and borrowed eyes with which to sorrow it.

We never do find out what happened to the world–just that some great woe befell it; the majority of humans were wiped out and those that remained were reduced to life without technology, without joy; they are battling one another and even eating one another. All the horror of humanity is revealed in this world, and yet one man is traveling with his son, trying desperately to keep him alive, trying to find some kind of peace and safety.

The book is deep and deeply stirring. There are a few swear words along the way and a few kind of gross but largely non-graphic scenes (mostly dealing with cannibalism). Though The Road is not for everyone, those who enjoy fiction that offers more than a light read will be drawn into it. I do not know much about McCarthy, about what he believes and why he believes it, but in this book he proves that he can look deep within humanity and see the ugliness that lurks there.

The 2005 Pulitzer Prize winner was Marilynne Robinson for her novel Gilead. This one may be familiar to you since it deals with deeply spiritual themes. The central character in this book is John Ames, a preacher who has lived almost all of his life in Gilead, Iowa. Married late in life and now facing an imminent death, he writes letters to his seven-year-old son. He tells of his life, trying to tell his son all those things that he will not be able to explain before death comes and takes him away.

I’m trying to tell you things I might never have thought to tell you if I had brought you up myself, father and son, in the usual companionable way. When things are taking their ordinary course, it is hard to remember what matters. There are so many things you would never think to tell anyone. And I believe they may be the things that mean most to you, and that even your own child would have to know in order to know you well at all.

Once again, the writing is beautifully crafted. It is a book to be savored. I began reading expecting that there would be a plot, a climax, narrative tension–all of those things that tend to advance a story from the first page to the last. But once I realized that Gilead is not that kind of book, I was able to stop looking for it. I was able to slow down and just savor the writing.

To me it seems rather Christlike to be as unadorned as this place is, as little regarded. I can’t help imagining that you will leave sooner or later, and it’s fine if you have done that, or you mean to do it. This whole town does look like whatever hope becomes after it begins to weary a little, then weary a little more. But hope deferred is still hope. I love this town. I think sometimes of going into the ground here as a last wild gesture of love–I too will smolder away the time until the great and general incandescence.

Of the three books here, this is probably the least exciting, but the one with the most to offer. It is a book that you may need to work at a little bit, but one that will reward a close reading.

One quick thought before I close. An interesting benefit of reading books like these–the books that gain recognition–is that they provide a window into our culture, into what people believe, what they enjoy, what they want. But I have a question: I wonder, do we know more about culture from these books, largely written by intellectuals, or from the popular novels of Tom Clancy and Stephen King and the others who sell millions and millions of copies? Which one is the more accurate representation?