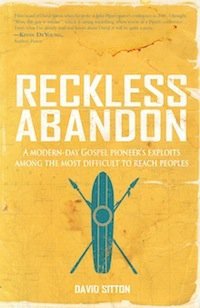 Buy from Amazon
If books dealing with death are to be a regular part of my reading diet, so too are books on missions. I don’t mean missional living or the mere theory of mission work, but books describing real work on the real mission field. In Reckless Abandon, David Sitton of To Every Tribe Ministries has given us a good one as he recounts a lifetime of experiences among the most difficult to reach peoples.

While Reckless Abandon is certainly not less than a book of stories from the field, it offers significantly more than that. As Sitton recounts his experiences in Papua New Guinea, he weaves into it his own philosophy of missions, one that calls for (you guessed it), reckless abandon. He defines the term like this: “To give oneself unrestrainedly to the cause of Jesus and the promotion of His kingdom without concern for danger and the consequences of that action.” His life models just that.

That kind of recklessness and abandon begins with an understanding of the beauty and power of the gospel. He says it well: “The gospel is so valuable that no risk is unreasonable. Life is gained by laying it down for the gospel. If I live, I win and get to keep on preaching Christ. If I die, I win bigger by going directly to be with Christ and I get to take a few tribes with me.”

His life story exemplifies that level of commitment. Converted as a young man, he very quickly determined that he was being called to foreign missions, and not only that, but was being called to go where no one had gone before. He wanted to be like Paul, not building on another man’s foundation but laying the foundation himself. He soon found himself in Papua New Guinea, trekking through the jungle, approaching tribes that had never even seen even a single caucasian man before. Wherever he went he proclaimed the gospel. Needless to say, his life has not been one of ease, but the Lord has used him powerfully to save the lost and to inspire others to follow in his footsteps.

I would encourage you to read Reckless Abandon to marvel at how the Lord has used a man who, by his own description, seems to be unremarkable and no more than average in many of his abilities, but driven by a passion to see God worshipped all the way to the earth’s farthest corners. And read it to see how much work remains and how many more people are needed to take the gospel to those who have never once heard the name of Jesus.

Written in an informal, conversational tone, it is not difficult to imagine as you read these pages that Sitton is sitting with you, simply recounting some of what he has seen and done in his thirty-four years of ministry. You will be inspired; you will rejoice.

All I have read and heard and watched inclines me to rejoice over the vision and theology and mission of David Sitton. I thank God for his Christ-exalting, God-centered, Bible-based courage to focus his life and ministry on the unreached tribal peoples. Like no one else I know, David Sitton puts his body where his mouth is. The risks are high; the reward is overwhelming. I commend To Every Tribe Ministries for your support and involvement. May the Lord of glory spread his fame through all who partner with this ministry to make a name for Jesus among the nations.