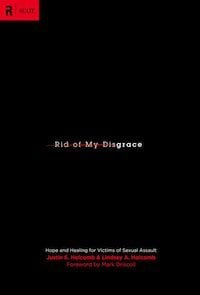 Buy from Amazon Buy from WTS Bookstore
I wish this book had not been written, or more properly, I wish there was no need for this book to be written. I wish there was no such monstrosity in the world as sexual assault. Yet the ugly truth is that sexual assault not only exists, but is all too common. The statistics are shocking, alarming. And therefore, because sexual assault exists and because of its prevalence, I am grateful that Justin and Lindsey Holcomb wrote Rid of My Disgrace. He is a pastor at Mars Hill Church and adjunct professor of theology at Reformed Theological Seminary while she is a deacon who counsels victims of sexual assault; together they are compassionate and theologically-sound, able to provide hope and healing for those who have been victimized.

I do not understand the consequences of sexual assault upon its victims. There were times as a child I came perilously close to being victimized–that school janitor, that older boy. But each time someone or something intervened. I am grateful for my ignorance here. I do not understand how and why this kind of assault impacts its victims at such a deep level and how those consequences can extend through an entire lifetime. But I want to understand as much as I am able. I know so many people who have fallen prey to predators, so many who bear the marks on their bodies and souls. And I want to be able to love them well, to walk with them through their healing. And this is why I read Rid of My Disgrace. This is a book meant to equip all Christians, those who have been hurt and those who know people who have been hurt.

I found the book extremely enlightening. The Holcombs write with care, precision and wisdom. Best of all, they write with Bible in hand. They write about this subject in three parts: Disgrace, Grace Applied and Grace Accomplished.

They begin by defining sexual assault and describing its effects. Both of these steps are necessary because some people do not understand that they have been sexually assaulted while others believe their experience is unusual or the effects they’ve suffered irrational. The authors’ definition is as follows: Sexual assault is “any type of sexual behavior or contact where consent is not freely given or obtained and is accomplished through force, intimidation, violence, coercion, manipulation, threat, deception, or abuse of authority. Such a definition goes beyond a too-narrow view common in our society while also expanding the spectrum of actions that can be considered assault.

Having written of the disgrace of sexual assault, they begin to apply grace, and they do this by looking to the effects of sexual assault. “The beliefs that accompany the development, maintenance, and increase of disgrace and distress are directly responsible for generating dysfunctional emotions and their effects for victims.” God’s grace, applied to the deep wound, offers the victim “the gift of refuting distortions and faulty thinking and replacing their condemning, counterfactual beliefs with more accurate ones that reflect the truths about God, yourself, and God’s grace-filled response to your disgrace.” The authors describe and then apply God’s grace to six common consequences of sexual assault: denial, distorted self-image, shame, guilt, anger and despair. In each case they go straight to the cross to show how the gospel provides an answer and antidote and to show how Jesus Christ can both sympathize and heal. Alternating with the chapters are the stories of victims who describe the abuse they faced, the consequences it brought, and the hope and healing they have found in Jesus.

If there is one area I might challenge the authors it would be in their brief discussion of forgiveness. They advocate extending forgiveness to an offender, even if that offender is unwilling and even if communication is impossible. In this case forgiveness is a transaction between a victim and God. Based on what I understand from the Bible, I prefer to define forgiveness in such a way that it requires the participation of both offender and offended; in this way forgiveness must include reconciliation, even if the consequences of the offense are not removed. That being the case, I would be hesitant to encourage a person who has been sexually abused to forgive someone who has sinned against them unless that person desires to be forgiven. (See this article for more on this subject.) I would instead encourage them to maintain that posture and desire for forgiveness. However, this is but a minor point in the book.

The only other comment I would make relates to the tone of the book. If we could draw an admittedly artificial line and label one end “pastoral” with the other “academic,” I’d suggest that this book falls a little past the center-point and into academic territory. This makes it very helpful on the one hand as it covers ground slowly, methodically, and biblically. But it may also be a little too academic for certain readers. I suppose my concern is that some people may read a review like this one, buy a few copies of the book, and then hand them out. I don’t ever advocate handing a book to someone that you haven’t read yourself, so at the very least read it yourself before determining how you would use it as a supplemental resource pastorally, in discipleship or in counseling. For some readers this will be exactly the book they need to draw out important truths; for others it may prove too long or too dense. In such a case Bob Kellemen’s Sexual Abuse may be a good alternative.

Rid of My Disgrace is a frank and powerful book that is completely drenched in Scripture. It interprets the ugliness of sexual assault in light of the Bible and offers the deepest healing and restoration through the gospel of Christ’s completed work. I read it so I could better understand and, I hope, better serve people I love. I believe it will help me do that very thing.