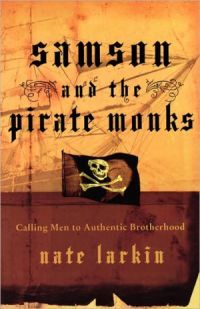 It starts like this: “My name is Nate, but you can call me Samson. That’s the code name my friends have given me, and for reasons you’ll eventually understand, I’ve given the same symbolic name to each of them. We are the Samson Society.” It’s an intriguing start to the book Samson and the Pirate Monks and I, for one, wanted to know more.

I have long observed that men tend to do pretty poorly with friendship. I don’t know if we are really bad at friendship or if most of us have just never given it a fair try. In either case, I think it’s clear that too few men have genuinely significant friendships.

Larkin was there. From the early days of his marriage he developed bad habits which, in time, grew into outright addiction. Before long he was hooked on pornography, visiting the seedy parts of town and, eventually, visiting prostitutes. Despite being raised in a Christian environment, despite being a pastor himself, he gave in to his habits, gave in to his lusts, and found his life and marriage crumbling around him. And he dealt with it all in isolation, without men around him who could help him and guide him. Even when he saw his sin and was desperate to overcome it, his life was devoid of meaningful relationships that could make a difference. For too long he wallowed in his sin.

It was only when he got other men deeply involved in his life that he was able to gain real victory over his sin. He came to realize that Christian friendship—men befriending men—is a precious gift. As he emerged from the mess of his addiction he says “I was willing to trust Christ, but I was not ready to trust the body of Christ. … What I did not yet understand was that while Jesus does offer a personal relationship to every one of his disciples, he never promises any of us a private one. … The church, according to the New Testament, is not a loose confederation of individuals. The church is a body—a living, breathing organism whose members are so intimately connected that they can only move together. On any given day, every member of that body needs help, and every member has some help to give.”

Samson and the Pirate Monks is partly Larkin’s biography and partly an account of the founding of the first Samson Society. It is also a call for men to put aside their pride and inhibitions and to find meaningful relationships with one another. And it provides more than a call—it provides a defense and a structure.

The book is full of helpful insights about life and faith. Things like this: “I have found that for short stretches of time I can convince myself that I am being faithful to God if I define faithfulness in terms of only one behavior.” That resonates, and so does this: “Self-righteousness … is a doubled-edged sword. If I have reduced holiness to a single behavior, then I am standing on one leg. One slip and I am nothing again, absolutely useless.” And this: “God, in his grace, has used addiction to shatter my moralistic understanding of the Christian faith and force me to accept the gospel. I am not a faithful man. That’s why I need a Savior. I cannot live victoriously on my own. That’s why I need a Helper and brothers. I cannot keep my promises to God—the very act of making them is delusional—but God will keep his promises to me.”

I find books like this easy to dismiss, perhaps especially because so many of us have tried accountability relationships and found them wanting. That and we have had so many calls to relationship, to accountability, to Eldredge-style openness. But then I think about men I know and wonder how they would receive this book and, even better, the kind of relationships it models. And then I realize that men are desperate for exactly what Larkin describes here. The book may be easy to dismiss, but to dismiss it too quickly and too easily would probably say more about me than about the book and its ideas.

I enjoyed Samson and the Pirate Monks thoroughly and would commend it to any Christian man. Read it, pillage it for ideas, and start pursuing true brotherhood.