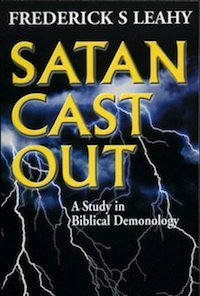 I have said it before: If there is any area in the Christian world that is dominated by superstition and speculation, it is spiritual warfare and the existence and activity of Satan and his demons. Far too many books on these topics are subjective and speculative rather than grounded in the firm truths of Scripture.

Frederick Leahy’s Satan Cast Out began as a project, an assignment. Back in the 1970s the Foreign Mission Board of the Reformed Presbyterian Church in Ireland asked Leahy to make a special study of demonology. They did this in response to phenomena that missionaries had been observing on the mission field. To that point very little had been written on the subject and it was discussed in only a passing way in seminaries. Leahy realized, “There is a crying need for an examination of this whole subject in the light of the Scripture alone, bearing in mind that the Scriptures are our only rule of faith and practice.” While his study is now nearly 40 years old, it remains in print and remains a powerful read.

Some knowledge of demonology and some study of Satan and his means of working in this world is crucial for the Christian. “Christians who are virtually oblivious of the malignant opposition of the fallen angels, are to some extent deficient in caution and dependence upon God. … The confrontation between God and Satan which centers on the cross of Christ is cosmic in its proportions and transcends the centuries of time. It is foolish and dangerous to wander, blind and deaf, along the firing line.” Leahy begins his study with an examination of angels, both good and evil. That unseen dimension, though invisible to us, is absolutely real. With this in place he turns to Satan and his present position between the cross and the consummation. Though Satan has been vanquished at the cross, he is still vicious. “To the believer who lives in time, there is a time-lag between the lightning and the thunder, between Satan being cast down and the hearing of the crash of his fall.”

From the position of Satan he advances to Satan’s strategies and to the ways in which he acts as the great adversary of Christians. With these pillars in place he then surveys the Bible to see how Satan and his demons behaved in the New Testament, in the Old Testament, and in the life of Christ. Three chapters turn to the role of Satan and his demons in the world today, and to the ways in which Christians should and should not interact with that invisible realm.

This book’s great strength is its firm anchoring in Scripture. Leahy is so hesitant to go beyond the bounds of Scripture and so committed to basing every one of his words in God’s Word. The final chapters are very practical, but still reliant on the authority of the Bible. So, for example, when Leahy grapples with methods of dealing with Satanic activity and demon possession, he says, “There must be a theology of victory behind and beneath the Church’s method of confronting Satan and his demons. Such method must be squarely based upon Biblical teaching, and must not be governed by any other considerations whatsoever.”

I especially appreciate Leahy’s counsel when it comes to casting out demons. “Well-meaning Christian workers, jealous for the glory of their Master, sometimes feel that they should follow the practice of commanding demons in the name of Jesus to depart. But if there is no experience of salvation though the preached Word, what has been accomplished?” Don’t command Satan to leave, call upon Christ to come! The great victory comes not when Satan is cast out, but when Christ is welcomed in.

“While it is a mistake to become obsessed with thoughts about the Devil and his legions, it is equally foolish never to give him any thought at all.” Though the Bible presents Satan as a cunning and ruthless foe, it also presents him as a vanquished foe and one whose power is infinitesimal compared to the omnipotence of God. Where we find Satan in the pages of Scripture, we also find comfort and assurance for the Christian. This book leads away from speculation and toward Scripture; it presents Satan as he is and shows God as infinitely greater. It is as good a book as I’ve read on the subject and it receives my highest recommendation.

(Satan Cast Out is available at Amazon and Westminster Books)