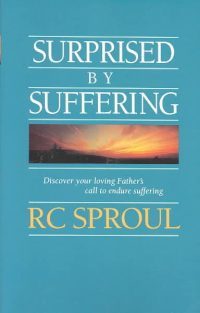 Buy from Amazon Buy from WTS Bookstore
Blogs often have a living quality to them, where an author picks up older content, improves it, and posts it again. I’ve been known to do this and have seen plenty of other bloggers do the same. And why not, really. The medium lends itself well to that kind of change and growth and evolution. Occasionally those who write books have the opportunity to do the same thing, to take an older book, improve it, add to it, and print it again. Such is the case with R.C. Sproul’s Surprised by Suffering. First released by Tyndale House in 1988, it has subsequently be expanded and re-released by Reformation Trust, typically a sign that the rights to the book had reverted back to the author.

Surprised by Suffering deals with “The Role of Pain and Death in the Christian Life” (according to the subtitle). And it deals with it well. Sproul wants the reader to know that, though death is a foreign state to humanity, one that came about only by the fall into sin, it is nonetheless inevitable and something that God expects us to do well. “Death is unnatural. It may be natural to fallen man, but it was not natural to man as he was created. Man was not created to die. He was created with the possibility of death, but not with the necessity of death. Death was introduced as a consequence of sin. If there had been no sin, there would be no death. But when sin entered, the curse of the fall was added. All suffering and death flow out of the complex of sin.”

Here Sproul writes about a wide variety of topics relating to suffering and death, with the first half of the book looking at life leading up to death and the second half looking at life after death. A book that is pastoral in its tone, Sproul offers hope to the Christian as he faces the inevitability of suffering and dying.

There is a sense in which death is a calling, a vocation, that God demands each of us to face. “Death is a divine appointment. It is part of God’s purpose for our lives. God calls each person to die. He is sovereign over all of life, including the final experience of life.” And when God talks to us of death, he emphasizes not where or why or when we will die, but how. “When Scripture speaks of the how of death, the focus is on the spiritual state of the person at the time of his death. Here we see the ‘how’ of death reduced to only two options. We either die in faith or we die in our sins.” This leads us, of course, to the gospel which offers us the only hope we can have as our eyes close in death.

If there is a chapter that stood out to me above all the others, it is the one titled “Speculations on Life after Death.” Here I see an example of what Sproul does so well–of what sets him apart as an author. Almost without reference to Scripture, depending simply upon force of logic and common sense and Christian worldview, he undoes the arguments of some great philosophers. He writes about “oughts” and the need for judgment handed out by a perfect judge. And only in the next chapter does he turn to the Bible to show what Scripture says. Some Christians balk at this, demanding a certain number of references to Scripture as if the simple number of references correlates to the author’s faithfulness to it.

But what we see with Sproul is that his whole way of thinking has been shaped by Scripture. He can go through a chapter with little reference to the Bible because the whole way he thinks is formed by the Bible. Eventually he gets to chapter and verse in order to claim the authority of God through his Word. But first he undoes secular arguments without and yet in a way completely consistent with the Bible.

A book that is eminently quotable, full of pithy phrases to stir the heart and give hope to the suffering and dying, Surprised by Suffering has found new life in this new edition. I highly recommend it.