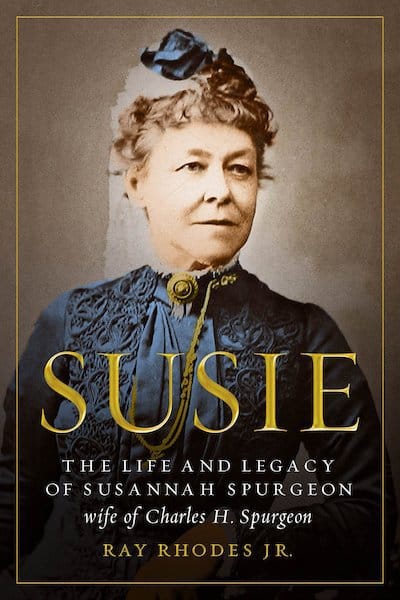 If you’ve ever seen a photo of a mountain or a waterfall—something grand and majestic—you know how important it is to also capture an object in the foreground. By putting an identifiable object in front of a mountain, you provide a visual cue as to the size of what’s behind it. Based on a photo, that mountain could be large or small, near or far. But when an object is set in front, you begin to understand and marvel at its grandeur. Of all the genres of non-fiction, I don’t think there’s any I enjoy as much as a good biography. A good biography is kind of like putting an object in front of a mountain—it reduces the vastness of history by providing a focal point to understand and interpret a distinct period. This is exactly the case with Susie, a new biography of Susannah Spurgeon by Ray Rhodes.

Susannah Spurgeon was, of course, the wife of Charles Spurgeon. Born Susannah Thompson, she had been raised in a Christian context but did not become a believer until she was nearly 21. Shortly after that experience she began to struggle with doubts about her spiritual state and found help through the care of a young pastor named Charles Spurgeon who was newly arrived in the city of London. He first provided her with a copy of The Pilgrim’s Progress and inscribed it, “Miss Thompson, with desires for her progress in the blessed pilgrimage.” Charles’s pastoral concern soon turned to affection, then romance, and the two were married in 1856.

The Spurgeons settled into a married life that generated some of the highest highs and lowest lows a couple could ever experience. Charles rose to great heights of fame as the Prince of Preachers. Wherever he went he spoke to great crowds and whatever he wrote was snatched up by an eager public. For much of his life, he was one of the best-known men in the world. Susie carried out ministry of her own, first as wife to Charles and mother to their two sons, then committing herself to the work of providing theological books to needy pastors. She was an eager correspondent to many and even penned several books of her own.

For all these great accomplishments, the Spurgeons suffered greatly. Charles was often burdened far beyond his ability to bear it and spent long stretches of his life weary or ill in both body and mind. By the late 1860s Susannah was bedridden with a mysterious ailment likely related to childbearing. Doctors and surgeons delivered her from some of the worst of the pain, but she remained an invalid for most of her life. Tragedy and theological conflict would scar both husband and wife. Yet both persevered in the faith and both left an indelible mark on the history of Christianity.

In this account of Susie’s life, Rhodes aptly defines her both in relation to Charles and apart from him. As wife to the great preacher, Susannah Spurgeon played a key role in supporting a great ministry. She was a spiritual rock in his life who prayed for him and who ministered truth to him. Often she was strong for him when he had no strength of his own and it’s not difficult to see how she was a crucial part of her husband’s success.

But what I especially appreciate is that Rhodes has not merely written a biography of Charles Spurgeon’s wife. Rather, he has prepared a biography of Susie, someone who had character and accomplishments of her own. Of course her life cannot be told apart from her husband’s, but she deserves more than to be only set in his shadow. She was a woman of tremendous graces and accomplishments and all of those are clearly described. She is not just Susannah Spurgeon, but also, without conflict, Susie.

This telling of Susie’s life is long overdue. It is well-researched, well-written, and well worth the read. It has deservedly become the definitive account of an important life.