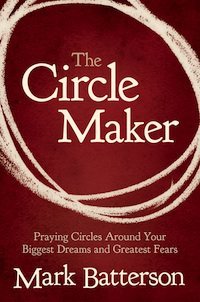 I didn’t know what The Circle Maker was about until I began to read it. Neither did I know anything about Mark Batterson, its author. I knew the book only as a Christian bestseller and its author only as a name that often appears in my inbox as people ask if I know anything about him or have read his books. “My pastor gave everyone in the church a copy of this book. Have you reviewed it?” Finally I read it.

Mark Batterson is lead pastor of National Community Church in Washington, D.C., a church regarded as one of the most innovative and influential in the country. He made his debut in Christian publishing with In a Pit with a Lion on a Snowy Day and followed that up with several other titles, including The Circle Maker.

The Circle Maker finds its title and inspiration in Honi Ha-Ma’agel, a Jewish scholar who lived in the first century B.C. and who is described in the Talmud. He is remembered as a miracle-worker in the tradition of Elijah and Elisha. Wikipedia provides a condensed version of his most famous miracle:

On one occasion when God did not send rain well into the winter (in the geographic regions of Israel, it rains mainly in the winter), he drew a circle in the dust, stood inside it, and informed God that he would not move until it rained. When it began to drizzle, Honi told God that he was not satisfied and expected more rain; it then began to pour. He explained that he wanted a calm rain, at which point the rain calmed to a normal rain.

Batterson says, “The prayer that saved a generation was deemed one of the most significant prayers in the history of Israel. The circle he drew in the sand became a sacred symbol. And the legend of Honi the circle maker stands forever as a testament to the power of a single prayer to change the course of history.” From Honi he has learned the value of big, bold, audacious prayers. On a very practical level, he has learned the value of drawing figurative (and sometimes literal) circles. The promise of his book is that it “will show you how to claim God-given promises, pursue God-sized dreams, and seize God-ordained opportunities. You’ll learn how to draw prayer circles around your family, your job, your problems, and your goals.”

The book has been widely-praised and has received hundreds of positive reviews, but surely people have simply failed to understand that Batterson has committed a grave error. He begins with Honi, an character who appears in books that are not (and have never been) regarded as inspired by God. He takes Honi as an authentic character who performed an authentic, God-ordained miracle indistinguishable from the characters and miracles of the Bible, and then reads what he learned from Honi back into the Bible. Rather than interpreting Honi through the lens of Scripture, he interprets Scripture through Honi so that from drawing circles he inevitably moves to marching circles and goes to Jericho, asking questions like “What is your Jericho? What promise are you praying around? What miracle are you marching around? What dream does your life revolve around?” He even reads Honi back into church history, looking to Christians of days past and saying that they were drawing Honi-like prayer circles.

The book’s examples and illustrations are largely drawn from his own life, from the dreams, goals and desires that he has seen fulfilled. He speaks of drawing a large circle around an area of Washington by walking around it while praying; before long he had a successful and growing church within that circle. He writes about circling a building he wanted for his church, marching around it, laying hands on it, even going barefoot on its holy ground, until it was his. Occasionally he shares examples from others so that he speaks of a friend who desperately wanted to be general manager at a certain golf course; he describes how his friend marched around the club house with his family seven times and then received the desire of his heart.

He anticipates the critique that what he advocates is a kind of “name it, claim it” theology and insists it is not. He says, for example, “Before you write this off as some ‘name it, claim it’ scheme, let me remind you that God cannot be bribed or blackmailed. God doesn’t do miracles to satisfy our selfish whims. God does miracles for one reason and one reason alone: to spell His glory. We just happen to be the beneficiaries.” I think he doth protest too much for what he teaches is very nearly indistinguishable. While he may not suggest praying for a bundle of cash or a fancy new car, there is no reason in the book why we would not do this. “I have no idea what your financial situation is, but I do know this. If you give beyond your ability, God will bless you beyond your ability. God wants to bless you thirty-, sixty-, hundredfold.” That sounds just too familiar.

When I had finished reading The Circle Maker I found myself reflecting on why a book like this one is so attractive. Why do people love it so much more than a more realistic, biblical book on prayer? What makes it resonate so deeply? Let me share a few suggestions.

First, Batterson describes the Christian life as one of constantly witnessing miracles. He must use the word “miracle” hundreds of times and writes often of all the miracles he has witnessed. I think there are times when every Christian longs to see God work in miraculous ways, yet the challenge for the Christian is simply this: Will you believe God at his Word or will you demand more?  Batterson promises miracles, yet as he does this he defines down miracles, making a miracle any answer to prayer. We prayed for a building and got it. Miracle! I needed a bill paid and found money. Miracle! In this way every answer to prayer is a miracle.

Second, he makes direct communication from God the normative experience for the Christian. He speaks often of God whispering to our spirits and encourages Christians to follow inner impressions, what he describes as “the promptings of the Spirit.” “Let me spell it out: If you want to see crazy miracles, obey the crazy promptings of the Holy Spirit.” I believe that every Christian longs for that unmediated, face-to-face contact with God; and yet again, the challenge for the Christian is whether we will be content with being indwelled by the Holy Spirit who illumines the words of Scripture so that God speaks to us through his Word.

Third, he often takes Scripture far beyond its context which allows him to make promises the Bible does not actually make. He regularly claims Old Testament promises that were clearly meant for a particular people at a particular time as if they were written specifically for him. He looks to Revelation 3:8 and uses it to speak of opened and closed doors as they relate to knowing and doing the will of God. He writes about the spiritual value of the Daniel diet. To be frank, he utterly and consistently butchers Scripture; the Christian reading with an open Bible will soon have to see that so many of Batterson’s claims cannot be supported.

Finally, he speaks confidently of things the Bible simply does not say and again, this allows him to claim more than the Bible allows. For example he says, “Sometimes physical contact creates a spiritual conduit. Proximity creates intimacy. Proximity proclaims authority. Drawing a prayer circle is one way of marking territory — God’s territory.” He trumpets the value of visualizing what you want as a means to obtaining it: “When you dream, your mind forms a mental image that becomes both a picture of and a map to your destiny. That picture of the future is one dimension of faith, and the way you frame it is by circling it in prayer.” The Bible gives us no reason to believe that God consistently relates proximity to power or that there is value in visualization (though you may note that New Age teachers often make both of those claims).

The Circle Maker is a mess. I admire Batterson’s desire to pray boldly and love his call to more prayer, better prayer, more audacious prayer. Yet so much of what he teaches is sub-biblical, extra-biblical or just plain unbiblical. With hundreds of good books on prayer available to us there is absolutely no reason to spend as much as one minute or one dime on this one.

Note: If you are looking for good, Bible-based books on prayer, here are some suggestions: 5 Great Books on Prayer.