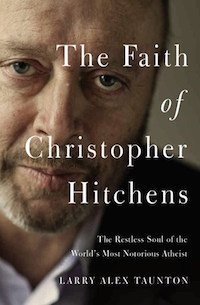 Christopher Hitchens was a fascinating figure. Along with Richard Dawkins, Sam Harris, and Daniel Dennett he ranked as one of the “Four Horsemen” of the New Atheism. With them he popularized a whole new wave of atheism and gave credence to millions who wished to reject any notion of God. He was angry, he was bombastic, he was clever, he was compelling. It is little wonder that he gained a huge following and became a worldwide celebrity.

Yet even while he was adamantly opposed to Christianity, he maintained friendships with a number of Christians, one of whom was Larry Taunton. Taunton’s recent book The Faith of Christopher Hitchens tells the surprising and fascinating story of their relationship and also provides an examination of Hitchens’ life and beliefs. “This book is not a biography of Christopher Hitchens. My objective is not to recount his life, but to give some account for his soul.”

Looking at Hitchens’ younger days and the dawning of his atheism, Taunton says, “Christopher hated God and was determined that he should master and tyrannize him. To do so, however, he now needed the tools of warfare. In atheism he had found a principle that corresponded to his grievance. Now he had to weaponize it.” He weaponized it through words. As he grew in his skill as a communicator, he grew in his ability to defend atheism and to refute all forms of theism. He used his words boldly and constantly, though, as Taunton shows, he did so out of ignoble motives: “The danger here—and Christopher fell wholeheartedly into its snares—was developing a love of words insofar as they were weapons for attack and defense of his position, rather than loving words insofar as they lead to truth.”

While there is little doubt that Hitchens had an acerbic wit and great skill with the pen, there is equally little doubt that he was often in over his head. He allowed his wit to compensate and distract from his ignorance in certain areas where he professed to be an expert. “Christopher was, remember, an actor, bluffing his opponents into overestimating his intellectual prowess.” Yet that bluffing was remarkably effective. While he may have lost many debates, he continued to win the hearts and minds of his many admirers.

September 11 marked a pivotal moment in Hitchens’ life and it was here that he began to change in some important ways. Like so many others, his deepest beliefs were shaken by the events that unfolded that day. “What others wrote off as a ‘contrarian’ posture was, in fact, a seismic shift in his political views and affiliations, as well as a total reevaluation of his fundamental assumptions about life.” He suddenly had to face evil in a way he never had before. Perhaps he got little glimpses of the utter bankruptcy of his worldview.

A second pivotal moment came when he was diagnosed with terminal cancer. Though in public he increased the fervor of his rhetoric, he was a different man in private. “Publicly, he had to play the part, to pose, as a confident atheist—that was the side of the debate he’d been given, the one that made him both famous and rich. Privately, however, he was entering forbidden territory, crossing enemy lines, exploring what he had ignored or misrepresented for so long. This exploration took on an added sense of urgency when he was diagnosed with cancer.” This forbidden territory included not only meaningful friendships with Christians, but guided explorations of its Scripture and doctrines. As he encountered Christians, he encountered the Christian ethic displayed in their lives. Most notably, Taunton and his wife had adopted an HIV-positive child and Hitchens had no category for this, no answer to something so very good, so very selfless. He admired it but at the same time had to admit that he wouldn’t even be willing to take in his own brother’s children if they were orphaned. “For the whole of his life, Christopher had longed for, but had cynically dismissed the possibility of, a higher love. Here was a glimpse that such love might be real.”

As Taunton’s friendship with Hitchens grew, they had opportunity to embark on a road trip together and during this time they read, explored, and discussed the Bible together. They read through the early chapters of John, discussing their meaning and importance. “Christopher Hitchens was a searcher. In search of a unifying philosophy of life, atheism offered nothing. In more honest moments, Christopher would acknowledge this joylessly, humorlessly, gloomily, pessimistically.” Now, as death approached, he was confronted with a unifying philosophy that could make sense of everything and give a glimmer of hope.

Cancer claimed Hitchens in 2011. There is no evidence that he ever revoked his atheism or that he put his faith in Christ. Taunton never makes that claim. To the contrary, he says that to Hitchens’ dying days he made efforts to ensure no one could claim a deathbed conversion. Yet he also points out, “Christopher wasn’t worried about others claiming he had a deathbed conversion; he was worried that he, Christopher Hitchens, might actually say something to suggest one.” He had explored the Christian faith in enough detail that he was counting the cost and wondering if it provided the answers he so desperately sought. Did he find them? We just don’t know. But it’s not impossible.

The Faith of Christopher Hitchens is a fascinating exploration and explanation of a very important figure. It describes and models the kind of friendship that Christians can and should have even with the most formidable opponents of their faith. It is a story worth telling and one that Taunton tells with great skill.