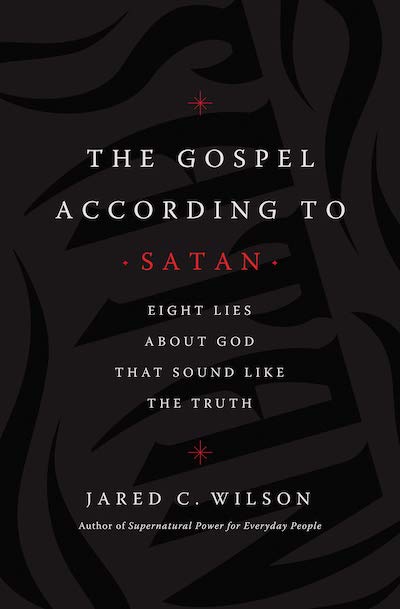 Satan is many things. But one fact the Bible makes perfectly clear is that he is a liar. Already by the third chapter of the Bible he has been deceitful (taking a physical form that is not his), he has been deceptive (getting people to question whether God is as good as they had thought), and he has told outright lies (full-out contradicting the words of God). And that’s just in the first three chapters! If Satan is such a liar and, in the fact, “the father of lies,” it should come as no surprise that he continues to float lies meant to confuse, deceive, and destroy human beings. Eight of these lies form the heart of Jared Wilson’s new book The Gospel According to Satan: Eight Lies about God that Sound Like the Truth.

To understand the purpose of the book, it is helpful to consider its origins. Wilson tells about going into a bookstore and spotting a copy of Wm. Paul Young’s non-fiction work Lies We Believe About God (read my review). This was a kind of follow-up to his mega-selling novel The Shack, and one that was meant to make plain some of the aberrant theology he may have merely hinted at in his fiction work. As Wilson read the table of contents and skimmed through the book, he realized “If the devil wrote a book about God, it might read just like this.” And voila!—a book was born.

That’s not to say that The Gospel According to Satan is exactly a rebuttal to Young, though Wilson certainly does address some of his claims. Rather, Young’s work got Wilson thinking about the kinds of lies Satan tells people in the world today—lies that have just enough of a ring of truth and are repeated often enough that people fall for them. Even some Christians fall for them.

Why does he call this “the gospel” of Satan? Because “the best trick of the devil is getting you to think his ideas aren’t just yours, but even God’s. So he creates his own ‘gospel,’ a perversion of the real one. It sounds like good news because it appears to answer questions we’ve always had, satisfy desires we’ve always felt, solve mysteries we’ve always pondered. If he can give his lies the ring of truth, so much the better.” He seeds his “gospel” as a better, more fulfilling, less costly version of the true gospel. Many are taken in by it. What Christians need to do is “expose the lies, examine how they work, explore why they’re so compelling, and explain how to overcome them with the truth.”

That is exactly what Wilson does in his book. Each chapter examines and rebuts one of these lies, while proposing a much better alternative: God just wants you to be happy; you only live once; you need to live your truth; your feelings are reality; your life is what you make it; you need to let go and let God; the cross is not about wrath; God helps those who help themselves. Those who read will see that each of these lies resonates in the modern world, but actually has roots much deeper in time; each has challenged humans for ages.

I think Wilson’s format is effective and his book will serve several audiences. It may challenge unbelievers to reexamine their pessimism and to be less dismissive of the Christian faith. It may challenge true believers who genuinely believe in Christ but who are too easily persuaded by the kinds of lies that have a distant ring of truth. It may challenge those who are theologically astute but who want to examine their own lives and be better equipped to help others live according to God’s Word. For those audiences or any other, I gladly commend The Gospel According to Satan.