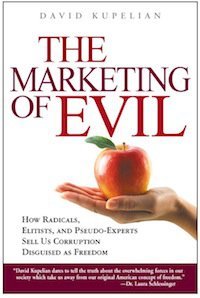 What has happened to America? What has happened to Western culture? How did it come to be that what was once–and not in the distant past but only a generation or two ago–regarded as self-destructive and immoral is now regarded as free choice and tolerance? “The plain truth,” writes David Kupelian, “is, within the space of our lifetimes, much of what Americans once almost universally abhorred has been packaged, perfumed, gift-wrapped, and sold to us as though it has great value. By skillfully playing on our deeply felt national values of fairness, generosity, and tolerance, these marketers have persuaded us to embrace as enlightened and noble that which all previous generations since America’s founding regarded as grossly self-destructive–in a word, evil.

Kupelian’s book, The Marketing of Evil was written to expose the fact that the moral decay which surrounds us is not mere happenstance and is not merely a product of the evolution of a higher society. Rather, evil and immorality have been carefully, deliberately and often brilliantly marketed to us. “Radicals, elitists, and pseudo-experts” have sold us corruption disguised as freedom. Through ten chapters, he exposes ten different areas of moral decay and the deliberate actions that have foisted them upon us.

He begins with gay-rights, discussing the “war conference” that was held in 1998 by prominent homosexuals in Warrenton, Virginia, where they mapped out the future of the gay-rights movement. “Shortly thereafter, activists Marshall Kirk and Hunter Madsen put into book form the comprehensive public relations plan they had been advocating with their gay-rights peers for several years.” These men, both brilliant researchers, depended, in their own words “centrally upon a program of unabashed propaganda, firmly grounded in long-established principles of psychology and advertising.” Their strategy was followed with great success and has advanced the gay cause to what it is today. It has made homosexuality not merely accepted, but celebrated.

Following gay-rights, Kupelian turns to several other hot issues. He discusses the myth of church-state separation, the culture of sex and rebellion in today’s youth, multiculturalism, the meltdown of the family, our culture’s obsession with sexuality, the education system, media and abortion. He concludes by suggesting that the church of Jesus Christ is the last, best hope for America.

It’s often said that the Christian church in America needs revival. But this doesn’t necessarily mean ever-bigger tents with tens of thousands of us swaying back and forth, singing songs, giving speeches, and getting pumped up–and then going home and watching television. America’s real revival and genuine rebirth will be much less dramatic in the beginning. We might never even realize exactly how it came about. But it can happen, and we must pray that it will.

How will it come to pass? It’ll happen, dear friends, when we all simply go to our rooms, close the door, take a deep breath, and take a good, long, hard, honest look at ourselves. And then, quietly and humbly and fervently, we ask the living God for help, for insight, for direction–for salvation.

And I think he is right. At this point, nothing but a miraculous intervention of God can reverse the dangerous, depressing trend in our society. But I firmly believe, as does Kupelian, that the church of Jesus Christ is the hope for the world. Nothing but the church, Christ’s body, can bring hope and meaning and peace to a society bent on destroying itself.

The Marketing of Evil is a book that will make you wince. It will make you angry. It will make you appreciate or understand the brilliance of the evil one who is engaged in an all-out war against the biblical foundation upon which America was founded. And hopefully, it will serve as a wake-up call that evil is not merely an abstract concept, but is a force, a strategy, that is cunningly marketed and brilliantly deployed against all that is good.