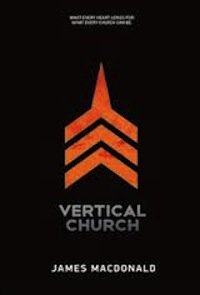 Harvest Bible Fellowship is a network of churches on the move. It seems as if every week brings a report of a new church plant somewhere in the world. From what I have observed locally, these are solid churches whose pastors love God’s Word and where people are being transformed by the gospel. James MacDonald is the founder of this movement and he refers to them as “vertical” churches. What MacDonald wants is for every local church to be a place where people have “a weekly experience with the manifest glory of God.” The local church is to be the one place where people experience what they can experience nowhere else.

Vertical Church is part manifesto and part instructional guide and is one of those unusual and unfortunate books that combines genuine strengths with disappointing weaknesses. The first half of the book is strong and provides a biblical basis for a vertical model of the local church; the second half is far weaker in explaining how to create one.

The Strengths of Vertical Church

Vertical Church has many notable strengths. The discussion of verticality is very helpful and provoked the pastor in me to think carefully about the worship services at my church and the role of church leaders in providing an experience of God’s glory and majesty. Our role is not simply to check off a list of boxes—singing, Bible-reading, preaching, prayer—but to lead people in an encounter with the living God. MacDonald’s desire to glorify God in every facet of the church’s life is laudable and challenging. He shares a great deal of wisdom earned through many years of ministry while critiquing both the church growth movement and those traditional churches that don’t care to grow at all.

A chapter on preaching shows why expositional preaching is at the heart of the Harvest movement and why it needs to remain there. A chapter on evangelism is a call to action despite fear and discomfort. There are many parts of the book that I highlighted and many concepts and even sentences that I need to explore in more detail in the future. Really, Vertical Church would have made an excellent 120-page book.

The Weaknesses of Vertical Church

But it’s not a 120-page book. Rather, it is a little bit over 300 pages and as it transitions from the “why” to the “how” of vertical church, weaknesses begin to outweigh strengths. A condescending and sarcastic tone begins to creep in while the joyful humility of reveling in God’s glory is supplanted by overbearing and overly-prescriptive instruction. Here MacDonald often relies often on false dichotomies, setting two possibilities in unfair opposition to one another. This is seen clearest in chapters dealing with music and prayer.

In the chapter on music, MacDonald turns away from definitions of worship that extend to all of life and says that worship is “the actual act of ascribing worth directly to God” and sets it almost entirely in the context of corporate singing. He argues against hymns—“great theology racing us by at a pace so dizzying that all we could express as we took our seats was effectively ‘that was all so true’.”—and instead advocates songs with fewer words and more repetition. He believes that worship in song should be:

Yet such claims are only barely drawn out of Scripture and go unproven. They may reflect preference or perhaps even a degree of wisdom, but never does he prove that they are mandated by God. He does not interact seriously with the songs of the Bible (whether the Old Testament psalms or New Testament hymns), many of which model worship that is to God exactly because it is about God. We do not have to choose between singing to and singing about and we do not have to choose between worship that is intellectual and worship that is heartfelt; these can easily co-exist.

The chapter on prayer, while displaying some great strengths, is also beset by similar weaknesses—broad statements, preference elevated to law, lack of biblical proof, false dichotomies. Does fervency in prayer demand volume? MacDonald says it does and offers only “the fervent prayer of a righteous man results in much” as evidence. Should “mind-only and whispered praying” be the exception in the Christian life? He says it should and turns to Psalm 116 where David says, “I love the LORD, because he has heard my voice” and Romans 8:15 where Paul writes, “You have received the Spirit … by whom we cry, ‘Abba! Father!’.” It goes without saying that there are times we may do well to pray aloud and with great passion, but the Bible does not command us to do so as a rule.

Overall, MacDonald seems drawn to external expressions of worship and supplication as if these are necessary indicators of the kind of vertical affection he longs to see. At one point he says “Theological giants like [John] Wesley, Whitefield, Edwards, and Lloyd-Jones all embraced and experienced great emotional expression as evidence of a deep work of God in their services.” Yet a reading of Edwards’ The Religious Affections will show that Edwards understood that emotional expression can be dangerously deceptive: “Nothing can be certainly known of the nature of religious affections by this, that they much dispose persons with their mouths to praise and glorify God.” MacDonald too often allows his personal and culture preferences and his extroverted personality to be prescriptive.

And then there are times where he shows shockingly poor judgment in illustrating with his own life. At one point he writes about the role of prayer in saving his church from bankruptcy. He prayed to the Lord and then called a contractor whose work had been woefully substandard. “Sensing the Lord infusing [him] with still greater boldness” he told this man, “If you do not ship the remaining steel for free, we will close the construction project permanently, take the entire church into bankruptcy, and I will spend the rest of my life pursuing a legal remedy for all damages incurred by your company’s failure to perform. You have until tomorrow at five o’clock to give me your answer, but don’t call at 5:05, because there is a big part of me now hoping your answer is no.” This kind of personal intimidation does not at all stand as an example of the fruit of the Spirit or the character of a man called to be an elder!

Before I conclude, let me express another considerable concern. I know I am meant to review a book on its own terms, yet I can’t help but note contradictions between this book and some of MacDonald’s actions in the past year or two.

At the beginning of the book are 9 pages of endorsements from Christian leaders, including men whose model of church would appear to be anything but vertical. Bill Hybels and Rick Warren are the gurus of church growth while Steve Furtick’s Elevation Church hardly models strength and verticality. Yet these men, and others like them, endorse Vertical Church. Meanwhile, these men are often endorsed by MacDonald in return, whether in the pages of this book or elsewhere. I simply can’t understand how MacDonald could pen a book like Vertical Church and ignore the appalling contradictions of T.D. Jakes, a man who holds an unorthodox understanding of the Trinity and who preaches the prosperity gospel in place of the true gospel. Yet he is a man MacDonald has befriended and defended. It boggles the mind.

Vertical Church is a book with both strengths and weaknesses—very helpful strengths and very dangerous weaknesses. If you are looking for a method to follow, I would certainly not recommend it for that purpose. However, if you are looking for examples to consider and evaluate, and if you can thinking discerningly to embrace what is helpful and reject what is so very unhelpful, you may well find the effort rewarding.