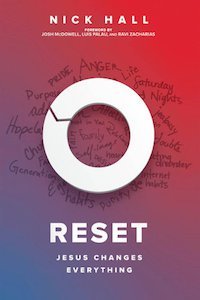 On July 16, hundreds of thousands of young people will descend on The Mall for Together 2016. The event’s web site promises, “Together 2016 is the day our generation will meet on the National Mall to come together around Jesus in unified prayer, worship, and a call for catalytic change. We’re coming together with as many people as possible who believe Jesus changes everything.” The event features a long list of speakers: Christine Cain, Francis Chan, Ronnie Floyd, Ann Voskamp, Ravi Zacharias, and many others. And, of course, there will be the musicians: Crowder, Hillsong United, Kari Job, Lecrae, Matt Maher, and Michael W. Smith just to get started. It promises to be a massive event. A couple of weeks ago came the announcement that Pope Francis will even make an appearance via video. “That His Holiness would choose to speak into this historic day is a testament to the urgency and the need for followers of Jesus to unite in prayer for our nation and our world.”

This event was conceived and organized by Nick Hall, founder of the evangelistic organization PULSE and author of the brand new book Reset: Jesus Changes Everything. This work was timed to coincide with Together 2016 and is in many ways a call to participate in the event. To examine the book is to understand what he hopes to accomplish at Together 2016.

Reset begins as a biographical work that tells about the beginning of Hall’s ministry. A man of unusual zeal, he has an all-consuming passion to see souls saved. Since his college days, he has been touring the world holding arena-sized evangelistic events for young people. As he tells the story, it seems that he has met with great success, at least judging by the numbers he offers: “I was subsequently invited to tour with a group of bands to forty-seven cities around the country as part of Winter Jam, a gathering that drew about ten thousand … each night.” “If we needed to reset our priorities, I explained to the ten thousand or so people gathered there that night, then Jesus could help us do that.” “As a ministry, we’d already done events in thirty-nine of the fifty states, reaching two and a half million people and seeing a half million of them respond to the gospel.” “…in the end, more than fifty thousand people (that we know of) surrendered their lives to Jesus.” “Over the year to come, our tour reached six hundred and fifty thousand people.” From his description, it seems that he has spoken to many millions and seen hundreds of thousands of them turn to Christ.

“Reset” is the gist of Hall’s message, his one-word summary of the Christian gospel: “Jesus offers a reset to anyone from anywhere, for anything. All we need to do is turn to him.” Or “Whatever has been tripping you up, a reset is available to you. You don’t have to earn it, buy it, beg for it, or swipe it when nobody’s looking. It is yours, free of charge. It is yours, by the grace of God. All you have to do is receive it, open hands and open heart. Say yes to the life you were meant to live. Say yes to a Father who’s good.” Time and again he leads to a call like this one: “You don’t have to go one more second in this life without knowing Jesus—his love, his care, his presence, and his joy. He is standing at the door to your heart and calling your name, asking if it’s cool to come in.”

If the first half of the book is a description of the gospel through the “reset” theme, the second half is seven common ways people feel a deep need for a reset: faith, plans, self-image, relationships, purity, habits, and affections. He closes with a call for this entire generation to experience a reset.

This “reset” message will be at the heart of Together 2016. In fact, it seems that those two words, “reset” and “together,” will dominate. “Reset” will describe the personal change he wants each person to experience—Christians as they reset from bad patterns to adopt better ones and non-Christians as they reset their lives to accept Christ for the first time. Meanwhile, “together” will represent the broad call for unity Hall envisions in which denominational lines will be forgotten and all who profess Christ will stand together against division. For this reason the speakers and musicians span conservative evangelicalism all the way to traditional Roman Catholicism. It is, by design, an ecumenical event.

I am going to offer a couple of critiques, but want to assure you that I do so somewhat tentatively. Hall is a man who is on fire to share the gospel with others. I, meanwhile, am constantly battling to be more than tepid when it comes to evangelistic fervor. I want to be careful before criticizing someone who deals seriously with God’s commands that we take the good news of the gospel wherever we go. As I read the book I was challenged by Hall’s zeal. I was inspired by his desire to dream and to actually attempt great things for the Lord. I was moved by his commitment to prayer. I was reminded of the value of speaking the gospel freshly to each generation. And yet I still had very real critiques.

The first critique is that “reset” does not quite capture the gospel message of the New Testament. I understand that Hall wanted to find a word that resonates with young people. The word “reset” is common in technology and, therefore, familiar to the millennial generation. Hall says “The offer of a reset is exactly what the gospel is about.” This is true, but only kind of. To reset something is to set it back to the way it used to function. Yet the gospel assures us that we have never functioned properly; we are not computers that came from the factory in perfect condition and have been gummed up with viruses and malware. We are not malfunctioning machines that need to be restarted, but dead souls who need to be given life. It’s not that the reset metaphor is utterly wrong, but that it is incomplete, it isn’t used in the Bible, and it isn’t sufficient, especially as the heart of the message. The full truth of the bad news and the full beauty of the good news is obscured by this soft “reset” gospel. And, indeed, Hall never deals with the full extent of our depravity and our spiritually deadness. He sets the good news in incomplete contrast with the bad.

The second critique is that “together” does not quite capture the gospel unity of the New Testament. Hall has determined that denominational divides must be put aside for the sake of the gospel. If we want to have a message that resonates with the world today, we must first eradicate that division. “Jesus directly challenged a culture of division. He prayed we would be one—one family, one body. And He told us to love our enemies. Everyone loves their friends; it’s when we love those who aren’t like us that the world takes note. It’s time to come together around Jesus in a counter-cultural moment of unity and love for each other.” Yet his position is naive. Iain Murray explains this in Evangelicalism Divided:

The ecumenical call in [the mid-20th century] was not for truth and salt; it was supremely for oneness: the greater the unity of ‘the Church’, it was confidently asserted, the stronger would be the impression made upon the world; and to attain that end churches should be inclusive and tolerant. But it has never been by putting unity first that the church has changed the world. At no point in church history has the mere unity of numbers ever made a transforming spiritual impression upon others. On the contrary, it was the very period known as ‘the dark ages’ that the Papacy could claim her greatest unity in western Europe.

Hall’s unity extends too far. “We’re coming together with as many people as possible who believe Jesus changes everything.” But believing Jesus changes everything is an insufficient basis for deep and lasting unity. I’m quite sure Satan himself agrees that Jesus changes everything! Hall’s unity extends a welcoming hand to those who deny the gospel of grace alone by faith alone in Christ alone. It denies or downplays crucial distinctions. It demands unity at the expense of the gospel. It extends so far that it will grant the pope the title of “His Holiness!” Yet as J.C. Ryle warned so many years ago, “Unity without the gospel is a worthless unity, it is the very unity of hell.” And “Unity which is obtained by the sacrifice of truth is worth nothing. It is not the unity which pleases God.” Hall’s kind of unity does not and cannot please God because it welcomes those who damage or destroy his gospel. Sadly, some disunity is good and necessary when it involves separation from those who deny what is most fundamental to the gospel.

I love Hall’s zeal for evangelism. I love his fervent prayer. I love his desire to see the church united. I love his heart to reach the Millennial generation. And make no mistake—his message is perfectly crafted for that generation. The message of “reset” resonates because who isn’t unhappy with some part of who they are or what they’ve done? Who doesn’t want a reset? “Together” resonates because who would advocate disunity or division? Combined, the two of them resonate because what young person isn’t enthusiastic enough to believe that simply gathering with a few hundred thousand others for some messages and rock concerts can actually change the world? Who wouldn’t want to be part of something so big and so exciting? But they don’t know that this has been tried before, and tried again, and tried again after that, and always found wanting.

None of this is to say that the event will be utterly fruitless. God works his miracle of salvation in a million different ways and he may just save his people–even many of his people–at Together 2016. I pray he does. But that alone cannot validate the event. I cannot endorse “reset” as the heart of the gospel. I cannot endorse Together 2016 as the fruit of the gospel. The first is sorely lacking and the second seriously misdirected. It may sound ironic or full-out fundamentalist, but I’d stay away from Together. 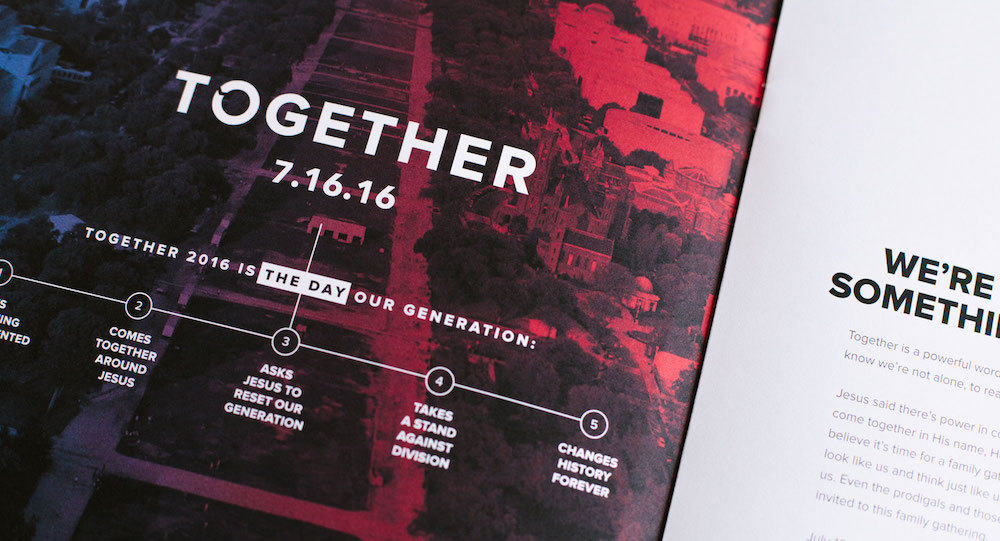