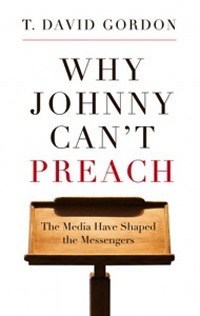 Buy from Amazon Buy from WTS Bookstore
Nineteen sixty-six saw the publication of a book titled Why Johnny Can’t Read. Its author, Rudolf Flesh, explained in it that societal changes were leading to illiteracy; children were increasingly unable to read, at least with the effectiveness of the children of years gone by. By the 1980’s, Linden and Whimbey had followed with Why Johnny Can’t Write in which they showed the similar societal trends were now keeping Johnny (a generic name used to refer to any child, male or female) from expressing himself in writing. T. David Gordon has self-consciously titled Why Johnny Can’t Preach after these books because he uses it to argue that the same societal trends that kept Johnny from being able to read and write have kept a generation of ministers from being able to preach. Johnny just can’t preach and Gordon just can’t take it anymore.

It is important to the context of this book to realize that, when he wrote it, Gordon believed he had only months to live. He had stage III colorectal cancer and had roughly a 25 percent chance of survival. “Having been concerned about the state of preaching for three decades, I believed that it would be irresponsible to leave the world without expressing my thoughts about the matter, in the hope that better preaching might be the result.” So this book has the air of a missive penned from a dying man and directed to dying men (though, happily, Gordon’s cancer is now in remission). As he says, “The manuscript is, therefore, at a minimum, heartfelt.”

I can think of at least a handful of books that have called contemporary preachers to task for their weak sermons or the unbiblical focus of their ministries. But this is the only one that comes to mind that takes on conservative preachers in conservative churches–the kind of men who preach expository sermons and who have ministries based on verse-by-verse exposition. Says Gordon, “I don’t intend to throw stones at others; it is the conservative evangelical churches and conservative Reformed churches with which I am primarily acquainted.” This is a look inward, then, and not a look outward.

The reason men cannot preach today, says Gordon, owes not to a lack of caring or a lack of effort; instead it relates primarily to societal changes. The book’s subtitle is instructive: The Media Have Shaped the Messengers. In this context media does not refer to mass media, but rather to the many ways in which information or data is communicated to us, the foremost being television.

How bad is the problem? According to Gordon, it is epidemic. “I would guess that of the sermons I’ve heard in the last twenty-five years, 15 percent had a discernible point; I could say, ‘The sermon was about X.’ Of those 15 percent, however, less than 10 percent demonstrably based the point on the text read. That is, no competent effort was made to persuade the hearer that God’s Word required a particular thing; it was simply asserted.” Ouch. At the very least, this guy tells it like he sees it. He does not allow the preacher to wiggle out by using shortened attention spans as an excuse. “Ministers have found it entirely too convenient and self-serving to dismiss congregational disinterest on the basis of attenuated attention spans or spiritual indifference. In most cases, the inattentiveness in the congregation is due to poor preaching–preaching that does not reward an energetic, conscientious listening. When attentive listeners are not rewarded for their energetic attentiveness, they eventually become inattentive.”

Societal trends, the foremost of which is the dominance of the picture over the word, have led to Johnny’s inability to preach. The problem is the condition of the typical ministerial candidate when he arrives at the seminary. The reasons he cannot preach are twofold: he cannot read and he cannot write. Each of these receives a chapter-length treatment. In the first, Gordon demonstrates that Johnny has never been instructed in the reading of texts. He has been taught to read to gather information, to read as a means to an immediate end, but he has never been taught to read with a view to how a text is formed. He reads for content while ignoring construct. “Culturally, then, we are no longer careful, close readers of texts, sacred or secular. We scan for information, but we do not appreciate literary craftsmanship. Exposition is therefore virtually a lost art.” In the second, he channels Neil Postman and other writers in demonstrating that Johnny is fast losing the ability to communicate well with the written word. In fact, by relying so heavily on technologies such as the telephone, he has stunted his ability to communicate with others in face-to-face contexts. Where the written word, carefully constructed, is a valuable medium for weighty content, the spoken word, especially over the telephone or other media, gives itself to levity and to thoughtless discussion.

After offering a few words on content, Gordon gives the beginnings of a prescription, a cure for the ills. He suggests that for Johnny to learn to preach he must, at the very least, have an annual review in which the church will tell him how effective they deem his preaching, he must learn to read texts closely and he must learn the sensibility of composed communication. These may not make him into this generation’s Charles Spurgeon, but at the very least they will give him the tools he needs to preach the Word of God well. “Our culture, at this moment, will not develop these sensibilities, and so Johnny will cultivate them only if he makes some self-conscious and deliberately countercultural choices about how he wishes his sensibilities to be shaped.”

While Gordon is prone to overstate his case at times, and while he may occasionally put preference in the place of law, he has certainly penned a book which stands as an urgent call for men to give themselves anew to the task, the calling, of preaching. It points them to several skills which will, without doubt, help them in their task of faithfully communicating the truths of God’s Word to the ears and the hearts of God’s people. I do think any preacher will benefit from reading Why Johnny Can’t Preach, though I would urge caution in handing it to your pastor–such a gift could easily be misconstrued. And do guard your heart as you read it as I think there is the potential that it could cause you to look unfavorably on your own pastor. Having said that, I think this is a valuable book and one that ought to be widely read.