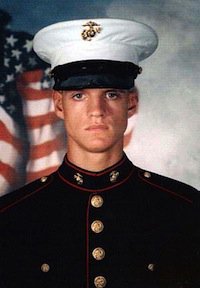 Jason Dunham of Scio, New York, joined the U.S. Marines in the year 2000. Just 18 years old when he enlisted, he quickly showed leadership ability and was chosen as a squad leader in Kilo Company, Third Battalion, Seventh Marine Regiment. Dunham’s unit took part in the invasion of Iraq and it was here that he would perform an act of outstanding gallantry.

On April 14, 2004, Corporal Dunham was in the town of Karabilah, leading a patrol to scout potential locations for a new base. Over the radio they heard that a nearby group of Marines had been ambushed by insurgents; at least 2 had received severe injuries.

Cpl. Dunham’s patrol jumped aboard some Humvees and raced toward the convoy. Near the double-arched gateway of the town of Husaybah, they heard the distinctive whizzing sound of a rocket-propelled grenade overhead. They left their vehicles and split into two teams to hunt for the shooters, according to interviews with two men who were there and written reports from two others. Around 12:15 p.m., Cpl. Dunham’s team came to an intersection and saw a line of seven Iraqi vehicles along a dirt alleyway, according to Staff Sgt. Ferguson and others there. At Staff Sgt. Ferguson’s instruction, they started checking the vehicles for weapons.

Cpl. Dunham approached a run-down white Toyota Land Cruiser. The driver, an Iraqi in a black track suit and loafers, immediately lunged out and grabbed the corporal by the throat, according to men at the scene. Cpl. Dunham kneed the man in the chest, and the two tumbled to the ground. 1

Two other Marines rushed to help, trying to subdue the driver. From a few yards away another Marine heard Dunham yell, “No, no, no–watch his hand!” The Iraqi man dropped a grenade, armed and ready to explode. Dunham immediately threw himself upon that grenade, covering it with his helmet and his body, to contain the explosion and protect his squadmates.

The resulting explosion left Corporal Dunham unconscious, face down in his own blood. He would never regain consciousness, dying several days later as a result of the horrific injuries he had sustained.

Dunham was subsequently recommended for the Medal of Honor, the highest military decoration awarded by the United States government. The official Marine Corps citation says, “By his undaunted courage, intrepid fighting spirit, and unwavering devotion to duty, Corporal Dunham gallantly gave his life for his country, thereby reflecting great credit upon himself and upholding the highest traditions of the Marine Corps and the United States Naval Service.” President Bush presented Dunham’s family with the Medal of Honor on January 11, 2007.

There is something in us that responds to stories like this one–something that moves us. I have often wondered if what moves us is the fact that this story is a reflection, though just a pale reflection, of the greatest story of all–the story of One who offered up his life for all of us.

I do not wish to minimize Corporal Dunham’s noble sacrifice. He was a brave man who earned the honors given him. But in even the greatest of human sacrifices we see just a pale reflection of the depth, the magnitude, the glory, the wonder of the sacrifice of the Son of God.