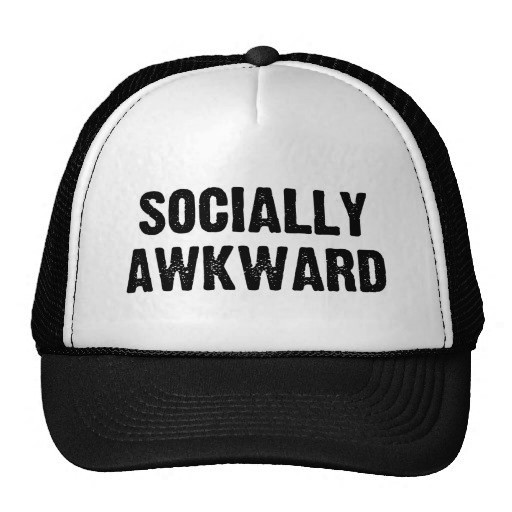 Awkwardness is a cultural phenomenon. Jump over to Google and begin to search for “awkward” and you’ll soon find lists, photos and videos of awkward everything–awkward family photos, awkward celebrity moments, awkward missed high-fives, awkward moments in history, and pretty much anything else that could possibly be considered awkward.

Even my kids know what it is to be awkward. It is not unusual for them to blurt out in one of those moments, “AW-kward!” They don’t know a whole lot about how life and relationships work, but they do know that it’s uncomfortable when things have gone wrong. Awkwardness comes about, after all, when social situations do not go quite as we intended; it is that feeling of discomfort or embarrassment that arises when social desires and expectations are missed.

So where did this cultural obsession with awkwardness come from? Why are we suddenly so concerned with it? Adam Kotsko makes a compelling argument that much of it stems from our entertainment. It is no doubt enhanced by our dedication to social media through which our awkwardness can go viral. He says, “Awkwardness is everywhere, inescapable. Awkwardness dominates entertainment to such an extent that it’s becoming increasingly difficult to remember laughing at anything other than cringe-inducing scenes of social discomfort.” Shows like The Office, especially the original British series, delight in it; shows and movies starring Sacha Baron Cohen revel in it; Curb Your Enthusiasm has been to awkwardness what Seinfeld was to irony. Comedies, especially those R-rated comedies targeted at teens and the immature, champion it.

As our awareness of awkwardness has grown, so too has our concern it so that, as Kotsko says, “We are masters at diagnosing it, if not avoiding it.” Now that we have a cultural awareness of its presence, power and difficulty, we find ourselves wallowing in it.

Our middle-class whites are absolutely hopeless when it comes to dealing with those of other cultures, wondering whether and how to note the difference, what kinds of questions to ask and not to ask–chafing at the supposed constraints of ‘political correctness’ yet feeling very acutely the pressure to differentiate themselves from their low-class and presumably racist Caucasian confreres. And when we all come home at night exhausted from a long day of awkwardness, what do we do but watch yet another cavalcade of awkwardness.

We all know this on some level, all feel the awkwardness that threatens to engulf everything, all sense very acutely the terrifying possibility that civilization itself might collapse in a simultaneous worldwide cringe. We’re all very concerned to develop our own strategies for avoiding or at least controlling social discomfort, so it’s perhaps understandable that so few have asked themselves what awkwardness is, what it means, what it’s telling us about our age and about ourselves.

Fewer still are concerned with asking what the Bible might say about awkwardness if it said anything at all (which, we should note, it does not, at least directly. However, it is equally noteworthy that a Google search will turn up many lists of awkward Bible moments).

The Source of Awkwardness

The Bible might warn us that the whole concept of awkwardness is downstream from popular culture far more than it is upstream from Scripture. The Bible’s silence on the issue tells us that it may well be a phenomenon we have constructed more than it is a genuine spiritual concern. It might warn us that our use and overuse of a term like Aspergers Syndrome as a diagnosis for awkwardness may just be allowing us to rationalize our discomfort and dress up our sinful embarrassment. It might warn us as well that the more we concern ourselves with awkwardness, the more awkward we will feel and more awkward others will feel around us. We can only blurt “Well, that was awkward!” so many times before others will note our obsession and begin to learn that they need to conform themselves to a certain standard when they are around us. They will soon learn that we have greater love for conformity than for uniqueness and that our love is contingent on not embarrassing us.

The Heart of Awkwardness

The Bible might tell us that awkwardness may well be related to our own pride. Situations are not awkward in and of themselves, but awkward because of missed expectations. We expect people to behave in a certain way and when they do not, we feel embarrassment for ourselves or embarrassment for them. Sometimes that awkward feeling comes when we feel shame for a person who is completely oblivious to his own lack of social conformity. Awkwardness is not a real thing; rather, it exists only in our own hearts and minds. It blames the other person or the situation, and in that way it shifts our gaze away from the heart which is, as always, the heart of the issue. Our concern in difficult and embarrassing moments ought to be ourselves and our own hearts more than the other person’s lack of social graces or ignorance of social mores.

What is it in a situation that makes me feel that awkwardness? Is it that my foremost concern in a social context is how people perceive me? Am I relating to others as a kind of self-love or as a means of better loving them? Do I avoid people who are difficult to speak to because what I perceive as their awkwardness may just lower me in the eyes of others? Awkwardness and pride often go hand-in-hand.

The Refuge From Awkwardness

The Bible might tell us that Christian community ought to have no interest in awkwardness, that it ought to be the one refuge from the grasp of awkwardness. It is in the church that people are to be welcome for who they are and where we ought to see them through the lens of Scripture rather than through the lens of popular culture. It is in the church that we ought to be able to embrace people without feeling the need to diagnosis or fret about the level of their social aptitude. To diagnosis a person as awkward is to pass judgment on them and to pass judgment on them using a cultural rather than a biblical standard.