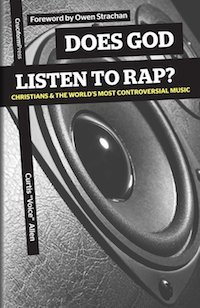 As a cofounder of Cruciform Press, I like to provide occasional updates on news and tell you about our most recent titles. Our November release, Does God Listen to Rap? Christians and the World’s Most Controversial Music, seems to have come at a good time. As many of you know, a panel at a conference of the National Center for Family-Integrated Churches was recently asked to share their thoughts on Christian rap. They were highly disapproving, igniting an Internet firestorm of sorts.

What’s interesting is that Curtis Allen wrote this book in part to respond to a similar frenzy. A rapper before he became a Christian, Curt continued to use his gifts for the church after his conversion. As Reformed rap started to gain a foothold several years ago, some well-known preachers began to endorse it. In the Foreword, Owen Strachan even recounts a public rap battle between Curt and him that didn’t end too well for Owen. But after becoming the first rapper to perform during a worship service at John Piper’s church, Bethlehem Baptist, Curt found himself in the position of defending Christian rap, and he wasn’t sure if his superficial reasons were biblical enough.

A lot has been written about rap in the last several days, much of it quite good. But if you like this music—or are interested in the much larger question of Christian involvement in cultural expression and the arts—there are still many good reasons to check out the book. Here are just a few unexpected questions that this book addresses:

The book also goes into depth on several subjects that all those recent blog posts simply couldn’t:

Because rap is a relatively new art form, it’s hard for many to separate it from the culture of violence and crime from which it arose. Curt readily acknowledges the sinful roots of hip-hop. But in the heart of the book he looks at the formation of culture and how it fits into God’s redemptive plan. It makes for an interesting read and helps you think through how we can be in the world but not of the world, especially when it comes to creative endeavors like music and art.

A lot of people have already formed an opinion on rap music, but too often those opinions—pro or con—have more to do with personal preference than any biblical principle. Even though Curt was definitely “pro rap” when he started the book, he sincerely wanted a real answer to the question, one that went deeper than “rap is okay because I like rap.” The result is a thoughtful examination of the creative process and how believers can use their gifts to bring glory to God.

The book is available at Amazon and at Cruciform Press (where you can get any of three ebook formats for as little as $3.99). Today through Saturday, however, the Kindle version is just $1.99.