One of the many gifts my parents bequeathed to me is a love of history. I have not seen my parents read many Christian living or spiritual growth books, but I have seen them read countless biographies and histories. One of my great joys is to buy them books for birthdays and Christmas (and any other occasion I can think of) and then to talk with them about what they’ve read. My mother recently read the new biography of John MacArthur and during our subsequent discussion I asked if she would consider writing down a few of her major takeaways. She was kind enough to do so. So what follows is written by my mother, Barbara Challies. Enjoy! 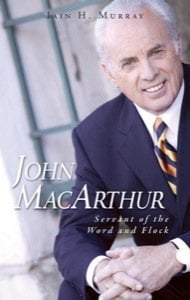 I read Iain Murray’s recent biography of John MacArthur after my husband received it as a gift. As my reading tends to be mostly about, and by, “dead white men,” I had little direct knowledge of MacArthur, who is still very much alive. I did, however, know him by reputation and held him in the highest regard for the wonderful consistency and forthrightness I heard of from others. So, when Tim asked me to write a brief response to Murray’s book, I did it gladly, but as a MacArthur neophyte.

I had expected to read of a man who loves God’s word with his whole heart and is determined to serve him with all biblical faithfulness. That is exactly what I did find. What I did not expect to find, and I am speaking with all honesty, is someone so very interesting. Why was I surprised? To be honest, I think it is because he is a nice-looking man with a nice-looking wife and children from a big church in California. I thought “they” were mass-marketed, with little appeal to this serious (ex-patriate) Canadian.

So what have I found interesting about this man? If you don’t mind, that is what I will deal with in a few brief paragraphs. I take for granted you are familiar with his excellent, biblically-based theology.

The first thing is the level of his insight. Love of the Bible and a love of church history–MacArthur has both–always make people insightful. They enable a bottom-line, “essence of the essence” judgment of issues that seems prophetic. In reality, it is the weighing of alternatives on a very finely balanced biblical-historical set of scales. What seems effortless is really the product of much reading and contemplation. MacArthur, as a very young man, was able to see and articulate the problem with the modern American church–easy believism and lack of holiness. When the charismatic movement began to become mainstream, he spoke out against it on the basis of the bedrock of “Scripture Alone,” and his knowledge of similar movements in the past which had harmed the church. He saw immediately that Scripture and experience could not stand as fellow conduits to knowing God. One must engulf the other. Similarly, with Evangelicals and Catholics Together, MacArthur quickly grasped that the essential question–What is a Christian in the first place?–was left unaddressed. The essence of his understanding of each of these issues is so simple that it is easy to underestimate the complete clarity needed to reach them. Again, I will say it is the cumulative effect of immersion in biblical study and church history.

The second thing that intrigued me about MacArthur is several unexpected aspects of his background and early life. MacArthur’s father, Jack, chose to pastor a church in Hollywood for a time. I find it interesting and commendable that, as a very conservative Christian, he would willingly and graciously go into one of the heartlands of anti-Christian America, taking his young family with him. MacArthur himself was an excellent athlete, with the potential of playing professional football. I love that commitment to share in, and appreciate, some of the best of our secular culture. I was amazed to discover that MacArthur had been friends with some of the black leaders of the sixties’ Civil Rights Movement–not engaging with them so much politically, as relationally–respecting their aspirations. How wonderful to identify with what was at that time very much a sub-culture. Finally, I appreciate that MacArthur and his wife were willing to take a very troubled young man into their own family, for a time–something totally “unnecessary” for the pastor of a large and flourishing church, but so very beautiful.

The Women in His Life

Another point of interest: God put many women into MacArthur’s early life. He surrounded him with them, actually! After John, his parents had three daughters and for many years, his grandmother also lived with them. We all know how important meaningful male relationships are for boys and MacArthur was very close to his father. What we sometimes overlook is the benefit of a strong mother-son bond. Margaret Truman, the daughter of Harry Truman, became convinced during her research that many of the American presidents had very close bonds with their mothers. The closeness seems, somehow, to give boys stability and “emotional energy” they take into their adult years. MacArthur recognized this when he said of his mother, “The degree to which I have enjoyed success as a father, as a husband, and as a minister of the gospel, is a result of the investments she made in me each day.” He also treasures his wife and respects her judgment. I am always impressed with a man who loves the women in his life sincerely and well!

A Man of Courage

One final, remarkable thing about John MacArthur is his courage. As Christians, we are called to stand–always to be found standing and ready to fight for truth. This is not easy, especially when most of the professing Christian world does not even seem to recognize the battle. MacArthur has often stood alone, or almost alone, and there is no indication that this will ever change. I don’t think he will be one of the Christian leaders that, in the words of a friend, “live too long,” and in his latter years undoes the good of his early life. May God continue to give him the courage of Athanasius as he said, “The world is against Athanasius. Then Athanasius is against the world” and of Luther, when he said in the face of the consensus of medieval Europe, “Here I stand. I can do no other.” Honestly, I think that lesson of courage is the most precious one he can bequeath us . May God help us all to be as faithful!