My friend Matthew sent me an interesting article today. It is the story of a Christian athiest. Yes, you read that correct: a Christian atheist. Isn’t postmodernism wonderful? The article begins like this:

I don’t believe in God.

Given these positions, this year I did the only thing that seemed sensible: I formally joined a Christian church.

And so he stood before a Presbyterian Church and affirmed that he endorsed the core principles in Christ’s teaching; intended to work to deepen his understanding and practice of the universal love at the heart of those principles; and pledged to be a responsible member of the church and the larger community. Wonderful. He concludes, then, that “I’m a Christian, sort of. A secular Christian. A Christian atheist, perhaps. But, in a deep sense, I would argue, a real Christian.”

I would like to know, purely out of interest, what he feels are the core principles in Christ’s teaching. That Christ is the only way to the Father? That seemed fairly central to Jesus. That we are all sinful God-haters? That was another key. But of course none of this would matter to him. He goes on to deny that the Bible is a literal book but affirms his belief that it is, at best, metaphorical and is meant to be read symbolically. He explains that his desire to join a church was based more on politics than theology. And then he suggests that anyone, even a member of a different religion, can be a Christian.

There is so much that can be said about this article, but really, is there any point? This is yet another example of postmodernism allowing a person to redefine hard truths. In this postmodern mindset, a person who does not like the meaning of a particular word is more than welcome to define it as he sees fit. The accepted, historical meaning of a word really has no relevance. If Mr. Jensen would like “Christian” to refer to a person who denies Christ but who accepts the teaching of this mythical figure, then we ought to welcome him with open arms.

His new church, St. Andrew’s Presbyterian Church, which seems to have no right to name itself after Andrew or even call itself a church, includes on their horrendously bad web site, a page dedicated to “words of wisdom.” They include “pearls of wisdom” from a variety of religions. It’s nauseating. Jensen seems to have found a church worthy of his new-found beliefs.

Stuff and nonsense, I say!

But if you really want to read about it, you can do so here.

Let’s move along. While I was at the Shepherd’s Conference I mentioned the ongoing pastor rushes – those times when pastors rush their way to the front of the church to secure the premier seats for each of the sessions. This rush happens before almost every session, provided that the worship center has been closed prior to that session. I managed to make my way into the church before one of the sessions and setup at the front of the church with my camera. The worship team finished their practice and staff members moved to each of the ten or twelve doors to the worship center. After a countdown from ten to zero, all of the doors were opened simultaneously. Sure enough, a crowd of pastors came belting down the aisle, jostling for the pews closest to the front.

Armed with my camera, I captured some visual evidence of this grand event. My camera is, unfortunately, a little dated and was not able to secure great pictures. But still, the following three shots will provide a glimpse of the infamous pastor rush.

This is the view from the front a split second after the doors were opened: 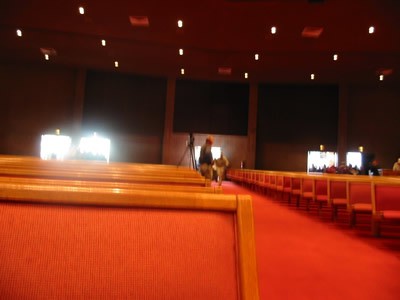 This is the view a couple of seconds later (the amount of time that elapsed between the photos is the amount of time it takes for my camera to reset between shots). So as to keep this an opportunity for humor and not gossip, I blurred the faces of the two men who were leading the charge: 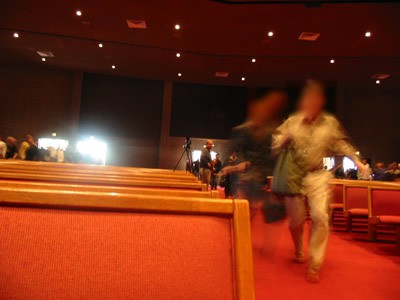 And this is the next shot. At this point the person who led the sprint down the aisle has nearly enveloped me. Thankfully I was seperated from him by the hard back of a pew. 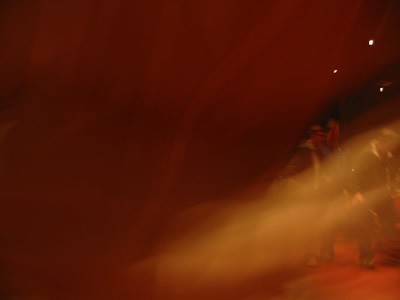 And finally, I had a person forward me a link to a new video from SermonSpice entitled Evangelism Linebacker. It is a blatant ripoff of Reebok’s series of ads featuring “Terry Tate: Office Linebacker.” I got to thinking about the web site and became offended at the name. SermonSpice. The site encourages pastors to add a little “spice” to their sermons by adding a video to it. Do we really need multimedia spice in our sermons? I have no real objection to the occasional funny video, but not during the sermon! If a sermon needs some spice that badly, perhaps the pastor needs to spend more time preparing.

And that is it for me for today. Needless to say, after a week away I have a large stack of work piling up around me. I’m a busy lad at the moment!