Kirk Cameron totally stood me up. “Come to a screening of my new movie,” he says. “I’ll be there and it would be fun to meet up.” So off I went yesterday, along with Aileen and our friends Julian and Stacey (yes, I think all of my friends have their own blogs), to attend a pre-screening of Fireproof in Buffalo, New York. But conspicuously absent was Kirk. He was a no-show. It hurt. (Though shortly after the movie ended, while I was drowning my sorrows in Dairy Queen, he called to apologize and say that his flight from L.A. had arrived late. I guess that’s a pretty good excuse.)

Here is a photo I snapped of Kirk and me outside the theater (Note: in this photo the role of Kirk is being played by Julian): 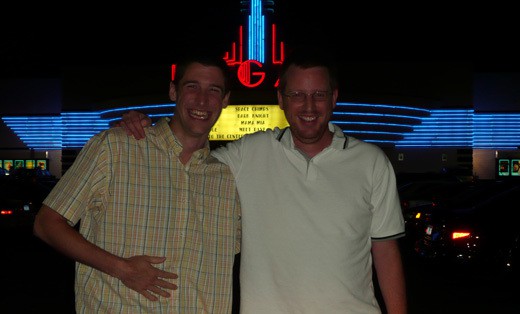 On to the film.

Fireproof is a product of the team who brought us Facing the Giants, a film produced with a budget of merely $100,000 that went on to gross $15,000,000. In this new film Kirk Cameron plays Caleb Holt, a fire chief in Albany, Georgia. While he is loved by the men who work for him and regarded as a hero in his town, Caleb struggles in his relationship with his wife, Catherine. After seven years of marriage it seems that the relationship is growing cold. Caleb finds solace in looking at pornography on the Internet while Catherine finds herself in a growing relationship with a colleague. As the couple begins to steel themselves for a divorce, and as they begin the process of ending their marriage, Caleb’s father presents him with a book and challenges him to begin a 40-day experiment he calls “The Love Dare.” Caleb decides to give it a shot, though he does so more to respect his father than to salvage his failing marriage. Struggling to show love for his wife even as she continually rejects him, Caleb calls his father and asks, “How am I supposed to show love to someone who constantly rejects me?” This gives his father an opportunity to share the gospel with him and, armed with the reality of a new love, Caleb sets out to win back his wife’s heart.

I can be excused, I think, for entering the theater somewhat apprehensively. After all, Christians do not have the greatest track record when it comes to combining great spiritual truths with sound art. But in the case of Fireproof I was pleasantly surprised. The film, though produced with a limited budget compared to most of what we see on the big screen, is very well put together. There are really no occasions where I feel a bigger budget might have improved the film, and this despite a couple of extended action sequences where I would almost expect to see quality compromised by budget restrictions. This is clearly not the case.

This is not to say the movie is without blemish. There are a few occasions when the dialog becomes just a bit stiff or stilted and this is especially true in the film’s opening moments. There are a couple of times when I feel that portions of the script could have done with just a little bit more tweaking or when a scene could have benefited from just one more take. Also, I feel that a handful of the minor characters are too weak, either through lack of development or through sub-par acting. But these are really the only downsides worth mentioning. (Is it worth mentioning that everyone in the town has a good Georgia accent except for Caleb? How is it that his father and mother both have that southern drawl and he doesn’t?)

Kirk Cameron is very solid in the lead role and was a great choice for it. He is strong throughout and at key moments, when given the chance to shine, is outstanding. Erin Bethea, who plays opposite Cameron as Catherine Holt is also very good, and this despite Fireproof being her first major movie role (and only her second role overall). Caleb’s father is excellent as a wise, loving, pastoral father. The prominent characters develop well and I found myself genuinely drawn into the story. While the movie deals with difficult and serious themes, it does not take itself so seriously that it cannot pause for a few laughs now and again.

One thing I like to evaluate in Christian movies is whether the film inserts faith themes subtly or blatantly. In the case of Fireproof the person who watches this film will walk away with absolutely no doubt that it is a Christian movie. Faith figures prominently and the gospel is clearly presented. Sinful actions and decisions are shown to have negative consequences and are eventually rebuked. While “The Love Dare” is used to draw Caleb back to his wife, it is clear that this is merely an instrument used by God to do His work. This movie is Christian by any measure. It sweeps to an ending that is powerful and emotional, stirring to tears at least several of the people in the theater with us.

I enjoyed Fireproof and am excited to know that, come September 26, a film with such a good message will be debuting on hundreds or thousands of screens across America. It is a refreshing film with a refreshing message that speaks boldly to a culture infatuated with immorality and convinced that divorce is freedom. I am grateful for this film and pray for its success.

Here is the film’s trailer: