What should I do if I become convinced that I might have been born again after my baptism? That can be a tricky question (for baptists, at least). There are a lot of people who end up being baptized two, three or four times. The Gospel Coalition recently shared two answers to the question, one from a credobaptist (a person who holds that baptism should follow conversion) and one from a paedobaptist (who holds that infants should be baptized). Recently I read J.D. Greear’s book Stop Asking Jesus Into Your Heart (my review) and found his answer to the question very helpful. B&H, the publisher, was kind enough to allow me to share it with you. 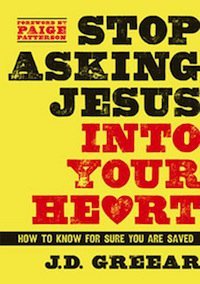 What do you do about baptism if you think that you might have been “born again” after your first one?

There are several answers to this question, depending on your particular situation. If your baptism occurred as an infant, I think the answer is clear: you should be baptized again. Your infant baptism was more a symbol of your parents’ faith (and thank God for their faith!) than yours. Every baptism we see in the New Testament, however, was a believer confessing his or her own faith. So be baptized “again,” fulfilling the hope your parents had when they baptized you as an infant. Don’t fear that you are dishonoring them. What better way to honor the hopes they expressed in your baptism than to choose for yourself to follow Jesus?

But what if you were baptized after an initial conversion experience but now suspect that your actual “regeneration” occurred later? Should you get re-baptized? There’s no hard and fast answer, but here’s what I’d suggest: if you know clearly that you were not saved at the point when you were baptized (i.e., you were pressured into baptism by your parents or friends, had no real grasp on salvation, had some ulterior motive, etc.), then be baptized again.

However, if your baptism depicted the beginning of a journey of faith, a journey marked by numerous “awakenings” and defining moments, let it stand, even if you wonder that perhaps your “regeneration” happened later.

Baptism is postconversion because it symbolizes a public choice to follow Jesus. Thus, to knowingly baptize people who aren’t saved yet would pervert and undermine the symbol and its role in the church. But getting the technical order wrong in your own experience is not a perversion of the symbol, it’s just a timing mistake—and a minor one, at that.

Baptism is not like the number sequence on a combination lock that if you get out of order will not open. So don’t obsess about making sure it happened after your regeneration. If you were baptized after making a sincere, conscious confession of faith, accept that and move on, even if you sometimes suspect that your regeneration may have happened later. As Christians we continually have new experiences of grace that make us feel like everything we have experienced up to that point was only dimness.

C. S. Lewis describes a day in 1951 (after writing The Four Loves and giving the talks that became Mere Christianity) where he passed from “mere intellectual acceptance of, to realization of, the doctrine that our sins are forgiven.” He did not think of this as his conversion, but he did say that in light of it “what I had previously called ‘belief’ looked absolutely unreal.” After writing one of the all-time classics of the Christian faith. When that happens to you, I would encourage you not to see it as conversion, but as a progressive deepening of your relationship with Jesus. God is continuing to mature you in Christ, intellectually, emotionally, and spiritually. Don’t get re-baptized.

If you are walking with Jesus now, see your initial confession of Jesus as Lord as the first evidence that God had planted the seed of life in you, even if what you understood then is hardly comparable to what you see now. The validity of our faith is revealed not by the intensity of our first reaction to it, but by our perseverance in it. So, if you are walking with Jesus today, the first sprouts of faith that led to your baptism were likely real ones. Let your first baptism stand.

The writer of Hebrews calls baptism an “elementary” thing that we should build from, not work up to (Heb. 6:1–3). So, unless you know you were either completely ignorant or willfully hypocritical at the time of your baptism, get busy with the meatier things of Christianity (i.e., serving Jesus and pouring yourself out for Him)! Move on.

And, if perchance you get to heaven and find out that you were regenerated subsequent to your baptism, it’s not like you’re going to be demoted to a lesser, “out-of-order-baptism” section in heaven. Baptism is indeed a very important symbol of the faith, a moment in which we identify with Jesus and declare our faith in His finished work to the world. But don’t make it more than that.

The comment section is open for your feedback. I’d appreciate it if my paedobaptist friends would refrain from defending their view of baptism here; that is a discussion for another time and place. And don’t get too bothered over the word “re-baptism” either; we acknowledge that from God’s perspective each of us is baptized only once, but, as we acknowledge as well in even having to ask this question, some Christians wonder whether they were baptized before or after they were saved.