Happy July! It is Canada Day up here in Canada and to celebrate a new month we’ve got a new batch of desktop wallpapers for you to download. They are all free for the taking!

A few notes: 320 x 480 is for your iPhone; 1024 x 1024 is for your iPad; your desktop or laptop may take any of the other sizes depending on your monitor size and a host of other considerations. If you’re not sure of the size, just find one that looks like it would be pretty much the same size as your screen. Generally you set one of these are your wallpaper by clicking on the link to the image, then right-clicking on the image (once it’s open) and selecting “Set as Background,” “Set as Desktop Background,” or something similar. If you aren’t sure, post a comment and we’ll try to help you figure it out.

One of the designers will win a $50 Amazon or Westminster Books gift certificate courtesy of Church Plant Media. How can you have your say? You can have your say in who wins by downloading a wallpaper? Each download counts as a vote (and no, you can’t download the same wallpaper 100 times and have your vote tallied each time). 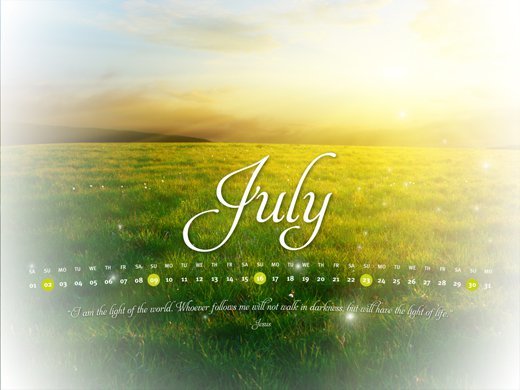 Tell me a little bit about yourself. 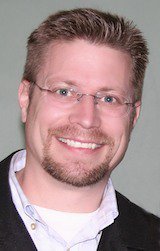 My wife Tricia and I live in Rockford, Illinois, and are the parents of five children (4 girls and 1 boy). We moved to Rockford from North Carolina just over four years ago to join Morning Star Church where we are actively involved. We love the people, the culture of grace, and the Gospel-centered teaching. It’s been exciting for us to belong to a vibrant church that is actively growing and encouraging people in their relationship to Christ and to each other.

My full-time employment is with Positive Action for Christ (www.positiveaction.org) which is based in Rocky Mount, NC. Positive Action produces Bible curriculum primarily for Christian and Home Schools as well as curriculum for church youth. I serve as the lone graphic designer as well as being part of the administrative team. In addition, I am able to use my talents to do graphic design for other ministries and businesses around the country (www.facebook.com/advancegraphics).

Created by Michael Davenport from Mebane, NC. We as Christians know too well the tendency of Martha – we are busy about many things, even for the Master. Let us not forget that Mary made the better choice – to sit at the feet of Jesus – to be still, and know that He is God. 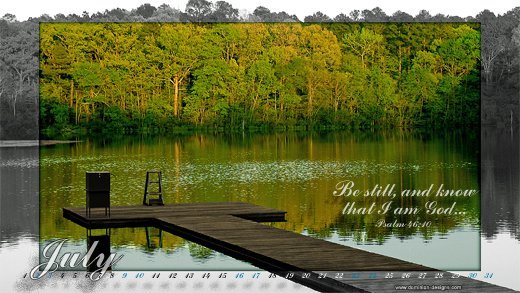 The Harvest Is Plentiful

Created by Dale Jackson from Corona, CA. “The harvest truly is plentiful, but the laborers are few. Therefore pray the Lord of the harvest to send out laborers into His harvest (Matthew 9:37-38).” 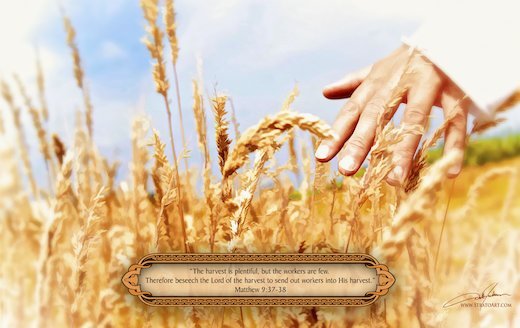 Jesus I My Cross Have Taken

Created by Denise from West Mindlands, UK. This is a photo of the beach in Bournemouth where it is sunny all day everyday. No, not really. 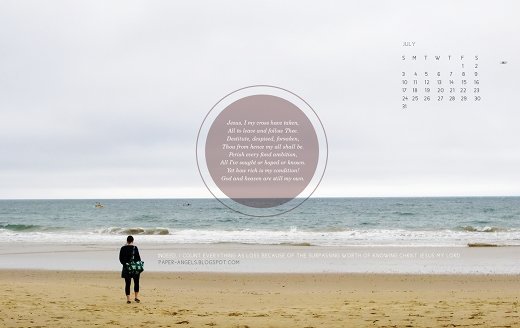 Created by Rina Kroes from Seattle, WA. While studying the Psalms of Ascent several years ago I was struck by something the teacher said, “Many of them have been like fountains of living Water to this road-weary traveler who detoured too many times into the ditch on her way to Mount Zion. That He still bid me ‘Come!’ is a grace gift beyond comprehension.” When swallowed by guilt over past transgressions, it reminded me that while I should not presume upon God’s pardoning mercy, I am completely forgiven through His Son’s atonement . He has blotted out ALL of my iniquities and I am eternally grateful that He remembers them no more. 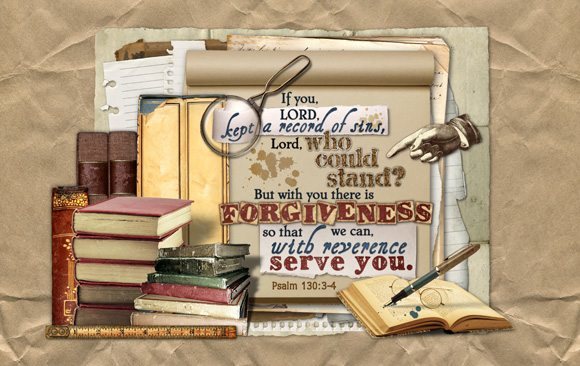 Created by James Cuenod from Cape Town, South Africa, UK. It’s easy to sing, “I’ll cling to the old rugged cross” and put on jewellery sporting shiny little polished crosses. It’s equally easy to forget that the cross was violent and agonizing and effected the death of death. It’s not just an ornament or an icon. [Note: James ran out of time so couldn’t create as many version of this as he would have liked] 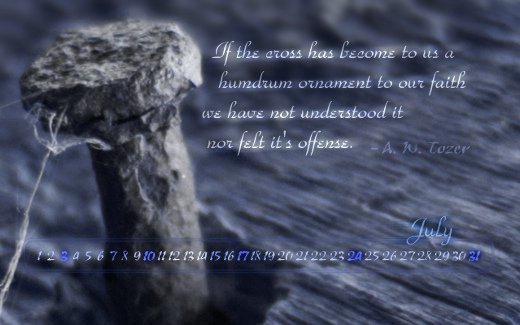 And Can It Be

Created by Aaron Wilson from Little Rock, AR. Our first thoughts of July usually include America’s birthday and the celebration of independence. I cannot help but reflect back on my own spiritual independence day, when I was freed from sin, self, Satan and ultimately, God’s wrath. I’ve never sang a verse of song that more appropriately describes my spiritual independence than Wesley’s “And Can It Be.” I just love this third verse. 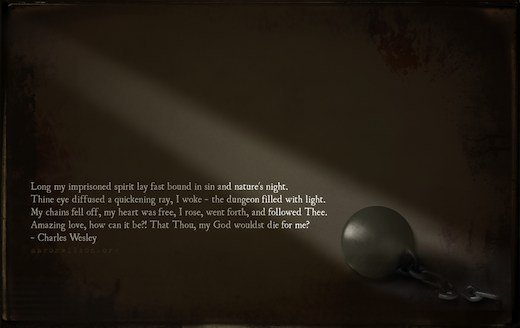 Created by Eric Novak from Chicago, IL. Thanks to S.M. Lockridge I’ve put almost 30 descriptive titles on this wallpaper. It’s amazing that we haven’t even scratched the surface… 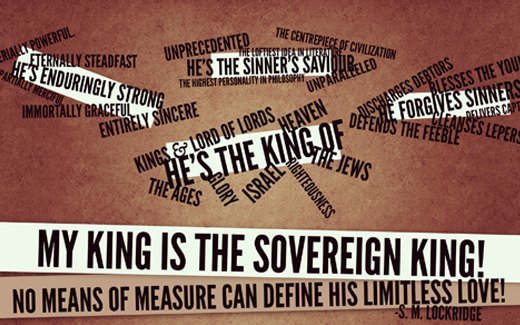 They Neither Sow Nor Reap

Created by Harold Sikkema from Hamilton, Canada. When this young sparrow hopped across my doorstep, I recognized her fragile predicament. Flightless and naive, she had little protection from predatory neighbourhood cats (and photographers). Relief came in the form of the bird’s extended family: mother and father, aunts, uncles, cousins… all encouraged her delicate wings to flutter on to safety. This July, I pray that you also will experience God’s nourishment flowing in the vessels of family and community. 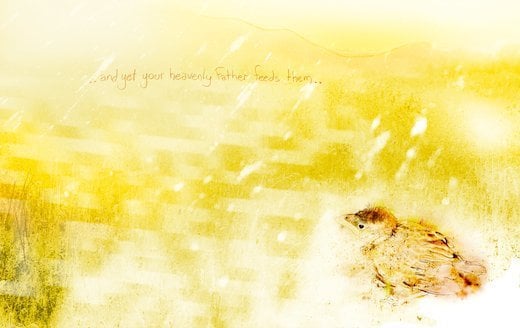 Created by Shannon Brown from Rockford, IL. [He rebelliously submitted 2 wallpapers; I allowed it since he’s this month’s featured designer] 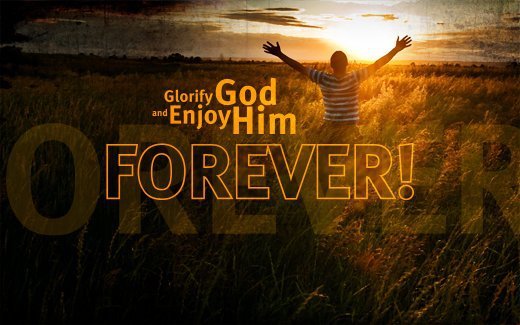 Free from the Curse

Created by Jeff Nine from Oklahoma City, OK. Have you been freed? 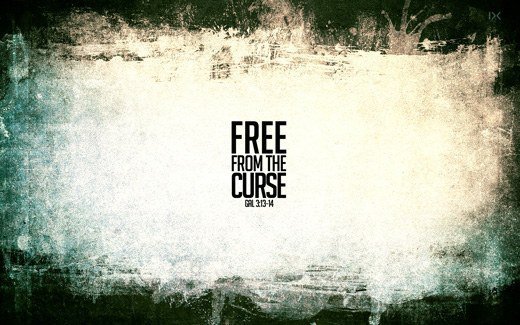 The Beauty of Summer

Created by Barbara Garrett from Long Beach, CA. Photo was taken on vacation in Germany, in a little town whose name I’ve forgotten! 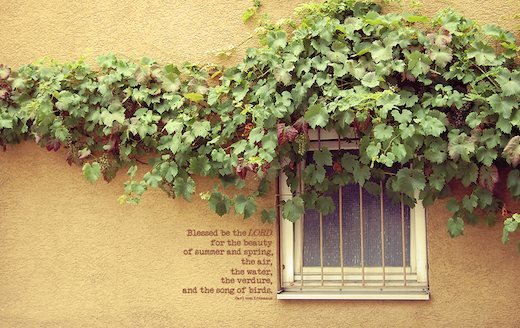 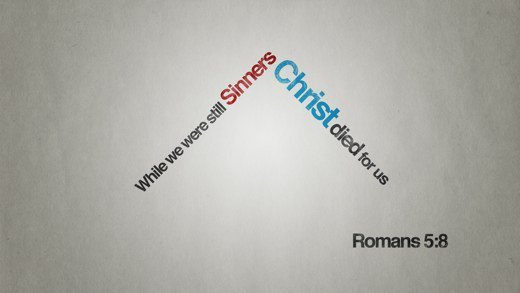 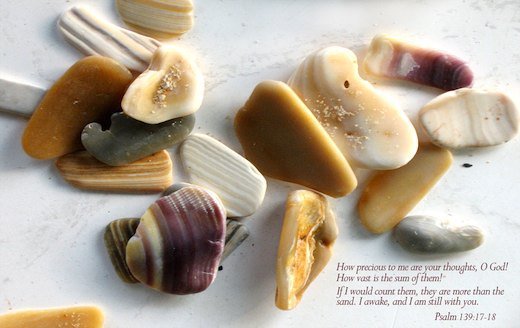 Created by Marie Nease from Lawrenceville, GA. The photo was taken in Costa Rica at La Playa Punta Uvita. One of my out-of-the-box sons lives in Costa Rica! 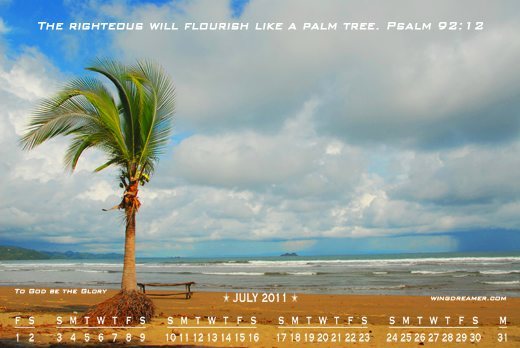 How did you get involved in graphic design?

Wow. This is going to be hard to keep brief, but I’ll give it a shot. In my teen years I became disillusioned by Christianity because of some pretty traumatic events that took place in my family. I ran as far away from God as I could get, but in July of 1989 God used a series of difficult circumstances that mercifully led me to Northland Baptist Bible College. The hardest part of going to Northland was giving up on a dream of enrolling at the Colorado Institute of Art. Aside from that difficulty, Northland was the perfect place for me at the time.

Early on in my education I had to choose a major so I chose Pastoral Studies and graduated in five years. My last year I discovered a state of the art, blazing fast Mac Quadra 650 (33Mhz; 32 MB Hard drive; 8 MB of RAM) which had Adobe Illustrator 3.0 and Photoshop 2.5 on it. I was hooked and began avoiding my school work to teach myself this amazing software. While my grades struggled a bit, my knowledge of Illustrator and Photoshop increased greatly.

Because I had always dreamed of going into some sort of art field and had taken a number of art classes throughout my high school years, the design process came pretty easily to me. It was simply a matter of taking what I had in my head and getting it to paper via the computer. During my last year of college, I asked if I could take a stab at designing the newsletter for the school and was granted the opportunity. At the end of that year, I was asked to stay on as the graphic designer and help set up an in-house publications department. From that point on there has been no looking back. In retrospect it is so neat to see how God graciously gave me the career I always wanted. He just happened to have a different path of getting me there.

How does being a Christian influence you as a graphic designer? What difference does it make?

For a long time I really struggled, questioning whether what I did for a living had any lasting meaning. I had always thought that genuine Christian service was being a pastor or missionary. During those times I would lament that I made paper look pretty which people would look at, wad up, and throw away. Over time, however, as I’ve embraced the importance of the local church along with the universal church, I’ve realized that I can use my talents and add them to the chorus of Christians around this world to be a reflection (albeit a dim one) of the greatness of the Father. I began to see myself as part of a larger band of believers (whether they be Christian mechanics, bloggers, pastors, doctors, or factory workers) who were linking arms for the kingdom of God.

Being a Christian has helped me strive for excellence at a different level than I did before. Rather than trying to build my own portfolio and advance my career, what drives me now is to be a blessing to those I work for and pray that my design helps to advance their message. (Of course, there is a little extra oomph in my effort when their message is Gospel-centered and focused on the greatness of God.)

What are some of your favorite books?

I have to humbly admit that reading is a shortcoming in my life. I often purchase books with determination to read them, only to get through about the first three chapters before something distracts me (usually something to do with parenting or work). Thus the book finds it way onto my shelf of partly read books as I succumb to the overwhelming guilt of not getting them all read. Thanks a LOT for the question!p>

I am always drawn to books about Jesus and His life. One slightly obscure book that increased my love for Him was Christ Precious: To Those That Believe by John Fawcett.