Much of life is an attempt to bring order from chaos. The pastor who sets out to prepare a sermon fills his mind with information and then needs to arrange it according to a unified theme. The author who sets out to write a book collects information from a hundred sources and then needs to lay it out in a logical manner. Ministries, marketing campaigns, fundraising drives, and even family vacations begin as chaos and eventually come to a state of order. A tool I have found especially helpful in bringing order from the chaos of a million ideas is mind mapping software.

A mind map is a kind of diagram that organizes and displays information. It traces the relationship between a single core concept and its many subordinate concepts. As the name indicates, it provides a means to “map out” an idea.

It is helpful to think of a mind map as being like a tree composed of a trunk and branches. The trunk is the core concept, the big idea—The Gospel According to Mark, Our Family Vacation, My Great New Book. The branches are the major subordinate concepts that will form the structure as the big idea develops—the sermons in the series on Mark, the days of the family vacation, the chapters of the new book. Each of those major subordinate concepts can have branches of its own—the main points of each sermon, the highlights for each day, the structure of the chapters. Where the analogy of a tree breaks down is in the visual representation, since a mind map tends to develop a radial or hub-and-spoke structure.

Here is a simple example. You will see that the core concept is literature. The major branches are genres—fiction, poetry, crime, business, and so on. Each of those branches has two more, one for authors and one for books. They, in turn, have their own branches for noteworthy names and titles. The result is an at-a-glance collection of literature according to genre. 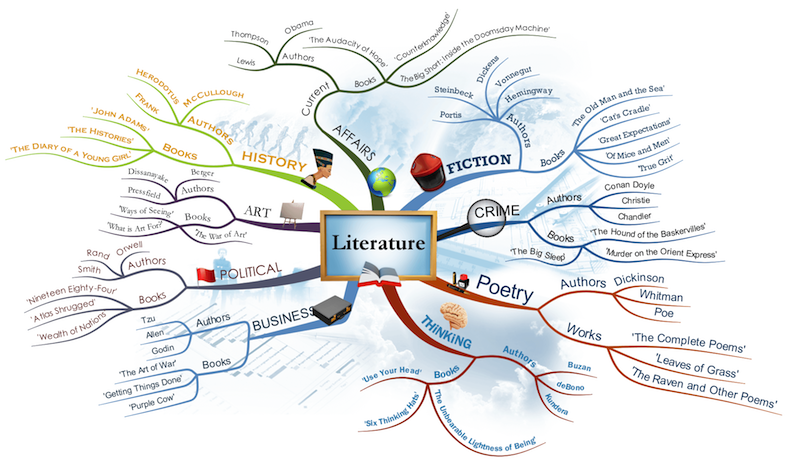 Where I find mind maps especially helpful is in planning books, article series, events, or even ministries. Whenever I have one core concept and wish to expand it into something prominent and logical, I find myself opening up my mind mapping software.

For example, I recently prepared a series of articles on Aging Gracefully. Before I typed the first words, I began to collect ideas in my mind mapping software. As I read, as I studied, and as I pondered, I erased some ideas and added others. I began to logically organize them, reorganize them, re-reorganize them, and to establish relationships between them. I eventually ended up with this: 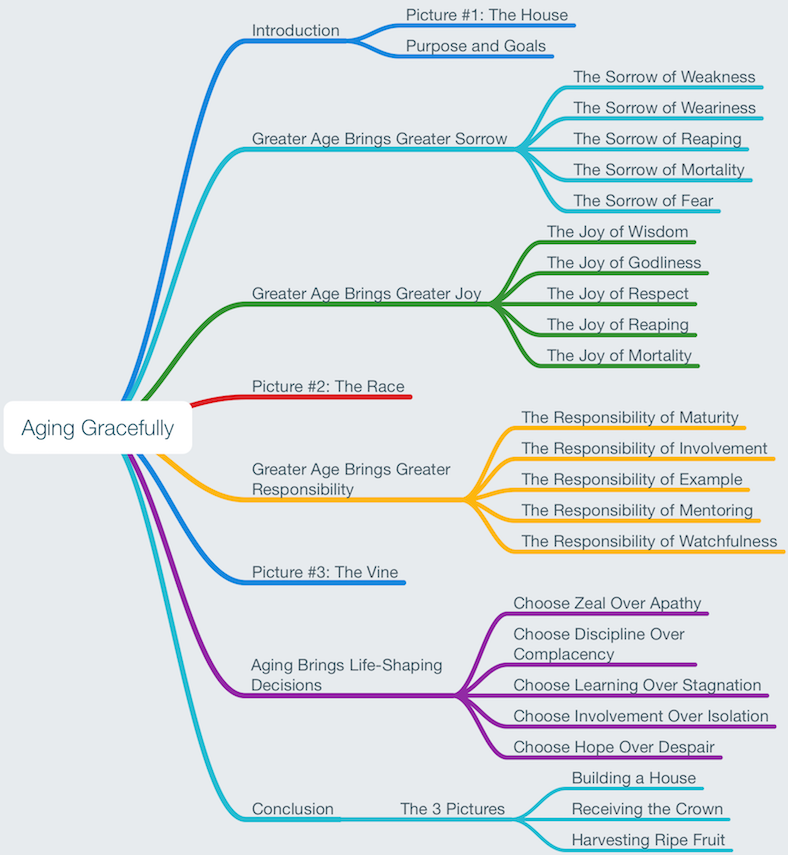 The core concept is Aging Gracefully and the major branches are the articles and the headings within the articles. I made a few mid-course corrections, but on the whole I stuck with this structure as I wrote.

Another recent series is The Commandment We Forgot, and in that case I used the mind map in two ways. I laid out the series as with Aging Gracefully, but I used the other side to display the pertinent Bible texts with their themes. This provided a helpful “at-a-glance” list of the major passages I would need to account for. 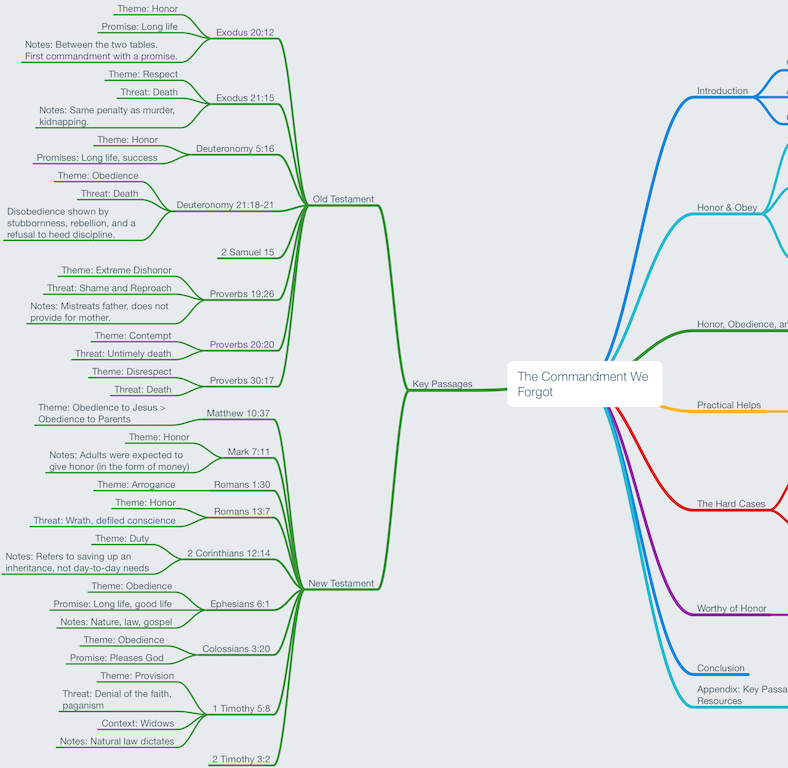 Mind mapping has become an important tool and one I rely on whenever I need to bring order from the inevitable chaos of my ideas.

My preferred mind mapping software is MindNode. I picked it up when it was the App Store’s free app of the week and have never looked back. It is Mac-only and available on both iOS and OS X. I have also used iThoughtsX and found it helpful. It, too, is available only on iOS and OS X, though a Windows version is in open beta. There are many other options to check out such as XMind (Mac/Windows/Linux), MindMup (browser-based), and even the open source FreeMind (Windows/Mac/Linux).