I have once again received stacks of books through the month that is now drawing to its end. I sorted through them all and wanted to tell you about those that I consider most notable. In each case I’ve included the editorial description so you can learn a little bit about it. (Also see: New and Notable Christian Books for Children and Books To Read As You Prepare for Easter.) 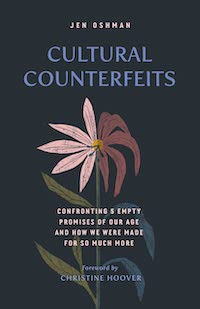 Cultural Counterfeits: Confronting 5 Empty Promises of Our Age and How We Were Made for So Much More by Jen Oshman. “In today’s culture, women and girls are influenced by idols that promise purpose and meaning for their lives—outward beauty and ability, sex, abortion, and gender fluidity. Christian women aren’t exempt from these temptations either, and can even elevate good things like marriage and motherhood to the status of idolatry. Women may sense that these idols are hollow and leave them feeling unsettled, but where should they turn instead? In Cultural Counterfeits, Jen Oshman encourages women to reject the empty, destructive promises these idols offer and embrace something much more satisfying.” (Buy it at Amazon) 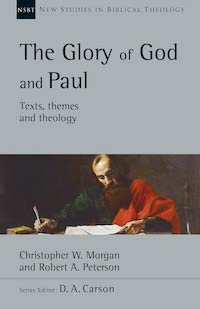 The Glory of God and Paul: Themes, Texts, and Theology (New Studies in Biblical Theology) by Christopher W. Morgan & Robert A. Peterson. “The apostle Paul’s theology of glory has its foundations in the biblical drama of creation, fall, redemption, and consummation, and in the identity of Jesus as revealed in his teachings, life, death, and resurrection. The triune God, who is intrinsically glorious, graciously and joyfully displays his glory, largely through his creation, human image-bearers, providence, and redemptive acts. God’s people respond by glorifying him. God receives glory and, through uniting his people to Christ, he shares his glory with them–all to his eternal glory. Christopher Morgan and Robert Peterson explore the glory of God in Paul’s letters with regard to the Trinity, salvation, the resurrection, the new covenant, the church, eschatology, and the Christian life. God intends his glory to impact many areas of believers’ lives: their gradual transformation from glory to glory occurs as they meditate and reflect on the splendor of the Lord.” (Buy it at Westminster Books or Amazon) 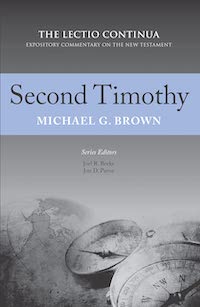 Second Timothy: The Lectio Continua Expository Commentary on the New Testament by Michael G. Brown. “Second Timothy encourages pastors to guard, entrust, suffer for, and above all, preach the gospel. Yet it is also full of encouragement for Christians living in a hostile world. Like Timothy, we need reminding that ‘God has not given us a spirit of fear, but of power and of love and of a sound mind.’ We need to ‘be strong in the grace that is in Christ Jesus’ and confident in the Scriptures, which are ‘given by inspiration of God.’ And we need to hope in Christ’s return, when He will award the crown of righteousness ‘to all who have loved His appearing.’ Michael G. Brown’s exposition of 2 Timothy is not only Christ-centered, redemptive-historical, and gospel focused, but also packed with pastoral and practical application.” (Buy it at Westminster Books or Amazon) 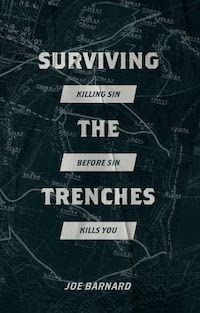 Surviving the Trenches: Killing Sin Before Sin Kills You by Joe Barnard. “Christian men today are unprepared for the reality and scope of spiritual warfare they face. Some go about their lives naively ignoring the power that spiritual forces like sin and Satan have in their lives. Joe Barnard has written a book to help men not only wake up to the existence of sin in their lives, but, in the power of the Holy Spirit, to tackle it head on. This may seem like a daunting task. Although few would admit it publicly, privately many share the deep anxiety that the resources of the gospel are inadequate to deal with – not the guilt of sin – but the power of sin. Sin may look like an insurmountable problem when measured by the stature of a fallen man, but to God, sin is no more than a weed planted in sand. This book is for men who are willing to fight and it will arm them for the task at hand.” (Buy it at Amazon) 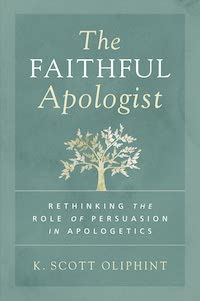 The Faithful Apologist: Rethinking the Role of Persuasion in Apologetics by K. Scott Oliphint. “As Christians, we’re called to give an answer for the hope we have in Christ. But too often, this task can feel like we’re doing PR work for God, limiting our apologetic work to a series of strategies and tactics. In The Faithful Apologist, Scott Oliphint shows that this doesn’t have to be the case. He provides a cross-centered foundation for Christians to explain their faith in a welcoming and winsome manner that avoids any burden to “sell” Christianity to non-Christians. Drawing from the rich tradition of Reformed apologetics, Oliphint proposes a marriage between wisdom and persuasion in faith conversations. He shows that, when our faith is grounded in the Triune God and his sovereignty, our attempts to defend it will grow more confident and convincing. Accessible and thoroughly rooted in Scripture, this book takes the anxiety out of apologetics by revealing that success is not measured in the number of minds we change, but in our faithfulness to God, the Divine Persuader.” (Buy it at Westminster Books or Amazon) 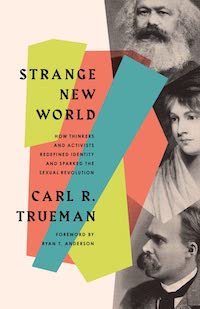 Strange New World: How Thinkers and Activists Redefined Identity and Sparked the Sexual Revolution by Carl Trueman. “How did the world arrive at its current, disorienting state of identity politics, and how should the church respond? Historian Carl R. Trueman shows how influences ranging from traditional institutions to technology and pornography moved modern culture toward an era of ‘expressive individualism.’ For fans of Trueman’s The Rise and Triumph of the Modern Self, Strange New World offers a more concise presentation and application of some of the most critical topics of our day. Also available is the Strange New World Study Guide, a helpful companion for both individuals and groups.” (Buy it at Westminster Books or Amazon) 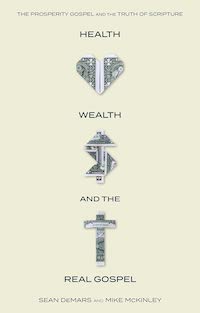 Health, Wealth, and the (Real) Gospel: The Prosperity Gospel Meets the Truths of Scripture by Sean DeMars and Mike McKinley. “Having experienced its damaging effects, Sean DeMars and Mike McKinley set out to reveal the insidious toxicity found in the prosperity gospel. Naming and claiming promises of material blessing for those who believe enough may seem at first glance to be biblical but turn out to be a distortion of God’s truth. Beginning by countering claims made by the prosperity gospel with what scripture actually teaches, they highlight the places in scripture that stand directly opposed to prosperity teachings. They explore what the Bible teaches about whether people who believe false doctrine are eternally saved, and how to examine our hearts for a prosperity–style understanding of God.” (Buy it at Amazon) 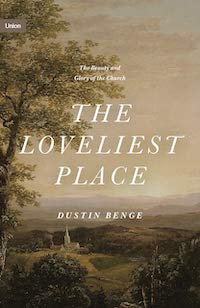 The Loveliest Place: The Beauty and Glory of the Church by Dustin Benge. “Dear. Precious. Lovely. The Bible describes the church in extraordinary ways, even using beautiful poetry and metaphors. How does this compare to how Christians today describe the church? In The Loveliest Place, Dustin Benge urges Christians to see the holy assembly of God’s redeemed people in all its eternal beauty. He explains what makes the church lovely, including the Trinitarian relationship, worship, service, and gospel proclamation. For those who have never learned to view the church as God sees it, or have become disillusioned by its flaws, this book is a reminder that the corporate gathering of believers is a reflection of God’s indescribable beauty.” (Buy it at Westminster Books or Amazon) 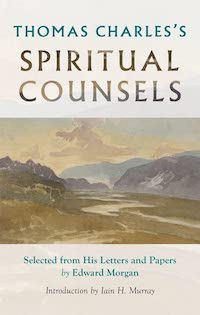 Thomas Charles’ Spiritual Counsels: Selected From His Letters and Papers by Edward Morgan and Thomas Charles of Bala by John Aaron. These two books from Banner of Truth go together, one as a biography and the other as a book of letters by the subject of that biography. Here’s the description of the latter: “The North of Wales in the 1770s was one of the least Christian parts of Britain. The next three decades brought a transformation akin to that of the apostolic era and at the centre of the change was Thomas Charles, ‘the Lord’s gift to North Wales’. Debarred from the pulpits of his own denomination, and dependent on his shop-keeper wife at Bala, Charles quietly became the leader of the people (‘Calvinistic Methodists’) whose God-anointed witness gathered thousands to the gospel. This astonishing advance involved Bible distribution, the use of circulating schools, preaching, and publishing. More than all these things, there was an outpouring of the Spirit of God and the most enduring lessons of the period have to do with the quality of spiritual life which was then recovered. This volume, first published in 1838, shows us both what that life was in Thomas Charles’ own experience and how wisely he taught it to others.” (Buy Thomas Charles of Bala at Westminster Books; Buy Thomas Charles’ Spiritual Counsels at Westminster Books) 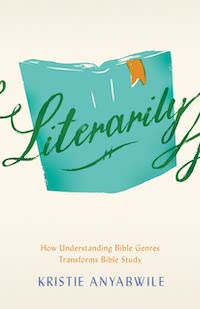 Literarily: How Understanding Bible Genres Transforms Bible Study by Kristie Anyabwile. “A lot of times, we treat Scripture like it’s all the same from Genesis to Revelation. After all, it only has one Author. Isn’t it just one big book, identical from beginning to end? While it’s true that the Bible is unified, it is also diverse. The Bible can be grouped according to key categories, called genres, that help us to read and properly interpret the Scriptures. An understanding of these genres, and the literary themes and devices used within them, makes all the difference when encountering God’s Word. Long-time Bible teacher Kristie Anyabwile discovered as she prepared her lessons that a single inductive approach doesn’t do justice to the variety of genres that make up the Word of God. Because Scripture is a collection of writings that spans 1,500 years, many literary styles are represented and each must be taken into account for the fullest understanding of God’s Word. Kristie shows you the immense value of studying the Bible literarily—that is, according to the literary style presented in a particular book, chapter, or passage.” (Buy it at Amazon) 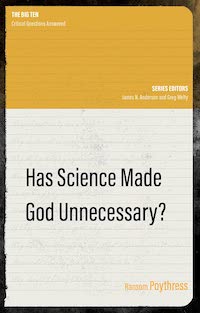