This sponsored post was prepared by John M. Frame. 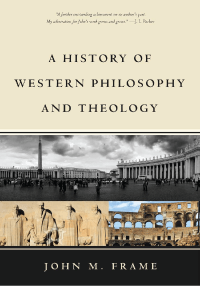 The history of philosophy (and of theology, which closely parallels it) is pretty exciting when you look at it through the lens of God’s Word. It challenges Christians today to resist the fashionable trends of secular thought, to resist temptations to compromise the truth for the sake of academic respectability. Living by faith in Jesus is important, not only in worship and moral living, but also in our intellectual decisions. That is my reason for writing my History of Western Philosophy and Theology, which I hope will encourage Christians to a bolder witness to thinking people of our day.

Many writers today extol the value of storytelling, so my new book will tell a story about philosophy, of all things. This story takes seven radical turns that I call convulsions. Convulsions happen because philosophy is central to our lives. Philosophies express our heart commitments and apply those commitments to all areas of life. When our philosophy is disturbed, everything else is affected. That makes for a dramatic story.

Here are the convulsions:

The story of philosophy should challenge both Christians and non-Christians to hear God’s Word as they develop their worldviews, for God’s Word teaches us how to think his thoughts. It also shows the importance of asking God for courage in what I call the “spiritual warfare in the life of the mind.” That warfare is not easy, as more and more cultural forces line up to marginalize the biblical view of the world. But God has promised us victory. In time, everyone will bow the knee as God brings every thought captive to the obedience of Christ.

Preorder A History of Western Philosophy and Theology at Amazon.com or go to Westminster Books to be notified when it is available.