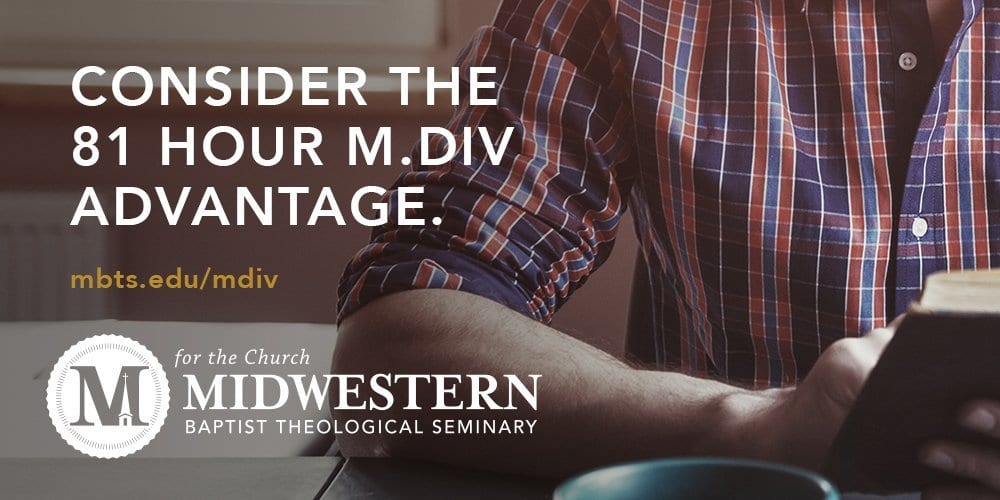 This sponsored post was prepared by Jason G. Duesing on behalf of MBTS.

In an effort to ensure the health of the types of trees that outlive most humans, often the best course of action an arborist has is counterintuitive. Instead of leaving a century old oak tree alone to weather the elements as it has for decades or attempt to survive encroaching modernity, the life of the tree is best prolonged after careful pruning or even replanting.

Yet, such preventative maintenance is sometime misunderstood even by those who want to see the life of the tree prolonged. In communities where a tree of such age exists, the oak represents memories and experiences worth preserving, almost at any cost, but even then replanting might seem like a threat to the integrity of the tree and thus the viability is questioned.

In the last 50 years of the world of theological education, the Master of Divinity degree has served as the oak of a seminary’s curriculum—and with good reason. As Midwestern Seminary President Jason K. Allen has noted, “In it one finds the complete toolkit for ministry service: Greek and Hebrew, New Testament and Old Testament, theology, church history, preaching, pastoral care and counseling, evangelism, missions, and much, much more.”

Yet, as Allen also has shared, as the M.Div crossed the millennium, it fell on hard times. What was once the universally agreed upon standard, now has it’s challengers in the form of “shorter and less rigorous Master of Arts degrees.” Thus, for this mainstay degree that has trained thousands, to reach the century mark of further effective training and formation, the time has come for it to be carefully pruned and replanted. For the M.Div to have new life extended for the 21st century and function as the century’s oak, revitalization must occur.

The MDiv: A History of Strength

For the first half of the 20th century, the standard theological degree offered by the seminaries was the Bachelor of Divinity. The term “divinity” was chosen as it reflected for centuries the formal study of theology in the Western tradition. By design, this theological degree was conceived and offered as a second undergraduate degree for those called to ministry and in many traditions served as the basic degree required for ordination.

There were graduate degrees available, such as the ThM, but such were designed for academic preparation in research and scholarship. However, by the middle of the century, many pastors and faculty members realized that what was taught and required had migrated toward graduate level education with a professional, rather than research, focus and, further, many pastors were starting to inquire about the creation of professional educational options provided at the doctoral level.

Following 1966 the new Master of Divinity (M.Div) arose as the agreed upon term for the basic professional degree offered by seminaries.

Throughout the decades that followed, schools would amend this ratio of core courses to elective courses as well as experiment by adding several M.Div concentrations that increased the total number of required courses. By the turn of the century, there settled a common understanding that while, in theory, the MDiv is a three-year degree, rarely does one or is one able to complete it in less than four years or longer. The advent and expansion of distance education through technology that culminated in what is now online education, has aided in making a three-year completion more realistic in terms of course offerings, but the 95+ required hours continue to make a three-year graduate an exception rather than the rule.

Replanting the MDiv for Future Strength

However, for ensured effectiveness in the 21st century, a pruning and replanting of this degree is required. Rather than minimize the theological and biblical studies core, which comprise the essence, or tip of the spear, of what students training for pastoral ministry need, the replanted M.Div should prune the number of free elective courses. While elective selection is important to students wanting to gain further language study or explore areas of interest for future doctoral study, the requirement of a dozen or more elective hours can actually serve to distract and prolong the student’s preparation. Less hours does not have to mean less quality.

With the growing pressures for today’s ministry student that include incumbent educational debt, the need to work while pursuing a seminary degree, and the urgency of the ministry task, the MDiv degree needs to come with an achievable and regular three-year completion rate. The replanted MDiv should provide the aspiring pastor with the core of theological training in the form of a professional graduate degree attainable in a window of time that keeps them from ever feeling like a professional student.

Further, with the increased desire and feasibility of pastors pursuing professional or research doctorates, a three-year MDiv can both prepare them well for advanced study and help them begin that study sooner. While this pruning and replanting might appear risky or even counterintuitive to even the most ardent supporter of high quality theological education, the future viability of the MDiv planted in a world of shortened Master of Arts degrees, requires at least steps of preventative maintenance, if not more holistic revitalization.

An Oak for a Century

Midwestern Seminary engaged in an extensive curriculum during 2013-2014 that resulted in the pruning and replanting of the M.Div degree. The new 81-hour Midwestern M.Div retains a 72 hour core curriculum, but has reduced the number of electives to 9 hours, thus allowing students to complete the degree in 3 years while providing them with the solid theological foundation needed to engage in pastoral ministry. (If students desire they can still pursue more specialized MDivs by adding an additional 9 hour concentration.) The Midwestern MDiv is truly a professional masters degree replanted for the church.

The Master of Divinity degree has served for the last 50 years as the very best degree available to aid and equip the one called to serve churches as pastor. To ensure that it remains so for another 50 years, the degree needs careful pruning and replanting. When that work is done well, this oak of a degree can stand strong and see the day when churches see it as their own healthy and thriving Century Oak.