The Lord be with you and the Lord bless you on this Good Friday.

Logos users: There is a new list of free and really cheap books and commentaries ready for you to look through.

There are quite a few books today on the Kindle deals page, and I’ll check for more in the morning.

A Victory for Reality

Carl Trueman: “The less-than-divine comedy that Professor Meriwether has had to endure has led to one good outcome: the verdict of the Sixth Circuit and its accompanying rationale. While university administrators around the country seem to be reconfiguring their job descriptions in order to be caregivers for the tender consciences of an era when politics is therapy, the judges of the Sixth Circuit retain an understanding of what education and its various institutions are actually meant to do.”

The Bodily Resurrection of Jesus

Start a free trial of the new streaming service, AGTV, and see what you’ll enjoy when you sign up. AGTV provides hundreds of hours of Bible-based teaching as well as films like American Gospel, Luther, Calvinist, Christianity Explored, and Epic. (Sponsored)

Sharon Sampson held a garage/moving sale and it got her thinking about the things that hinder us in our spiritual pursuits.

Praying in the No-Man’s Land

“Jesus alone could accomplish redemption for us. He alone would drink the cup of God’s wrath in our place. The loneliness of Jesus in the Garden in prayer symbolized the singular task He had come into the world to accomplish.”

Do Not Nod Your Head to Lies

Amy Hall says, “We’ve now reached a point in this country where a major news organization is making statements they know to be false—statements which every one of their readers knows to be false—and not only are people nodding their heads in agreement with those statements, but they’re also shaming anyone who would dare speak up against them.”

“I think about once every couple of months most ministers think their world or the church they serve is going to cave in. Very occasionally that is doctrinal in my experience. There’s some issue or doctrine where there’s a need for you to take a stand on. Ordinarily though in our context it is conflict, a complaining text, a relationship that is strained, a meeting that you are anticipating going wrong, even something as simple as someone asking can they meet up with you can cause anxiety. You fear the worst and spend a day thinking how you’re going to respond.”

The documentary focuses on the search and is a bit more of an episodic travel film…here is an entire episode free for the watching—episode 8, which follows me to India. 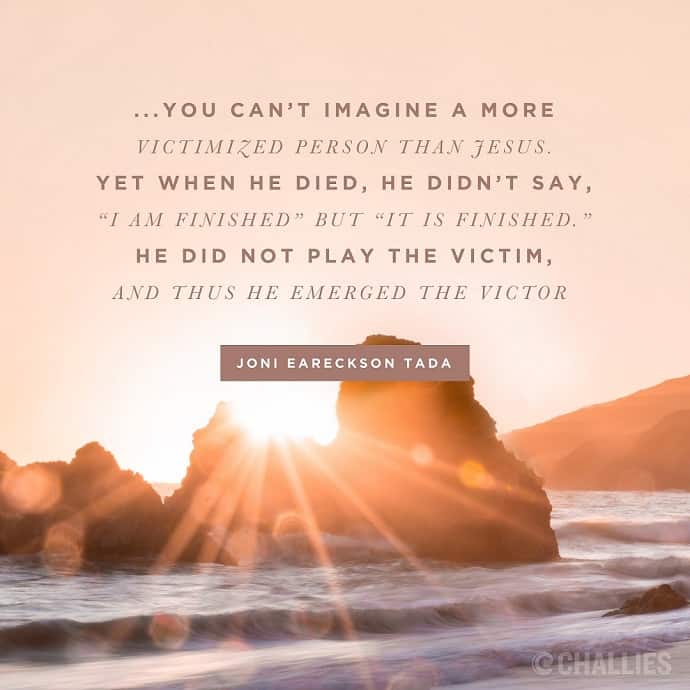 …you can’t imagine a more victimized person than Jesus. Yet when he died, he didn’t say, “I am finished” but “It is finished.” He did not play the victim, and thus he emerged the victor. —Joni Eareckson Tada