Interview with MLJ – Here’s an interview of Martyn Lloyd-Jones that has just been posted to YouTube for the first time. “The program was one of a series made by the television company concerned in which Joan Bakewell interviewed public figures of all stripes who were trying to change society in some form or other, and so it was not religious programming – It had a broader mandate.”

The Falls Church Anglican has two new albums out: We Will Proclaim is a live concert recording, and a really good one at that; I’ve been listening to it on repeat for a couple of weeks now. For Our Salvation is a Christmas album that is also worth checking out.

The Road to Apostasy – “When someone walks away from the faith it sends seismic ripples throughout the church. Somewhere amid the shock and emotions, we realize that we saw alarming signs but didn’t think they would materialize. I personally have seen this happen far too many times. In each case however, the steps, the path is strikingly similar. So, how does it happen? Let me walk you down the road to apostasy. This is intended to illuminate this dark and often camouflaged path.”

9 Lies the Media Tells – Frank Viola “identified nine common lies perpetuated by people in the media. Granted, there are enough vocal evangelicals to bolster each of these stereotypes, so the media isn’t completely responsible. But nuance is necessary here. Thus this post.”

God demands the tithe, deserves the offerings, defends the savings and directs the expenses. —Stephen Olford 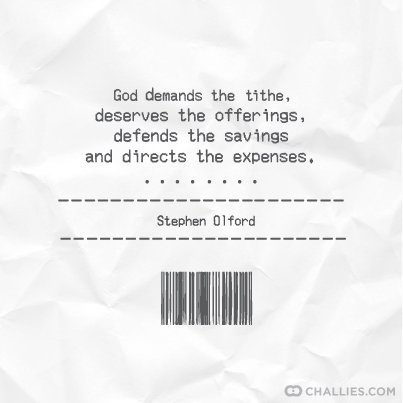