Just a reminder that I am taking this week off, so will not be updating the Kindle deals too often (though there are a few there now).

Do I Need to Understand the Trinity to Be Saved?

I have seen a few variations on this question over the years, but especially appreciated this treatment from John Piper.

30 Years Ago, Romania Deprived Thousands of Babies of Human Contact

This longform article from The Atlantic is worth the read. “For his first three years of life, Izidor lived at the hospital. The dark-eyed, black-haired boy, born June 20, 1980, had been abandoned when he was a few weeks old. The reason was obvious to anyone who bothered to look: His right leg was a bit deformed. After a bout of illness (probably polio), he had been tossed into a sea of abandoned infants in the Socialist Republic of Romania.”

Theological Triage in the 21st Century

Trevin Wax: “These controversies raise an important question: What constitutes false teaching? How do we know the difference between areas in which we may ‘agree to disagree’ or areas where the compromise is so dangerous as to obscure the gospel? What do we do when doctrine divides people who love Jesus, believe the Bible, and agree on the fundamentals of the faith?” He looks to a couple of recent books to find some suggestions.

If you wear glasses and find yourself wearing a mask, you’ve run into that annoying fogging thing. This guy tried all the solutions and found that unfortunately only the clunkiest ones actually work.

The Danger of an Open Bible

Sometimes an open Bible is a bigger danger than a dusty one. “Just because 100 million Bibles are being sold each year doesn’t mean 100 million people are reading it. And just because someone’s reading it doesn’t mean they’re reading it correctly. In fact, while keeping your Bible closed is a really bad idea, we should also admit that few things are more dangerous than an open Bible. History and Scripture tell us the Bible has been used to do more damage than any other weapon Satan uses.”

“It usually happens when the topic is something controversial – like politics during an election year. You see people writing things in Tweets and Facebook posts, and in comments about such posts, that they would never say to the face of another living human being. Your kindly little hymn-singing great-grandmother suddenly turns into a foul-mouthed, cruel, and vindictive Mr. Hyde – right before your eyes. And you think to yourself, ‘Granny?’”

What’s the cure for envy? I can’t say it better than Charles Spurgeon: “The cure for envy lies in living under a constant sense of the divine presence, worshiping God and communing with Him all the day long, however long the day may seem…The more of heaven there is in our lives, the less of earth we shall covet. The fear of God casts out envy of men.” 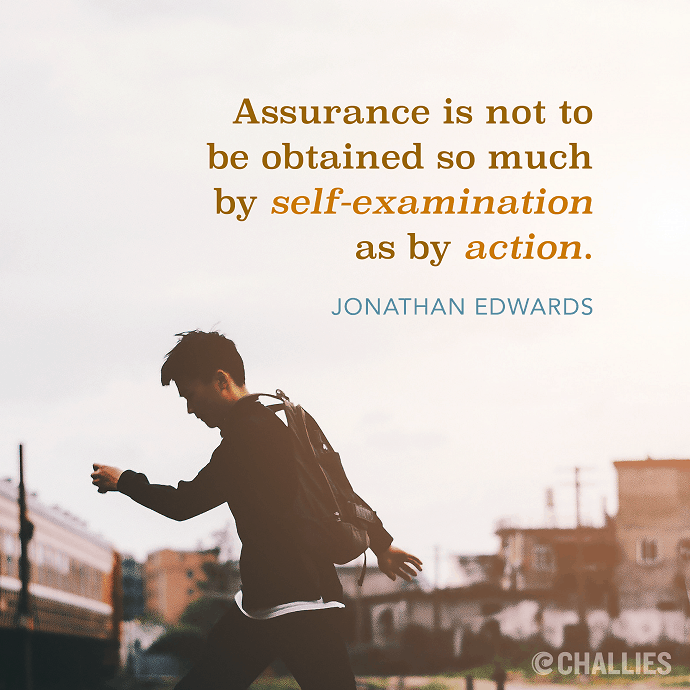 Assurance is not to be obtained so much by self-examination as by action. —Jonathan Edwards