The Christian Origins of Victimhood Culture

“One more thing that is worth noticing about the rise of victimhood culture is how far it reflects an essentially Christian moral imagination.” Interesting…

“Being thankful for the small things is a great entry into turning our thoughts around and focusing them on the Lord.”

“From the Okavango to Chobe to the Kalahari, Botswana is home to some of the best wildlife in the world. This is a quick glimpse into what you may encounter while visiting this beautiful country.”

Technology is Not a Drug: Debunking the Biggest Myths About ‘Technology Addiction’

“How concerned should people be about the psychological effects of screen time? Balancing technology use with other aspects of daily life seems reasonable, but there is a lot of conflicting advice about where that balance should be. Much of the discussion is framed around fighting ‘addiction’ to technology. But to me, that resembles a moral panic, giving voice to scary claims based on weak data.”

“At present, two popular–yet antithetical–positions about sexuality and identity exist within the orthodox Christian community. In their recently book Transforming Homosexuality, authors Denny Burk and Heath Lambert identify these as the traditional and neo-traditional positions. Both of these positions exclude from acceptable Christian behavior sexual acts that are outside of Scriptural marriage between one man and one woman. Also, both sides should acknowledge that even if they see the other side as wrong, they are Christian brothers aiming to work out a practical and biblical theology to minister to same sex attracted individuals.”

I Believe in Theistic Evolution

Don’t worry–it’s just a cheeky title. “It has long perturbed me that those who affirm or allow for Darwinian macroevolution to be compatible with a biblical worldview will sometimes call themselves ‘creationists’ or will claim to believe in/affirm biblical creation.  They do this knowing that biblical creation is usually understood to refer to a view that holds to God having created in six ordinary days on a timescale of some thousands (rather than millions or billions) of years ago.  By claiming to believe in creation they lay concerns to rest, whereas all they have really done is disguise their true position.”

I include this rare footage of the world’s tallest man because it’s interesting and also because it’s fun to think that Goliath was even taller.

Flashback: Every Test and Every Temptation

Life is full of difficult circumstances. Life inevitably involves circumstances that we would never have chosen on our own. Yet, the Bible assures, God does not work his grace in his people despite circumstances, but right through the middle of them. 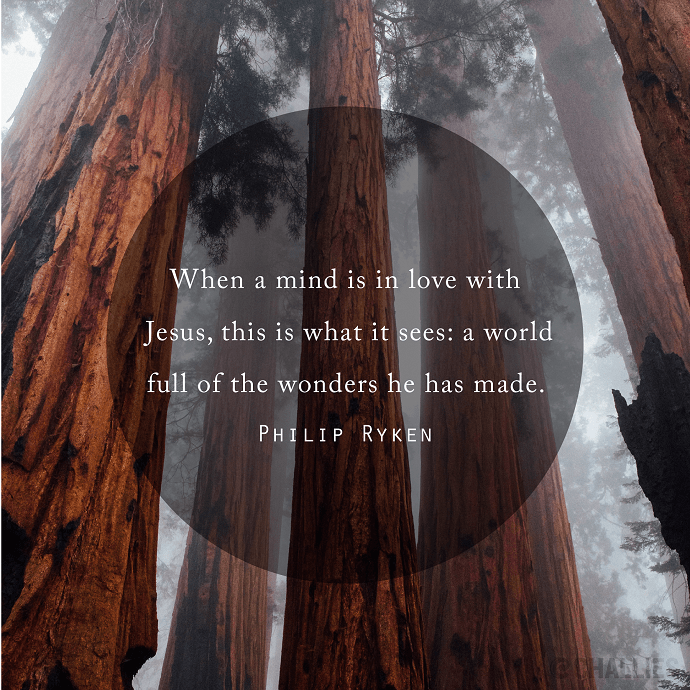 When a mind is in love with Jesus, this is what it sees: a world full of the wonders he has made. —Philip Ryken