There are once again some Kindle deals that may interest the collectors among us!

The Day I Ran From God

“The pursuit had begun. I knew God had drawn the bow of his wrath, and he had aimed it directly at me. The slightest tinge of my guilty conscience made the creaks and groans of the bowstring howl in my ears as it strained for release. I looked for places to hide, but wherever I went, he was there. I first tried to find refuge in morality. I thought, if I could be upright from this point on, then I should be fine. There were two problems with this…”

Not Home Yet: The Unfulfilled Longings of Nostalgia

Inonge Siluka reflects on the unfulfilled longings of nostalgia. “The feeling of longing to go back to another time; a good time, a time when things were simple, a time before everything changed; a time when loved ones were still here, the ‘happy place’. I am sure we can all relate to these feelings of nostalgia in one way or another. Nostalgia is often brought about by seemingly ordinary things: the smell or taste of food, a particular song or even a place. In my case, it is my home in Zambia.”

Over two years ago I was at Hobbiton in New Zealand and offered a few thoughts about the forthcoming Lord of the Rings TV series. I practically begged them not to make it sexually explicit. Yet, fairly predictably, it seems as if they will. This article discusses it in brief; I’m hoping we’ll see some others explain why Tolkien would never, ever sanction such a thing.

I’m fascinated by the way language evolves, and you can both see and hear how English has evolved in this video.

Jobless and Nearing Retirement Age—What To Do?

Chris Cagle does lots of good writing about retirement stewardship, and in this one he discusses the particular struggles that may come to those who lose their jobs near retirement.

The One Thing Every Sufferer Needs to Hear

This is worth pondering: “As a new creation in Christ, also live in an essentially different relationship to your own sinfulness. Your sin now afflicts you. The dross of your blind spots and besetting sins no longer defines or delights you. The sin that indwells becomes a form of significant suffering. What you once instinctively loved now torments you.”

A Fracture in the Stonewall

Carl Trueman (in an essay that could almost have come out of his forthcoming must-read book The Rise and Triumph of the Modern Self) writes about the cracks that are forming in the LGBTQ+ alliance. “There is a sense in which it is encouraging for conservatives to see some LGBTQ+ individuals breaking with the T and pointing to the nonsensical premises and authoritarian ambitions of the movement. The enemy of my enemy is something of a friend, as the LGBTQ+ movement itself shows. But I fear the reality may be far different and less encouraging.”

It is something I see again and again, and something that baffles me every time: People who expect unbelievers to act like believers. So often I see Christians acting surprised that their non-Christian friends or family members are acting like non-Christians. 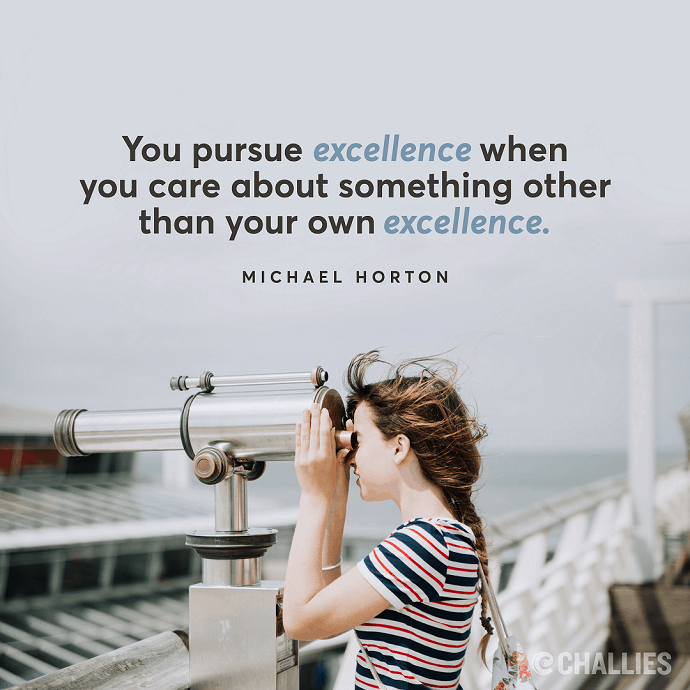 You pursue excellence when you care about something other than your own excellence. —Michael Horton