Today’s Kindle deals include a great Westminster Seminary Press edition of Machen’s classic Christianity & Liberalism that has all kinds of new essays and other content.

Cancelling the Weapons of “Cancel Culture”

We need to be careful that we don’t wield the world’s weapons. “It is obvious to all that 2020 has proven to be quite the revealing year for professing Christians. The way in which we deal with one another over our differences on conclusions about racial matters, masks, or governmental authority shows what is in our hearts. If you take to social media to publicly deride other believers (think John MacArthur) for taking a different stance than that you would have taken if you pastored a megachurch in California, you are fighting with the weapons of culture.”

Recovering the Lost Art of Edification

Jared Wilson: “I’ve watched over the last few months as church members run off pastors from churches, pastors run over people on social media, and Christians of all kinds have determined that people not their kind are responsible for everything wrong in the world. The world is on fire, and in some ways more dangerous than literal. Why are we doing this? A few reasons, I think…”

Evolution of the Alphabet (Video)

This is a really interesting look at the evolution of the alphabet from ancient phonetic forms to what we are accustomed to today.

Suicide of the Liberals

This lengthy article from First Things grapples with the strange reality that educated, liberal society tends to respond politely to the revolutions aimed at their destruction. “Not just lawyers, teachers, doctors, and engineers, but even industrialists and bank directors raised money for the terrorists. Doing so signaled advanced opinion and good manners. A quote attributed to Lenin—’When we are ready to kill the capitalists, they will sell us the rope’—would have been more accurately rendered as: ‘They will buy us the rope and hire us to use it on them.'”

The Tyranny of Progress

“Those who describe themselves as ‘progressive’ often have the upper hand in the church and culture because the label itself implies that making progress is a worthy goal. Progressives champion causes that would lead to a better state; they are progressing toward a better world. Anyone who opposes the cause of the “progressive” or raises concerns can quickly be cast as regressive, someone too comfortable in their ways or satisfied with the status quo. Progressives want change more than stability. Adaptation, evolution, forward momentum!” After all, as Trevin Wax points out, who would be against progress?

Stephen Nichols comments on the alarming results of Ligonier’s recent survey which found that 30% of evangelicals say that Jesus is not divine. (Which is to say that 30% of self-identified evangelicals belief a heresy!)

On Journaling Life: 10 Years and Counting

Ryanne shares some reflections on 10 years of consistent journaling—a habit many of us begin but soon abandon. “It may be tempting to abandon journaling because individual entries feel insignificant. Indeed, this fear of meaninglessness extends beyond journaling, contributing to heightened levels of anxiety and depression. Journaling, however, ought to reveal the opposite: that all of life is interconnected and that the mundane is meaningful.”

Flashback: Built On a Single Behavior

God does not measure by a single behavior, but by complete and utter conformity to his perfect law. This truth will either drive you to despair or drive you to Christ, the One who lived a completely righteous life and offers his righteousness to those who have none of their own. 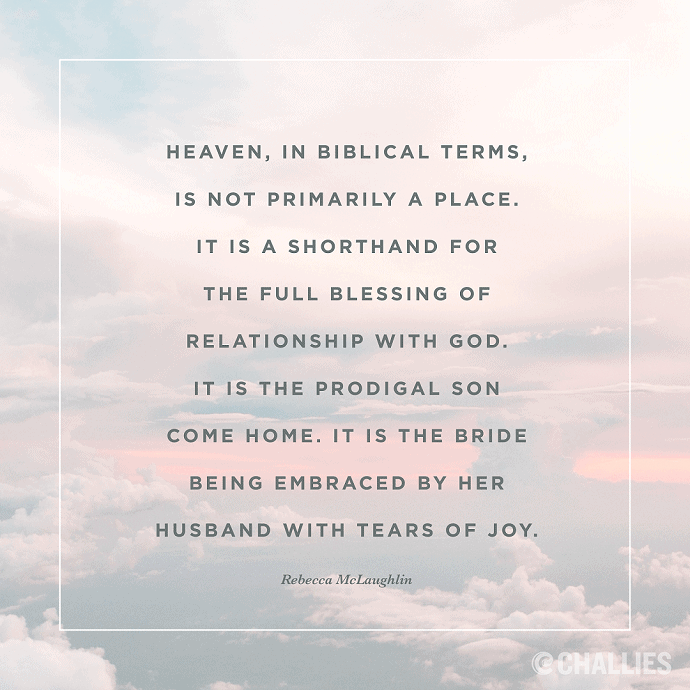 Heaven, in biblical terms, is not primarily a place. It is a shorthand for the full blessing of relationship with God. It is the prodigal son come home. It is the bride being embraced by her husband with tears of joy. —Rebecca McLaughlin